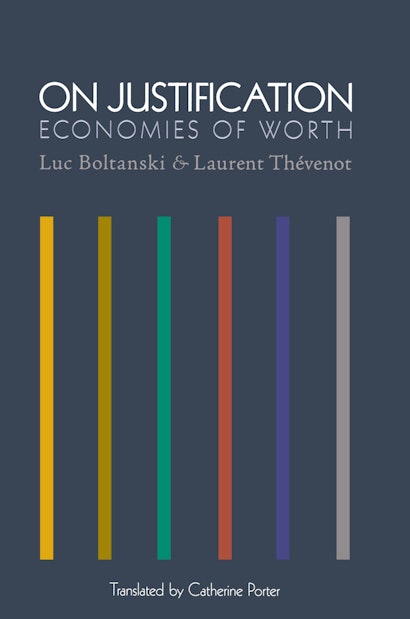 A vital and underappreciated dimension of social interaction is the way individuals justify their actions to others, instinctively drawing on their experience to appeal to principles they hope will command respect. Individuals, however, often misread situations, and many disagreements can be explained by people appealing, knowingly and unknowingly, to different principles. On Justification is the first English translation of Luc Boltanski and Laurent Thévenot’s ambitious theoretical examination of these phenomena, a book that has already had a huge impact on French sociology and is likely to have a similar influence in the English-speaking world.

In this foundational work of post-Bourdieu sociology, the authors examine a wide range of situations where people justify their actions. The authors argue that justifications fall into six main logics exemplified by six authors: civic (Rousseau), market (Adam Smith), industrial (Saint-Simon), domestic (Bossuet), inspiration (Augustine), and fame (Hobbes). The authors show how these justifications conflict, as people compete to legitimize their views of a situation.

On Justification is likely to spark important debates across the social sciences.

"Boltanski and Thévenot's On Justification is one of the most important contributions to the field of economic sociology in the past decade. It does not fit neatly into any of the major theoretical perspectives that currently dominate the field—institutionalism, organizational ecology, network analysis, rational choice, or transaction-cost economics. But precisely because it is so original, it has great potential to chart new territory and enliven debates. The book has already had an enormous impact in France, where it is one of the founding documents of the 'economics of conventions' school. It is sure to have a big impact in sociology in the United States and Britain too. I could list at least twenty major sociologists who have asked me when the book will be translated."—David Stark, Columbia University