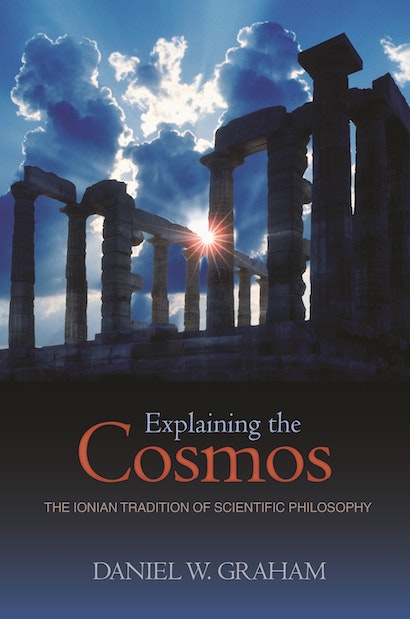 Explaining the Cosmos is a major reinterpretation of Greek scientific thought before Socrates. Focusing on the scientific tradition of philosophy, Daniel Graham argues that Presocratic philosophy is not a mere patchwork of different schools and styles of thought. Rather, there is a discernible and unified Ionian tradition that dominates Presocratic debates. Graham rejects the common interpretation of the early Ionians as “material monists” and also the view of the later Ionians as desperately trying to save scientific philosophy from Parmenides’ criticisms.


In Graham’s view, Parmenides plays a constructive role in shaping the scientific debates of the fifth century BC. Accordingly, the history of Presocratic philosophy can be seen not as a series of dialectical failures, but rather as a series of theoretical advances that led to empirical discoveries. Indeed, the Ionian tradition can be seen as the origin of the scientific conception of the world that we still hold today.

Daniel W. Graham is A. O. Smoot Professor of Philosophy at Brigham Young University. He is the author of Aristotle's Two Systems; editor of the two-volume collected papers of Gregory Vlastos, Studies in Greek Philosophy (Princeton); and translator of and commentator on Aristotle: Physics, Book VIII. He is a member of the editorial boards of Apeiron and History of Philosophy Quarterly.

"Essential. . . . Due to the depth and breadth of its research, its lucidity, and the cogency of its arguments, Explaining the Cosmos will undoubtedly become a new standard against which future work on the pre-Socratics is measured."—Choice

"Graham harks back to Harold Cherniss's critical reading of Aristotle as more of an engaged interpreter than objective historian of the Presocratics. . . . This is a genuine achievement. . . . [M]uch of what Graham offers . . . is persuasive, illuminating, and occasionally brilliant."—Simon Trépanier, Isis

"[S]cholars everywhere will be grateful for this engaging intellectual adventure."—Robert Hahn, Journal of the History of Philosophy

"Daniel Graham's Explaining the Cosmos offers a new take on the Presocratic natural philosophers, arguing that the long-dominant account of the early Ionians as material monists is mistaken. The book makes a significant contribution. It is quite readable, and original. In sum, it is a fine work."—Allan Silverman, Ohio State University

"Daniel Graham concentrates chiefly on the early Ionian thinkers as the key to a new understanding of the history of Presocratic philosophy. The result is a serious and coherent account of the history of an important strain of Greek philosophical thought before Plato. The book is carefully argued and clearly written, and makes an excellent contribution to our understanding of Presocratic philosophy."—Patricia Curd, Purdue University