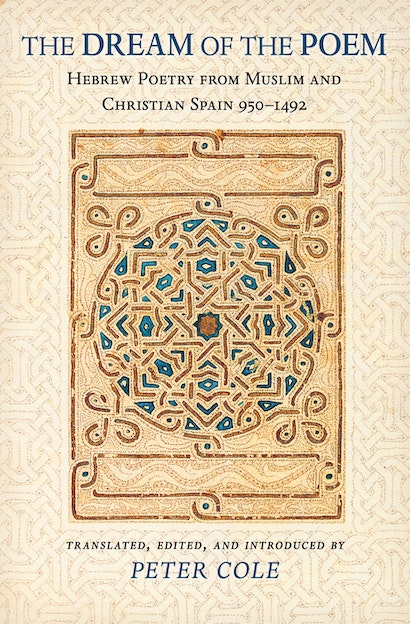 Hebrew culture experienced a renewal in medieval Spain that produced what is arguably the most powerful body of Jewish poetry written since the Bible. Fusing elements of East and West, Arabic and Hebrew, and the particular and the universal, this verse embodies an extraordinary sensuality and intense faith that transcend the limits of language, place, and time.


Peter Cole’s translations reveal this remarkable poetic world to English readers in all of its richness, humor, grace, gravity, and wisdom. The Dream of the Poem traces the arc of the entire period, presenting some four hundred poems by fifty-four poets, and including a panoramic historical introduction, short biographies of each poet, and extensive notes. (The original Hebrew texts are available on the Princeton University Press Web site.) By far the most potent and comprehensive gathering of medieval Hebrew poems ever assembled in English, Cole’s anthology builds on what poet and translator Richard Howard has described as “the finest labor of poetic translation that I have seen in many years” and “an entire revelation: a body of lyric and didactic verse so intense, so intelligent, and so vivid that it appears to identify a whole dimension of historical consciousness previously unavailable to us.” The Dream of the Poem is, Howard says, “a crowning achievement.”

Peter Cole is a poet and translator of Hebrew and Arabic poetry. He has received numerous awards for his work, including prizes from the Times Literary Supplement and the Modern Language Association, and a Guggenheim Foundation Fellowship. Winner of the 2004 PEN-America Translation Award, he lives in Jerusalem, where he coedits Ibis Editions. He was named a MacArthur Foundation Fellow in 2007.

"Virtually stagnant since late Biblical times, Hebrew poetry and the language itself would be transformed by a succession of poets of genius and their imitators. In Peter Cole's rich new anthology, the extent of their astonishing achievement is fully revealed for the first time in English.... His versions are masterly."—Eric Ormsby, New York Times Book Review

"Perpetually astonishing. The central figures in Peter Cole's anthology are great by any standards.... [They] provoke love in any reader of Hebrew literature, and by [a] miracle of Cole's own creation, in any reader of little or no Hebrew who directly confronts the work of this major poet-translator.... Superb."—Harold Bloom, New York Review of Books

"The book is a treasure trove, a labour of love and exceptional erudition, which will open up to the reader a world of poetry and culture as rich as anything in human civilization."—Times Literary Supplement

"...[Cole] has performed an enormous service and produced a book which is by turns moving, charming, and funny. No one after this will be able to write a book on medieval poetry without taking the Hebrew and Arabic poets of Spain into account."—Gabriel Josipovici, Times Literary Supplement

"Praise for Peter Cole's Selected Poems of Solomon Ibn Gabirol and Selected Poems of Shmuel HaNagid (both Princeton): "Cole's vigorous inventive translation is equal to the task of rendering [the] work [of a poet] whose range encompassed commerce and God, war and wine. HaNagid emerges as a man of identifiably modern—even enlightened—breadth, even as the rest of Europe languished in its Dark Ages.""—Publishers Weekly

"Traversing five centuries, four hundred poems, and fifty poets, the anthology represents a remarkable literature that evolved and flourished between the East and the West, between sacred and the profane, and amid the collision and collusion of traditions, religions, and languages . . . all bolstered by Cole's extensive introductions, biographies, commentary, and glossaries."—American Poet

"Peter Cole offers us an unprecedented gift, bringing to life a body of Hebrew poetry that, wrote Harold Bloom, can at its best 'rival the magnificences of Scripture'....[Cole's] achievement in bringing us this volume is as death-defying an act as any ever undertaken by the poets he presents within its pages."—Esther Allen, Bomb Magazine

"The Dream of the Poem offers English readers a substantial, unfailingly elegant anthology of medieval Hebrew poetry in translation. Overall, it is a remarkable achievement. . . . [I]t brings to life a world we have long yearned to share more eloquently with those who could not read it for themselves."—Susan L. Einbinder, Speculum

"The anthology appears in a series devoted to translated poetry, and is designed to be accessible to general readers. Yet it is also suitable for use as a course book: there are helpful introductions and annotations, and the publisher has made the Hebrew originals available on-line. The book is a true labour of love, and should win new readers to this wonderfully rich body of poetry."—Nicholas De Lange, Journal of Jewish Studies

"Seldom if ever has medieval Iberian literature received such attention from the English-speaking academic world, much less the larger American reading public, and it speaks to the importance of Cole's translations, which have given voice to this material in a way that other translations have not. For scholars of Spanish literature these translations are important in that they make accessible to non-Hebrew speakers a large body of Judeo-Iberian poetry, some of it not previously available in translation."—Michelle Hamilton, Bulletin of Spanish Studies

"The book constitutes a milestone that will not be easy to surpass. May this book inspire the next generation of researchers to develop further research aims in Medieval Hebrew literature!"—Arie Schippers, Review of Middle Eastern Studies

"The finest labor of poetic translation I have seen in many years.... An entire revelation."—Richard Howard, University of Houston