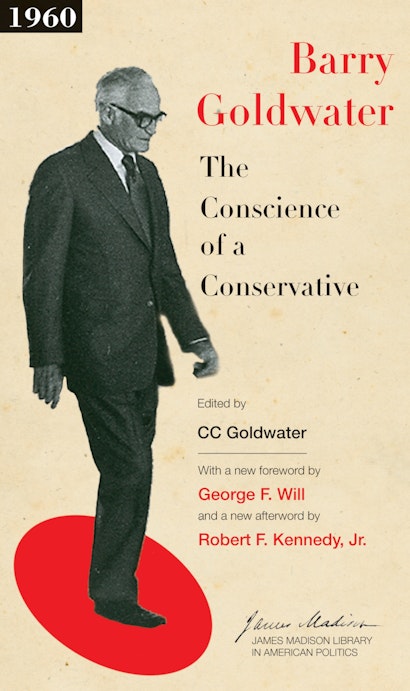 In 1960, Barry Goldwater set forth his brief manifesto in The Conscience of a Conservative. Written at the height of the Cold War and in the wake of America’s greatest experiment with big government, the New Deal, Goldwater’s message was not only remarkable, but radical. He argued for the value and importance of conservative principles — freedom, foremost among them — in contemporary political life. Using the principles he espoused in this concise but powerful book, Goldwater fundamentally altered the political landscape of his day — and ours.

Barry M. Goldwater (1909-1998) was a five-term U.S. senator from Arizona whose 1964 campaign for president is credited with reviving American conservatism. His books include With No Apologies and a memoir, Goldwater. CC Goldwater is the granddaughter of Barry Goldwater and the producer of the HBO documentary Mr. Conservative: Goldwater on Goldwater

"The book lays out, clearly and succinctly, [Goldwater's] uncompromising views. Goldwater held freedom as the highest value in American society: freedom from law, freedom from government, freedom from anybody else's vision but your own. You can argue with him on the particulars, but there's something compelling about his quintessentially American notion of self-reliance."—David Ulin, Los Angeles Times

"Praise for the original edition: "Goldwater's conservatism is not isolationism, nor is it a cold-blooded commitment to the 'haves' as against the 'have-nots.' It is the creed of a fighter who has both a warm heart and a clear mind.""—John Chamberlain, Wall Street Journal

"Praise for the original edition: "There is more harsh fact and hard sense in this slight book than will emerge from all of the chatter of this year's session of Congress. . . . Sen. Goldwater is one of a handful of authentic conservatives. . . . [H]e has the clarity of courage and the courage of clarity.""—George Morgenstern, Chicago Tribune

"It is good that C.C. Goldwater brings us this new edition. It directs new attention to a political figure who, though fiery, was never mean-spirited or unfairly partisan."—Max J. Skidmore, European Legacy