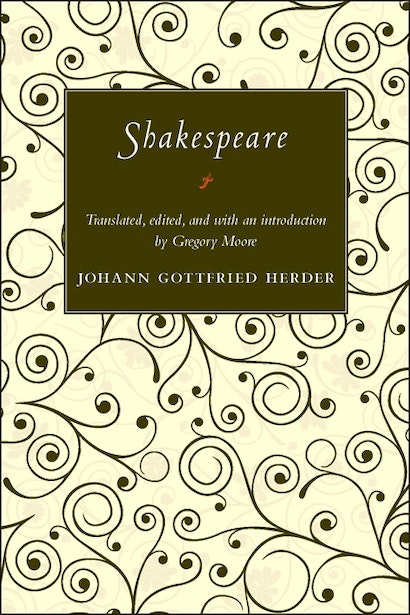 Without Johann Gottfried Herder (1744-1803), we simply would not understand Shakespeare in the way we do. In fact, much literature and art besides Shakespeare would neither look the same nor be the same without the influence of Herder’s “Shakespeare” (1773). One of the most important and original works in the history of literary criticism, this passionate essay pioneered a new, historicist approach to cultural artifacts by arguing that they should be judged not by their conformity to a set of conventions imported from another time and place, but by the effectiveness of their response to their own historical and cultural context. Rejecting the authority of a dominant and stifling French neoclassicism that judged eighteenth-century plays by the criteria of Aristotle, Herder’s “Shakespeare” signaled a break with the Enlightenment, the approach of Romanticism, and the arrival of a distinctly modern form of aesthetic appreciation.


With a vivid new translation and a fascinating introduction by Gregory Moore, this edition of Herder’s classic will speak to today’s readers with undiminished power and persuasiveness.

"Leaping over centuries, [Herder] cast Shakespeare as the heir of Sophocles (making himself the heir of Aristotle), and an inspiration for a new Northern European art. . . . It still reads as a charmingly enthusiastic defence of what would become familiar terms of Romanticism and reminds us that the call to do things with German literature and theatre was couched in terms of doing things with Shakespeare."—Ruth Morse, Times Literary Supplement

"This new edition of Herder's essay on Shakespeare, energetically translated by Gregory Moore . . . presents the piece full of life, with exclamations and big rhetorical questions abounding."—Daniel Hahn, Around the Globe

"Herder's essay is in its own right an intriguing read. Its re-examination of the development of tragedy should be of interest for any student of literature, as should its discussion of grandeur and catharsis in Aristotle. Moore's translation reads well, and is often impressively graceful. . . . [T]his is a pleasant edition of a historically important essay."—Lisa Marie Anderson, European Legacy

"In one fell swoop Herder heralded the approach of Romanticism and the arrival of a distinctly modern from of aesthetic appreciation. Shakespeare was truly a 'milestone in the development of liberary theory,' and this new volume makes this important work available to a broad audience in a compact and affordable package."—World Book Industry