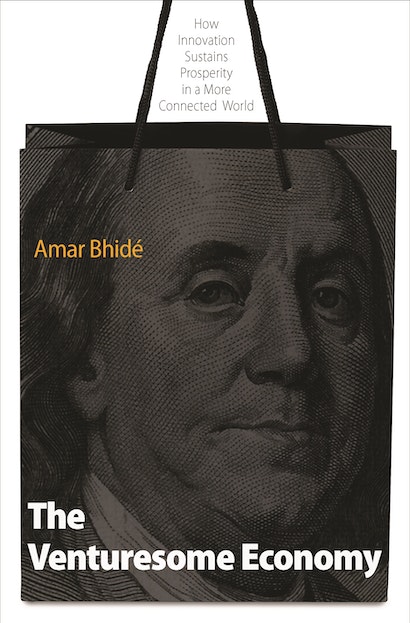 Many warn that the next stage of globalization — the offshoring of research and development to China and India — threatens the foundations of Western prosperity. But in The Venturesome Economy, acclaimed business and economics scholar Amar Bhidé shows how wrong the doomsayers are.


Using extensive field studies on venture-capital-backed businesses to examine how technology really advances in modern economies, Bhidé explains why know-how developed abroad enhances — not diminishes — prosperity at home, and why trying to maintain the U.S. lead by subsidizing more research or training more scientists will do more harm than good.


When breakthrough ideas have no borders, a nation’s capacity to exploit cutting-edge research regardless of where it originates is crucial: “venturesome consumption” — the willingness and ability of businesses and consumers to effectively use products and technologies derived from scientific research — is far more important than having a share of such research. In fact, a venturesome economy benefits from an increase in research produced abroad: the success of Apple’s iPod, for instance, owes much to technologies developed in Asia and Europe.


Many players — entrepreneurs, managers, financiers, salespersons, consumers, and not just a few brilliant scientists and engineers — have kept the United States at the forefront of the innovation game. As long as their venturesome spirit remains alive and well, advances abroad need not be feared. Read The Venturesome Economy and learn why — and see how we can keep it that way.

Amar Bhidé is the Thomas Schmidheiny Professor at the Fletcher School of Law and Diplomacy, Tufts University, editor of Capitalism and Society, member of the Council on Foreign Relations, and the author of The Origin and Evolution of New Businesses. A former McKinsey & Company consultant, Bhidé was educated at the Indian Institute of Technology and Harvard Business School, where he graduated as a Baker Scholar and later served as an associate professor. 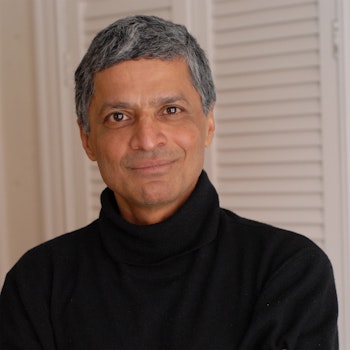 "Bhidé makes a detailed argument that contradicts the prevailing view of expert panels and authors who contend that the nation's prosperity is threatened by the technological rise of China and India, and that America's capacity for innovation is eroding. . . . Mr. Bhidé derides the conventional view in science and technology circles as 'techno-nationalism,' needlessly alarmist and based on a widely held misunderstanding of how technological innovation yields economic growth. In his view, many analysts put too much emphasis on the production of new technological ideas. Instead, he observes, the real economic payoff lies in innovations in how technologies are used."—Steve Lohr, New York Times

"Offers a perspective on American innovation and prosperity that is remarkably optimistic, given the temper of the times. Among his data-driven findings: American consumers have long shown an 'exceptional willingness' to buy, for instance, technology products before their utility is clear. Such 'venturesome consumers' help spur companies and entrepreneurs to take the risks that lead to innovation."—Rob Walker, New York Times

"The Venturesome Economy is a refreshing riposte to the doomsayers of recession and the bleak prognostications of the technonationalists. It is a compelling book and will have a wide audience; many will be interested in the numerous case studies, particularly of IT and biotech firms. The emphasis on relationships, connections and networks resonates well with modern literature on social capital and economic psychology."—Michelle Baddeley, Times Higher Education

"Bhidé points out that without our free-spending, possibly foolhardy yet certainly optimistic habits of consumption, Americans would not have moved the market to devise such culture-altering goods as personal computers, the iPod and, in an earlier and much tougher economic period, even mass-produced shoes."—Guy Trebay, New York Times

"In The Venturesome Economy, Bhidé provides a thorough discussion of the relationship between venture-backed business and globalization. Asserting the global influence of the United States, he explores the complex synthesis of innovation in an increasingly open international market. He also emphasizes the importance of embracing the ever-changing market and not fearing the false alarms and paranoia that strike an unpredictable economy."—Ming-Wei Wang, Nature

"Arguments for protectionism are based on fears that are wholly at odds with the evidence. The experience of recent years does not support the idea that millions of jobs will be outsourced to cheap foreign locations. . . . [Amar Bhidé argues] it is in the application of innovations to meet the needs of consumers that most economic value is created, so what matters is not so much where the innovation happens but where the 'venturesome consumers' are to be found. America's consumers show no signs of becoming less venturesome, and its government remains committed to the idea that the customer is king."—Matthew Bishop, The Economist

"Meticulously researched, clearly written and based on interviews with chief executive officers, the book offers a ground-breaking and counter-intuitive view of innovation and globalization."—Diana Furchtgott-Roth, New York Post

"Innovation everywhere is a boon to America. That's the argument from [Bhidé] who sees hidden value in America's unique ability to integrate and consume big new ideas, no matter where they're spawned."—Kirk Shinkle, U.S. News & World Report

"A rigorously researched and original analysis that challenges much received wisdom about the process of innovation, particularly in the US. . . . In his analysis of innovation, Bhidé distinguishes between cutting-edge scientific discoveries and ideas—what he calls 'high-level' know-how—and the kind of know-how needed to turn these ideas into innovative products and services to meet the needs of specific markets ('mid- and ground-level innovation'). He says not enough attention has been paid to this mid- and ground-level activity, in particular to the commercial and organisational effort needed to turn scientific breakthroughs into useful products, or to how well America does it."—Fergal Byrne, Financial Times

"A counterintuitive view of technology and globalisation that will delight those who believe that American innovation is insulated from economic ups and downs."—The Economist

"Bhidé's book is a welcome addition to the debate over how we sustain economic prosperity in a global, interconnected world."—R.B. Emmett, Choice

"[Bhidé] provides a provocative, counterintuitive case as to why the U.S. should support the training of foreign workers and research activities by foreign companies. Why? American companies can benefit, he says—pointing out, for example, that many of the acclaimed features on the iPod were actually developed abroad."—Business Week

"Annihilatingly good since it is so much at odds with the current, brows-knitted, anxious attitude toward the economic future. . . . Bhide is the undiscovered Malcolm Gladwell."—Amity Shlaes, Politico

"Bhidé busts some common misconceptions of innovation: Fewer PhDs do not necessarily mean less innovation. Subsequent applications, rather than an initial invention, spur prosperity and radical social change. Increased proportions of college graduates in a society may not necessarily herald economic benefits. And enthusiastic immigrants—not just high-level researchers—can increase employment opportunities and wages for domestic science and engineering workers. . . . The message threaded throughout this book—anyone can innovate—is inspiring and needed during a time of economic downturn."—Susan Froetschel, YaleGlobal Online

"[Bhidé's] core message is that you need innovative consumers. This, rather than the cutting-edge stuff in the university labs or the research departments of the multinationals, is what gives America its edge."—Hamish McRae, The Independent

"With a felicitous writing style, Bhidé addresses the antiforeign bias . . . and explains why innovation can sustain prosperity in the U.S., regardless of whether it emanates from within our borders or from Europe, Asia, or anywhere else. Read the chapter on 'Alarmist Arguments', in which he politely, but devastatingly, refutes the 'techno-nationalists'—many of them distinguished economists—who'd have us believe American prosperity depends on maintaining a lead 'on all fronts' in technical research."—Gene Epstein, Barron's Magazine

"Is the world really flat? That's the question posed by Amar Bhidé in his new book, The Venturesome Economy. Disputing Thomas Friedman, author of The World is Flat, Bhidé concludes that: (1) it isn't, and (2) arguments by Friedman and others—whom he labels as 'technonationalists'—fail to recognize how innovation that matters really occurs and aren't always helpful to long-term global or even U.S. development. . . . Bhidé concludes that the edge in economic development from the 'innovation game' comes from the kind of entrepreneurial behavior that adapts and combines high-level ideas and know-how, adjusts them to the needs of particular markets, and actually sells them to willing buyers."—James Heskett, Working Knowledge

"This is a fine book, a book for thinking with, providing rich detail and a carefully constructed argument about a big idea."—Jock Given, Prometheus

"If I were asked to recommend to the next president just one book on the trajectory of the U.S. economy in the next several years, it would unhesitatingly be Amar Bhidé's The Venturesome Economy. The book is an utterly original interpretation of the nature of the complex process of innovation. Among other things, it makes a mockery of the simplistic, alarmist writings that have become so popular in these troublesome economic times. As a student myself of the lovely, kinky history of real innovation, I almost found myself audibly cheering as I raced through this seminal text."—Thomas J. Peters, coauthor of In Search of Excellence: Lessons from America's Best-Run Companies

"Amar Bhidé provides a fresh and reassuring perspective on America's technological position in an increasingly global economy. Anyone interested in our economic future and especially our technology policies should read this book."—Lawrence Summers, Harvard University

"The strides made by China and India, notably their unexpected technological advances, have made America anxious, prompting calls to double federal spending on basic research. In The Venturesome Economy, Amar Bhidé draws on his unmatched knowledge of the mechanisms of innovation to show the benefits to us of Asia's advances and the errors in the techno-fetishism that grips Washington officialdom. This book deepens radically our understanding of how the global economy functions."—Edmund Phelps, 2006 Nobel Laureate in Economics

"In The Venturesome Economy, Amar Bhidé takes on the increasingly noisy chorus of critics worried about the effects of globalization on the national economy. He demonstrates that the application and commercialization of technology is far more important than whether the underlying science originated at home or abroad. The winners will be those countries and businesses that have the insight and energy to apply innovations effectively. This is an optimistic and important message."—Donald J. Gogel, president and CEO of Clayton, Dubilier & Rice

"A book full of solid if unconventional deductions, all based on extensive observations. Amar Bhidé is an author who knows whereof he speaks and to whom one should listen."—William J. Baumol, author of The Free-Market Innovation Machine