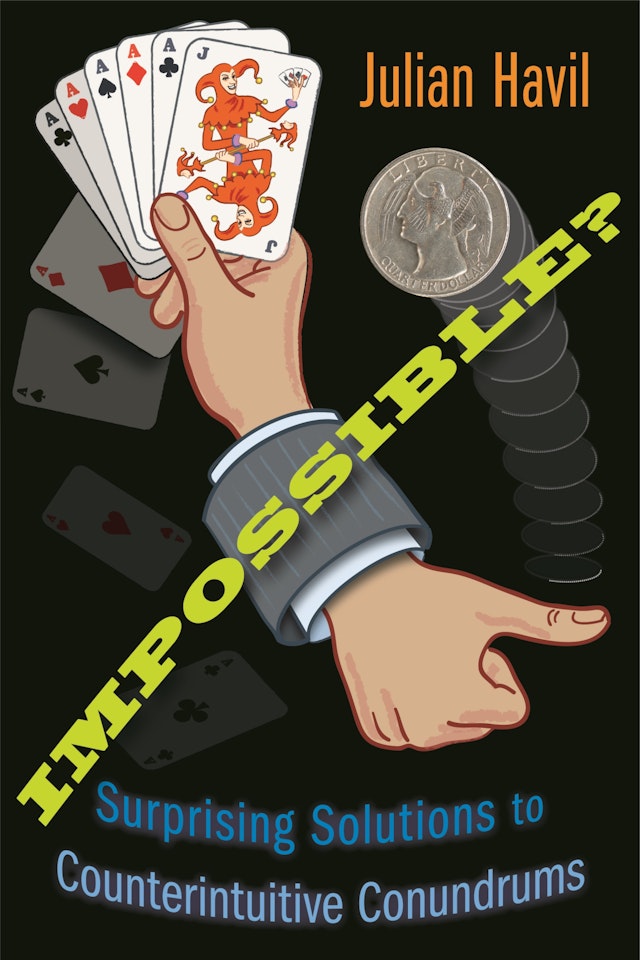 In Nonplussed!, popular-math writer Julian Havil delighted readers with a mind-boggling array of implausible yet true mathematical paradoxes. Now Havil is back with Impossible?, another marvelous medley of the utterly confusing, profound, and unbelievable—and all of it mathematically irrefutable.

Whenever Forty-second Street in New York is temporarily closed, traffic doesn’t gridlock but flows more smoothly—why is that? Or consider that cities that build new roads can experience dramatic increases in traffic congestion—how is this possible? What does the game show Let’s Make A Deal reveal about the unexpected hazards of decision-making? What can the game of cricket teach us about the surprising behavior of the law of averages? These are some of the counterintuitive mathematical occurrences that readers encounter in Impossible?

Havil ventures further than ever into territory where intuition can lead one astray. He gathers entertaining problems from probability and statistics along with an eclectic variety of conundrums and puzzlers from other areas of mathematics, including classics of abstract math like the Banach-Tarski paradox. These problems range in difficulty from easy to highly challenging, yet they can be tackled by anyone with a background in calculus. And the fascinating history and personalities associated with many of the problems are included with their mathematical proofs. Impossible? will delight anyone who wants to have their reason thoroughly confounded in the most astonishing and unpredictable ways.

Julian Havil is a retired former master at Winchester College, England, where he taught mathematics for thirty-three years. In addition to Nonplussed!, he is the author of Gamma: Exploring Euler's Constant (both Princeton).

"Havil once again explores a variety of mathematical results and problems that at first appear to be self-contradictory, or stated in such a way that no solution could exist. In each case, he then either sketches a proof of why the result is not contradictory, or explains the solution to the seemingly unsolvable problem . . . . Like a magician revealing secrets, Havil maintains this sense through most chapters, dropping the punch line at just the right moment."—J.T. Noonan, Choice

"This sequel to the author's book Nonplussed! supplies another set of brain-stretching problems and ideas. Its subtitle is 'Surprising Solutions to Counterintuitive Conundrums'; the surprise often consisting of the fact that it is possible to obtain a solution at all! . . . This is another excellent book by Havil, following in the Martin Gardner tradition."—Alan Stevens, Mathematics Today

"Julian Havil has quietly joined the ranks of the very best writers of popular mathematics. His two volume set Impossible? and Nonplussed! Mathematical Proof of Implausible Ideas not only belong in every library, but in the hands of every young person interested in mathematics and especially in the hands of their teachers."—John J. Watkins, Mathematical Intelligencer

"Impossible? is an immensely thought-provoking book. Even if you skim or skip the more complex abstract math, you may have a hard time letting these puzzles go, so strongly do they flout common sense. You'll just have to do your best to put them our of your mind when you need to get some sleep, but if the situation ever arises, be sure to take Monty up on his offer."—Ray Bert, Civil Engineering

"I would highly recommend this book as a reference for the mathematician who likes recreational mathematics, or as a good read for the recreational enthusiast with a penchant for more rigor."—Blair Madore, MAA Reviews

"Julian Havil's Impossible? is a superb discussion of problems easily understood by a high schooler, yet with solutions so counterintuitive as to seem impossible. Topics include the notorious Monty Hall three-door problem, the Gamow-Stern elevator paradoxes, the Kruskal count card trick, Cantor's 'paradise' of alephs, and the mind-blowing Banach-Tarski paradox, all analyzed in depth by a master who does not hold back equations that provide elegant proofs. There are surprises on almost every page."—Martin Gardner

"This book is a fascinating and thoroughly enjoyable read. Havil offers an engaging collection of counterintuitive results and seemingly impossible problems. Some of the material is truly astonishing, and the author conveys his sense of surprise very effectively. Each problem ultimately yields to careful and well-presented analysis. The history of many of the results is discussed, and further references are provided."—Nick Hobson, creator of the award-winning Web site Nick's Mathematical Puzzles

"I thought it impossible for Julian Havil to exceed Nonplussed!, his previous collection of perplexing math puzzlers. And yet he has done just that with the sequel Impossible?, an accomplishment that has left me nonplussed."—Paul J. Nahin, author of An Imaginary Tale