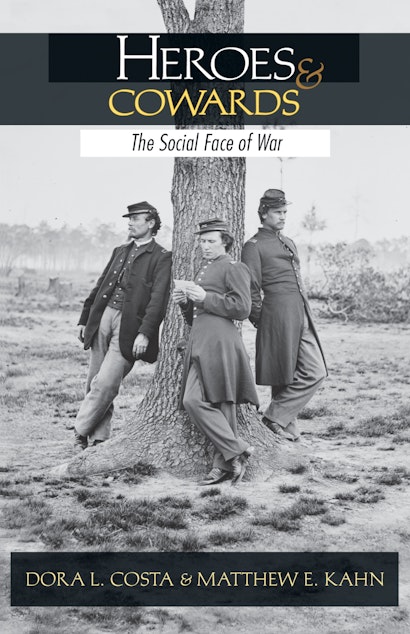 When are people willing to sacrifice for the common good? What are the benefits of friendship? How do communities deal with betrayal? And what are the costs and benefits of being in a diverse community? Using the life histories of more than forty thousand Civil War soldiers, Dora Costa and Matthew Kahn answer these questions and uncover the vivid stories, social influences, and crucial networks that influenced soldiers’ lives both during and after the war.


Drawing information from government documents, soldiers’ journals, and one of the most extensive research projects about Union Army soldiers ever undertaken, Heroes and Cowards demonstrates the role that social capital plays in people’s decisions. The makeup of various companies — whether soldiers were of the same ethnicity, age, and occupation — influenced whether soldiers remained loyal or whether they deserted. Costa and Kahn discuss how the soldiers benefited from friendships, what social factors allowed some to survive the POW camps while others died, and how punishments meted out for breaking codes of conduct affected men after the war. The book also examines the experience of African-American soldiers and makes important observations about how their comrades shaped their lives.

Heroes and Cowards highlights the inherent tensions between the costs and benefits of community diversity, shedding light on how groups and societies behave and providing valuable lessons for the present day.

Dora L. Costa is the author of The Evolution of Retirement: An American Economic History, 1880-1990. She teaches at the University of California, Los Angeles. Matthew E. Kahn is the author of Green Cities: Urban Growth and the Environment. He also teaches at UCLA. Costa and Kahn are research associates at the National Bureau of Economic Research.

"Heroes and Cowards is interesting to read. . . . It is a work of military sociology written with one eye on the debate about the social costs of diversity. . . . Ms. Costa and Mr. Kahn emphasize the advantages of trust and mutual sacrifice that come from social similarity. They understand full well the contemporary implications of their historical study. When we contemplate helping others, whether through volunteer organizations or welfare—state transfers, we are less likely to provide for—and more likely to abandon—those who are unlike ourselves."—David Courtwright, Wall Street Journal

"This is brilliant social science, dealing with key themes by means of powerful methods used on a superb database. The authors are economic historians skilled in quantitative analysis who investigate social factors that caused Union soldiers to act as heroes or cowards during the Civil War."—Choice

"In their new book Heroes and Cowards, economists Dora Costa and Matthew Kahn use the Civil War as their laboratory to study what men will do in the name of friendship. They find that men serving in companies with tight social connections—like shared birthplace and occupation—were more likely to stand and fight than those in less tight-knit companies, where desertion rates were up to four times higher."—Ray Fisman, Slate.com

"Heroes and Cowards highlights the inherent tensions between the costs and benefits of community diversity, shedding light on how groups and societies behave and providing valuable lessons for the present day."—Spartacus Educational

"Academics may want to include this volume in their undergraduate and graduate Civil War history reading list . . . and the records and collection methods included in the appendix, as well as the chapter endnotes and extensive bibliography, document the research findings of the authors. Non-academics likewise will find a copious volume of unique anecdotal entries especially enlightening."—Arthur B. Fox, Blue & Gray Magazine

"With a striking amount of data, Heroes and Cowards is one of the most impressive books this reviewer has seen in years. . . . Carefully written, with sharp analysis and new avenues for research, Heroes and Cowards is a fresh and inspiring example of social history at its best."—Jerry Thompson, Journal of American History

"This is simply the best study of the motivation to fight, demonstrating the benefits of long-term and deep engagement with a case and the advantages that accrue to the successful and creative combination of quantitative and historical methods."—Stathis N. Kalyvas, Peace Research

"Costa and Kahn's approach . . . should stimulate further research on the social history of the Civil War."—Jeffrey W. Mcclurken, Journal of Southern History

"This impressive study, based on a random sample of forty thousand Civil War soldiers both black and white, reaches important conclusions about their motivation and behavior. Its most significant findings emphasize the role of close social networks within companies and regiments in promoting combat performance, preventing desertion, and increasing survival rates in POW camps. Readable and accessible to nonspecialists, this book should find a wide audience among those interested in the Civil War as well as group behavior more generally."—James McPherson, author of the Pulitzer Prize-winning Battle Cry of Freedom

"This remarkable book is destined to become a classic in social science. It addresses issues of supreme importance and timeliness—loyalty, betrayal, heroism, cowardice, survival, the challenges of diversity, and the benefits of social bonds. It rests on rigorous statistical analysis of an extraordinary historical archive, and yet it is so readable as to be unputdownable. It deals with a single epochal event in one nation's history—the U.S. Civil War—and yet its lessons are highly relevant in many other eras and societies, including our own."—Robert Putnam, author of Bowling Alone: The Collapse and Revival of American Community

"Dora Costa and Matthew Kahn built a social science laboratory from the enlistment and pension records of men who fought in the Union Army during the American Civil War. In that remarkable laboratory they have discovered how friendship, community ties, and social status alter our choices. Read Heroes and Cowards for its reliable science; savor it for how it honors the harrowing circumstances that made the science possible."—Michael Hout, coauthor of Century of Difference: How America Changed in the Last One Hundred Years

"Dora Costa and Matthew Kahn have written a superb book on bravery in the Civil War. Their work informs us not only about courage under fire, but about the many settings where people are called upon to act for a common good. This is a pioneering piece of social science."—Edward L. Glaeser, Harvard University

"In the remarkable Heroes and Cowards, Costa and Kahn demonstrate how social bonds helped determine which soldiers would fight to the death and which would flee for their lives, which soldiers would survive the deadly prison camps and which would succumb. The authors utilize the tools of social science to serve, rather than obscure, the riveting accounts by Union soldiers—the heroes, the cowards, and those in between."—Claude S. Fischer, University of California, Berkeley

"With its excellent blending of qualitative and quantitative data, this is a significant contribution to Civil War history and, more generally, to military history. It will be of great interest to economists, historians and general readers, especially the large number still fascinated by the Civil War."—Stanley L. Engerman, coauthor of Time on the Cross

"Dora Costa and Matthew Kahn are two accomplished scholars whose work offers substantially new insights, on why men desert and how this affects them; on the experience of black soldiers during and after the war; and on the migration patterns of war veterans. The research behind this book is based on data that has not previously been used by scholars, and their use of that data is imaginative and revealing. Heroes and Cowards is a significant contribution to our knowledge of how Civil War veterans coped with the stresses of war and their lives after 1865."—Roger Ransom, author of The Confederate States of America: What Might Have Been

"Heroes and Cowards is a remarkable and impressive piece of economic history, a unique book that will interest a large readership."—Louis P. Cain, Loyola University Chicago