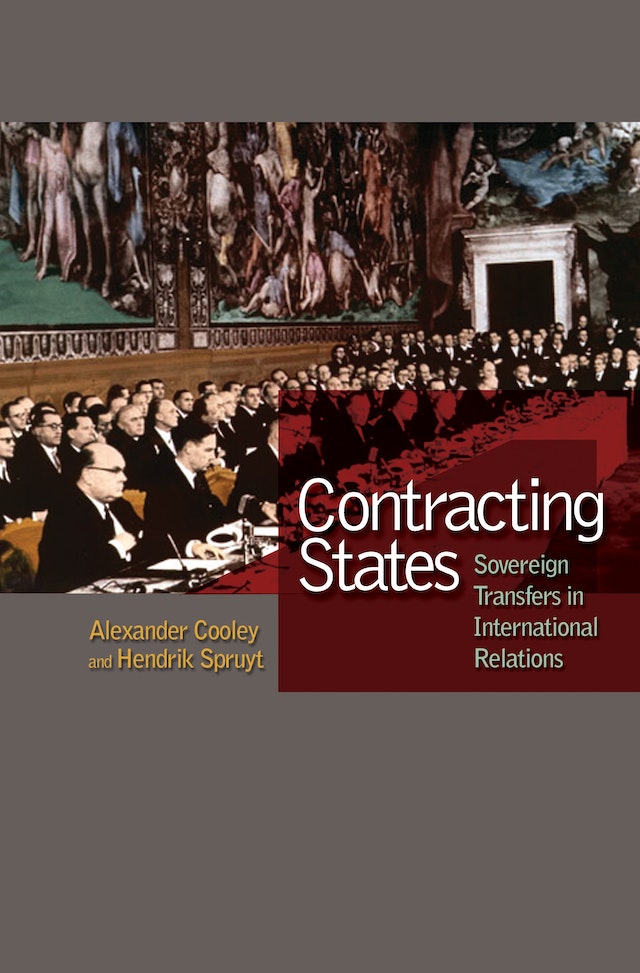 Increasingly today nation-states are entering into agreements that involve the sharing or surrendering of parts of their sovereign powers and often leave the cession of authority incomplete or vague. But until now, we have known surprisingly little about how international actors design and implement these mixed-sovereignty arrangements. Contracting States uses the concept of “incomplete contracts” — agreements that are intentionally ambiguous and subject to future renegotiation — to explain how states divide and transfer their sovereign territory and functions, and demonstrate why some of these arrangements offer stable and lasting solutions while others ultimately collapse.


Building on important advances in economics and law, Alexander Cooley and Hendrik Spruyt develop a highly original, interdisciplinary approach and apply it to a broad range of cases involving international sovereign political integration and disintegration. The authors reveal the importance of incomplete contracting in the decolonization of territories once held by Europe and the Soviet Union; U.S. overseas military basing agreements with host countries; and in regional economic-integration agreements such as the European Union. Cooley and Spruyt examine contemporary problems such as the Arab-Israeli dispute over water resources, and show why the international community inadequately prepared for Kosovo’s independence.

Contracting States provides guidance to international policymakers about how states with equally legitimate claims on the same territory or asset can create flexible, durable solutions and avoid violent conflict.

Alexander Cooley is associate professor of political science at Barnard College, Columbia University. His books include Base Politics and Logics of Hierarchy. Hendrik Spruyt is the Norman Dwight Harris Professor of International Relations at Northwestern University. His books include Ending Empire and The Sovereign State and Its Competitors (Princeton).

"Contrary to the common image of state sovereignty as unitary and absolute, Cooley and Spruyt examine the many situations in which sovereignty rights are shared or transferred: decolonization, foreign military bases, water rights, ethnic federalism, and more. Their use of the concept of incomplete contracting to shed light on a huge range of historical and contemporary bargaining processes is as timely as today's news stories about Russia's gas pipeline price gouging."—Jack Snyder, Columbia University

"Contracting States is an extraordinary undertaking that challenges us to see the foundations of successful international cooperation in a new light. This is likely to be a seminal work that defines the terms of the debate about sovereignty and governance for years to come."—Philip G. Roeder, University of California, San Diego

"Contracting States adds a great deal to our understanding of mixed forms of sovereignty. It not only poses an interesting puzzle but provides a sophisticated theoretical framework and leaves the reader with useful policy prescriptions for hybrid governance structures. This book makes a significant contribution to the literature. I learned a great deal from Contracting States."—Katja Weber, Georgia Institute of Technology