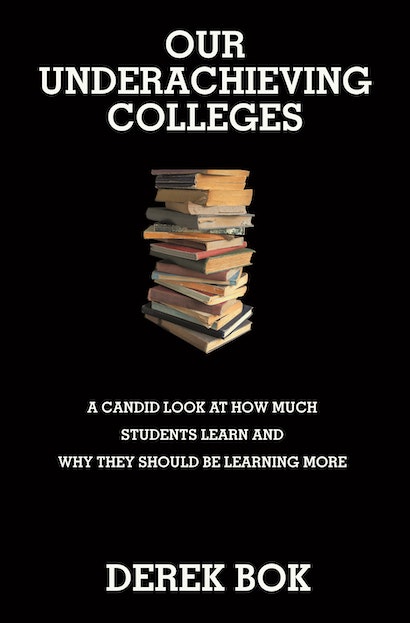 Drawing on a large body of empirical evidence, former Harvard President Derek Bok examines how much progress college students actually make toward widely accepted goals of undergraduate education. His conclusions are sobering. Although most students make gains in many important respects, they improve much less than they should in such important areas as writing, critical thinking, quantitative skills, and moral reasoning. Large majorities of college seniors do not feel that they have made substantial progress in speaking a foreign language, acquiring cultural and aesthetic interests, or learning what they need to know to become active and informed citizens. Overall, despite their vastly increased resources, more powerful technology, and hundreds of new courses, colleges cannot be confident that students are learning more than they did fifty years ago.


Looking further, Bok finds that many important college courses are left to the least experienced teachers and that most professors continue to teach in ways that have proven to be less effective than other available methods. In reviewing their educational programs, however, faculties typically ignore this evidence. Instead, they spend most of their time discussing what courses to require, although the lasting impact of college will almost certainly depend much more on how the courses are taught.


In his final chapter, Bok describes the changes that faculties and academic leaders can make to help students accomplish more. Without ignoring the contributions that America’s colleges have made, Bok delivers a powerful critique — one that educators will ignore at their peril.

Derek Bok is President Emeritus and Research Professor at Harvard University and the author of many major books on higher education, including (with William Bowen) The Shape of the River: Long-Term Consequences of Considering Race in College and University Admissions and Universities in the Marketplace: The Commercialization of Higher Education (both Princeton).

"In the Bok view, American colleges and universities are victims of their own success: they answer to so many constituencies and are expected to serve so many ends that no one can agree on even a few common goals, and in the meantime they have grown complacent."—Charles McGrath, The New York Times

"Derek Bok paints a picture of colleges that, if not dysfunctional, are operating far below capacity. He questions the coherence and purpose of departmental majors, describes programs of study abroad as little more than recreational excursions, criticizes lecturers for their indifference to whether students learn anything, and, in general, hold faculty accountable for ignoring research about which teaching methods are most effective."—Andrew Delbanco, New York Review of Books

"Derek Bok makes a unique contribution by skillfully weaving his critique of campus and curriculum with an extensive review of the literature on student in a number of key areas, including writing instruction, critical thinking instruction, civic education, and diversity education. Rather than identify a narrowly defined culprit in the supposed decline of higher education, such as political correctness or neglect of the literary canon, Bok writes persuasively about the multiple aims of higher education and retains focus throughout on the question of how attention to each of these aims contributes to measurable increases in student learning. . . . This thoughtful critique of higher education will be accessible to a wide audience."—Publishers Weekly

"In Our Underachieving Colleges, Derek Bok argues forcefully that those of us within the academy can do a much better job of educating our undergraduates, widening their vistas, and preparing them to succeed in life."—Charles M. Vest, Boston Globe

"Bok in this book criticizes the state of undergraduate education. . . . His research suggests that common problems in education extend beyond K-12."—Education Week

"Derek Bok . . . points out in his recent book . . . that civic responsibility must be learned, that it is neither natural nor effortless."—Michael M. Spear, Editor & Publisher

"It's hard to think of anything more central to a university than teaching. . . . The cause of improving teaching quality—and of perhaps imparting practical knowledge to students—now has a well-placed champion: Derek Bok. . . . As the highest profile academic in the world, he'll have a chance to change the way academics think about the interaction between the professor and the student. But as Bok may know better than anyone else, he has his work cut out for him."—James Beale, Washington Monthly

"Derek Bok's most recent book, Our Underachieving Colleges, is worth scrutinizing. . . . Bok is . . . on solid ground in pointing out that our colleges underachieve in preparing students for citizenship."—George Leef, The American Enterprise Online

"In Our Underachieving Colleges, [Derek] Bok acts as both diagnostician and healer, wielding social-science statistics and professional studies to trace the etiology of today's illnesses and to recommend palliative treatments for what he has discovered."—Donald Kagan, Commentary

"Derek Bok makes a unique contribution by skillfully weaving his critique of campus and curriculum with an extensive review of the literature on student learning in a number of key areas. . . . Rather than identify a narrowly defined culprit in the supposed decline of higher education, Bok writes persuasively about the multiple aims of higher education and retains focus throughout on the question of how attention to each of these aims contributes to measurable increases in student learning. . . . This thoughtful critique of higher education will be accessible to a wide audience."—Scott Walter, Library Journal

"Bok focuses not on curriculum change but on pedagogy. He asks why college teachers have not taken more advantage of the extensive research that has been done on the conditions that allow students to learn most effectively."—Ken Gewertz, Harvard University Gazette

"What distinguishes Our Underachieving Colleges from other books in the genre is the author's focus on what research has to say about what students are and are not learning, along with his insistence that institutions should put their money where their mouths are and invest in the teachers, teaching, and educational experiences that are likely to help them achieve their own chosen goals."—Mary Taylor Huber, Change

"In his book, Our Underachieving Colleges, Derek Bok, past-president of Harvard University, challenges postsecondary institutions to live up to their educational mandate. . . . [H]is stature in American higher education adds credibility and weight to his challenge. Also, the book is well researched and well argued. As such, it has the potential to motivate change. . . . If you are a senior administrator or board member, please read this book. If you are not, consider making a gift of it to someone else."—Gary Poole, University Affairs

"This book is a clarion call. Attention should be paid."—Peter Lamal, Journal of Higher Education

"Derek Bok's Our Underachieving Colleges is readable, balanced, often wry, and wise. This book should be required reading for every curriculum committee and academic dean. As someone who has lived his whole life in the academy, Bok knows how to bring institutional practice in line with research on how students learn best. In a period when many other countries are working hard at improving undergraduate education, this book should serve as a spur to overcome the complacency that attends most discussions of American undergraduate education, especially in our leading institutions."—Mary Patterson McPherson, President Emeritus of Bryn Mawr College and Vice President of the Andrew W. Mellon Foundation

"A bookcase-worth of jeremiads, long on invective but short on evidence, decries the supposedly sorry state of undergraduate instruction. The Closing of the American Mind, Illiberal Education, The University in Ruins: the titles give the game away. In Our Underachieving Colleges, Derek Bok argues persuasively that, far from pinpointing a real crisis, these accounts are exercises in nostalgia, laments for an Edenic era that never existed. In jargon-free prose he makes accessible hitherto obscure studies on topics that range from students' satisfaction with their college experience to the efficacy of ethics courses. What's even more important, he draws on this research to advance useful and usable prescriptions for colleges that, while not doing badly, could do much better. For anyone with an open mind about the state of American higher education, Our Underachieving Colleges is indispensable reading."—David L. Kirp, Professor of Public Policy, University of California at Berkeley, author of Shakespeare, Einstein, and the Bottom Line: The Marketing of Higher Education

"Radical and conservative critics of undergraduate education have met their match in Derek Bok's new book. After carefully spelling out what the core purposes of undergraduate education should be—learning to communicate, learning to think critically, building good character, preparing for citizenship, living with diversity, preparing for a global society, developing breadth of interests, and preparing for a career—Our Underachieving Colleges explains why undergraduate education in America is not as good as it could be and offers suggestions for improvement. Trustees, academic administrators, and faculty across the nation should all read Our Underachieving Colleges because Bok holds them all responsible for the deficiencies of our undergraduate programs and assigns each an important role in the quest for improvement. Perhaps his most important message is that undergraduate education is more than what goes on in the classroom; every aspect of life and decision making in academia is involved."—Ronald G. Ehrenberg, Irving M. Ives Professor of Industrial and Labor Relations and Economics and Director of the Cornell Higher Education Research Institute (CHERI)