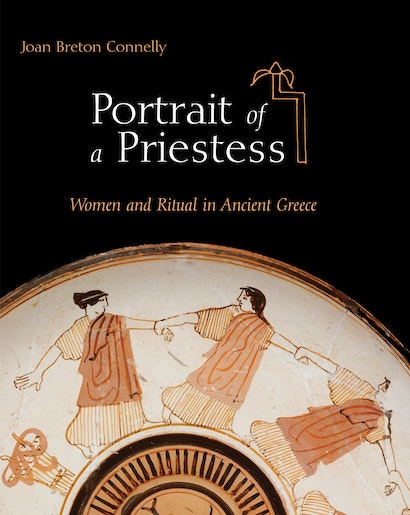 In this sumptuously illustrated book, Joan Breton Connelly gives us the first comprehensive cultural history of priestesses in the ancient Greek world. Connelly presents the fullest and most vivid picture yet of how priestesses lived and worked, from the most famous and sacred of them — the Delphic Oracle and the priestess of Athena Polias — to basket bearers and handmaidens. Along the way, she challenges long-held beliefs to show that priestesses played far more significant public roles in ancient Greece than previously acknowledged.

Connelly builds this history through a pioneering examination of archaeological evidence in the broader context of literary sources, inscriptions, sculpture, and vase painting. Ranging from southern Italy to Asia Minor, and from the late Bronze Age to the fifth century A.D., she brings the priestesses to life — their social origins, how they progressed through many sacred roles on the path to priesthood, and even how they dressed. She sheds light on the rituals they performed, the political power they wielded, their systems of patronage and compensation, and how they were honored, including in death. Connelly shows that understanding the complexity of priestesses’ lives requires us to look past the simple lines we draw today between public and private, sacred and secular.

The remarkable picture that emerges reveals that women in religious office were not as secluded and marginalized as we have thought — that religious office was one arena in ancient Greece where women enjoyed privileges and authority comparable to that of men. Connelly concludes by examining women’s roles in early Christianity, taking on the larger issue of the exclusion of women from the Christian priesthood. This paperback edition includes additional maps and a glossary for student use.

Joan Breton Connelly is Professor of Classics and Art History at New York University. She is the author of Votive Sculpture of Hellenistic Cyprus. A field archaeologist, she has worked in Greece, Kuwait, and Cyprus, where she is Director of the NYU Yeronisos Island Excavations. She is a recipient of a MacArthur Fellowship in recognition of her work on Greek art, myth, and religion, including her reinterpretation of the Parthenon frieze.

"In this sphere of polis life the priestess clearly played a leading and fundamental role. This makes it all the more astonishing that Joan Breton Connely's Portrait of a Priestess is, as she rightly claims, the first full-length work to take the Greek priestess specifically as its subject. . . . Connelly has run down inscriptions—honorific, funerary, financial, or cult-related—all over the Mediterranean. She has studied a plethora of statues and vase paintings in collections from Samos to St. Petersburg, from Messene to Munich, from Thebes to Toledo. Her indexes of monuments and inscriptions testify to the prodigious amount of work that has gone into this volume. . . . Portrait of a Priestess is a remarkable triumph against heavy odds."—Peter Green, New York Review of Books

"Eye opening...well-documented, meticulously assembled....Greek religion is a vast and complex subject, and Portrait of a Priestess, by concentrating on one of its most concretely human aspects, offers an engrossing point of entry. . . . Connelly's style is clear, often elegant and occasionally stirring."—Steve Coates, New York Times Book Review

"Joan Breton Connelly's Portrait of a Priestess: Women and Ritual in Ancient Greece is the biggest, fullest and most up-to-date study of these important women from the time of Homer through to the early years of Christianity. Beautifully illustrated and substantially documented, it is also highly argumentative and . . . ambitious."—James Davidson, Times Literary Supplement

"Until Joan Breton Connelly's wonderful volume, Portrait of a Priestess, was published the prominent role of Greek priestesses in ancient Greek society was ignored, or even denied, by most (male) commentators. . . . Her compelling book challenges our assumptions about the role of priestesses, and more generally the role of women, in a far-off world that retains the fascination of countless readers."—The Book Depository

"The quantity of illustrations is revealing: if women were excluded from public life, why were their images everywhere? Connelly argues that the authority entrusted to women as priestesses made them far from subordinate in the Greek state and that they were in fact often prominent and indispensable executives in the civic sphere. This is a reinterpretation of antiquity that works."—Nigel Spivey, Financial Times

"By examining the lives and work of 150 priestesses—from Troy's Kassandra, whose beauty distracted Ajax, to the historical Berenike who was celebrated for her civic and philanthropic contributions to the city of Syros—Connelly reinstates these women to their rightful place in ancient history."—Eti Bonn-Muller, Archaeology

"Connelly's brave effort is a long time in the making and deserves to be taken seriously. For one thing, the book is substantial in length and assembles a rich body of documentation, much of it epigraphical and unfamiliar to many archaeologists and art historians. It is also lavishly produced."—Catherine M. Keesling, Bryn Mawr Classical Review

"A gorgeously illustrated (over 100 images) and wonderfully readable new book....The first comprehensive cultural history of priestesses in the ancient Greek world....Dr. Connelly presents a full and vivid picture of the priestesses, who ranged from southern Italy to Asia Minor from the late Bronze Age to the fifth century AD."—Vicki J Yiannias, Greek News

"Her conclusions should upset many of the assumptions commonly held about women in the time of Christ. . . . Apart from the clarity of its writing and the quality of its illustrations, this book is important because it helps the lay reader grasp what today's specialists are thinking. . . . Essential reading."—Owen Higgs, New Directions

"Joan Connelly's new book boldly challenges old assumptions about the subordination of Greek women. . . . To understand ancient Greek culture and the place of women in it, we must set aside our own distinctions between sacred and secular, public and private, power and incapacity. . . . The array of monuments, vase paintings, and inscriptions Connelly has collected is a welcome resource for scholars, and nonexperts will benefit from her clear style and careful placement of each object in historical context."—Joy Connolly, Women's Review of Books

"This book offers a rich mine of information about women's lives through their participation in religion and will be a valuable addition to school and university libraries."—Janet Watson, Journal of Classics Teaching

"Beautifully illustrated and presented, with exhaustive notes and bibliography, this is an excellent study into the role of women as priestesses from the highest to lowest ranking. [Connelly], from her vast experience in the fields of archaeology and fine art, demonstrates clearly how the role of women in religious office was more important than many believed."—Terry Cook, Greek-o-File

"This richly illustrated and beautifully produced exploration of an underdeveloped topic by seasoned archaeologist Connelly applies the full array of theoretical tools to produce a volume that portrays the lifelong role of real women, realized in public but mastered in the home, in sacred service to the ancient Greek polis....This accessible volume significantly contributes to the ongoing reshaping of scholars' and students' understanding of the social realities of ancient Greek women."—J.C. Hanges, Choice

"Portrait of a Priestess is an impressively long book. It is beautifully produced. . . . It is also affordable and easy to use, but the book anticipates a specialist, scholarly readership. . . . [T]he author does a superb job of juggling such a massive amount of data. It is very likely that her publication will become a standard study of women and religion, serving as both monograph and reference work."—Tyler Jo Smith, Museum Anthropology

"[A]lmost 20 years in the making, this is a remarkable book. It is easy to believe that al1 anyone has ever wanted to know about priestesses in the ancient Greek world is contained here. . . . Connelly's achievement is to put between two covers of an attractive book a storehouse of data."—Robin Osborne, Cambridge Archaeological Journal

"This is a striking hypothesis—one that brings scholarship on women's religious roles into line with current understandings of their domestic influence."—Susan Deacy, Journal of Hellenic Studies

"[T]his book is useful for its wide-ranging collection of evidence, good photographs, and some observations. It gives a good stimulus to recognize the public visibility of priestesses."—Eva Stehle, Journal of Religion

"Connelly has brought together a large body of evidence about priestesses and posed new questions about them that move forward the study of priesthoods in antiquity. Many questions still remain, and further analysis of the epigraphical evidence in particular is much needed. This beautifully illustrated book will be the starting point for future research on the subject."—Margaret M. Miles, Journal of the American Academy of Religion

"Connelly's landmark study is a must-read for any scholar of ancient religion, art, or gender studies."—Laurie A. Kilker, Religion Journal

"Princeton University Press must be thanked and complimented for offering such a significant and persuasive revisionist study, very generously illustrated, at so modest a price, making it affordable not just for university libraries and specialists, but for others who wish to gain 'state-of-the-question' understanding of female elites and leaders in the Greco-Roman world."—Victor Castellani, European Legacy

"Portrait of a Priestess is well-structured and lucidly written. The book maintains a healthy balance between overuse and total avoidance of Greek words and professional terms, and addresses not only a readership of specialists in Classical studies, but a much wider audience."—Yulia Ustinova, Scripta Classica Israelica

"Joan Connelly . . . has produced a fascinating book on the central role of priestesses in ancient Greek society. Her survey is fully documented and beautifully illustrated. One cannot but admire her enthusiasm for the subject and her deft handling of the evidence."—Colin Austin, University of Cambridge, coeditor of Aristophanes Thesmophoriazusae

"There was a great need for a book of this kind. Through direct observation of artifacts, the author offers many original ideas, and even manages to correct some long-held erroneous readings of ancient texts. Her emphasis on the important role played by some women in classical antiquity is a welcome corrective to the stereotype of the subordinate female in the Greek world. The remarkably wide-ranging material will be of great interest not only to archaeologists but also to scholars in various fields."—Brunilde S. Ridgway, Professor Emerita, Bryn Mawr College, author of Prayers in Stone: Greek Architectural Sculpture (c. 600-100 B.C.E.)

"This is the first full presentation in English or in any language of the female priest in the ancient Greek world. Connelly adduces evidence that women all over the Greek world had, as priestesses, positions of great public influence in their communities. I predict this study will have a wide readership by general classicists as well as those interested in ancient religion, ancient society, and women in ancient Greece, not to mention by art historians. This promises to be a landmark study."—Stephen V. Tracy, American School of Classical Studies at Athens, author of Athens and Macedon: Attic Letter-Cutters of 300 to 229 B.C.

"There has long been a need for a book devoted to the role of the priestess in ancient Greece. After reading Connelly, no one could fail to be persuaded that priestesses could play an important role in society or that they were given significant honors. This book will do much to improve and extend our understanding of the role of Greek women both in religion and in society."—Mary Lefkowitz, Wellesley College, author of Greek Gods, Human Lives: What We Can Learn from Myths