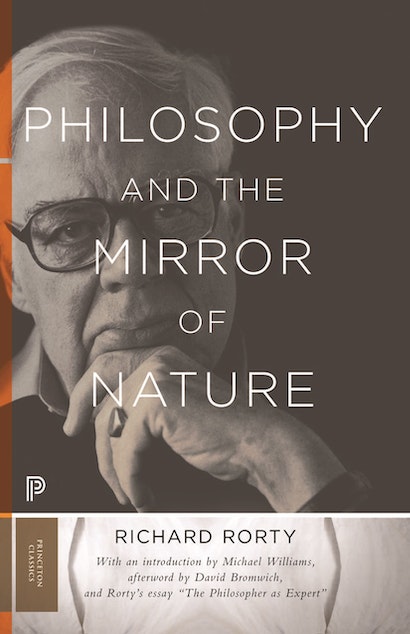 When it first appeared in 1979, Philosophy and the Mirror of Nature hit the philosophical world like a bombshell. In it, Richard Rorty argued that, beginning in the seventeenth century, philosophers developed an unhealthy obsession with the notion of representation: comparing the mind to a mirror that reflects reality. Rorty’s book is a powerful critique of this imagery and the tradition of thought that it spawned.


Today, the book remains a must-read and stands as a classic of twentieth-century philosophy. Its influence on the academy, both within philosophy and across a wide array of disciplines, continues unabated. This edition includes new essays by philosopher Michael Williams and literary scholar David Bromwich, as well as Rorty’s previously unpublished essay “The Philosopher as Expert.”

Richard Rorty (1931-2007) was a prolific philosopher and public intellectual who, throughout his illustrious career, taught at Princeton, the University of Virginia, and, until his death, Stanford University.

"This is an ambitious and important book. Ambitious because it attempts to place the main concerns and discussions of contemporary philosophy within a historical perspective; important because this is all too rarely attempted within our present philosophical culture, and almost never done this well."—Charles Taylor, Times Literary Supplement

"It is going to be a long time before a better book of its kind appears."—Alasdair MacIntyre, London Review of Books

"Philosophy and the Mirror of Nature brings to light the deep sense of crisis within the profession of academic philosophy. . . . Rorty's provocative and profound meditations impel philosophers to examine the problematic status of their discipline—only to discover that modern European philosophy has come to an end."—Cornel West, Union Seminary Quarterly Review