The paradox of racial inequality in Barack Obama's America 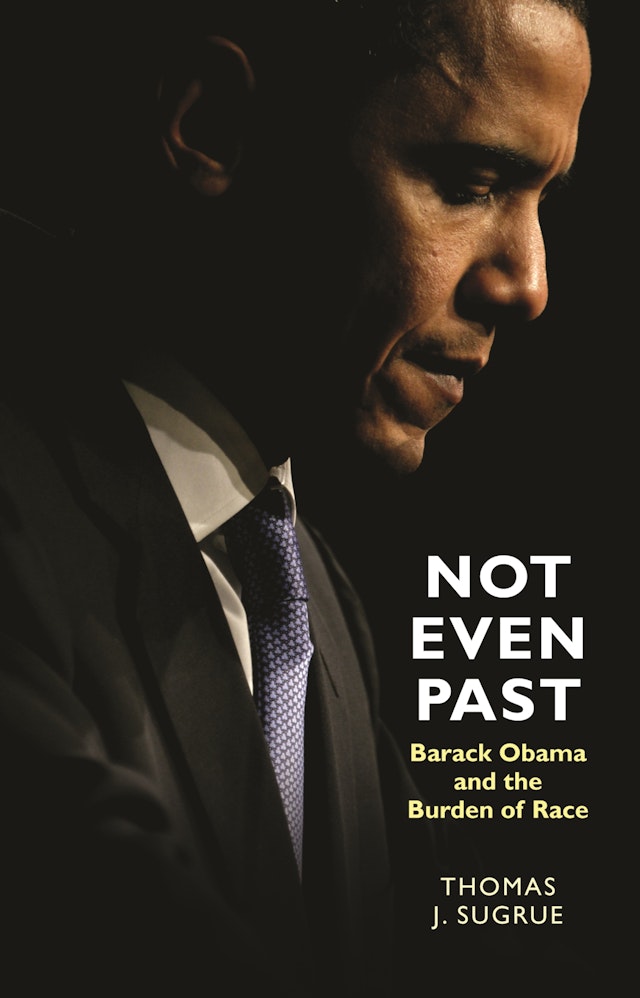 Barack Obama, in his acclaimed campaign speech discussing the troubling complexities of race in America today, quoted William Faulkner’s famous remark “The past isn’t dead and buried. In fact, it isn’t even past.” In Not Even Past, award-winning historian Thomas Sugrue examines the paradox of race in Obama’s America and how President Obama intends to deal with it.

Obama’s journey to the White House undoubtedly marks a watershed in the history of race in America. Yet even in what is being hailed as the post-civil rights era, racial divisions—particularly between blacks and whites—remain deeply entrenched in American life. Sugrue traces Obama’s evolving understanding of race and racial inequality throughout his career, from his early days as a community organizer in Chicago, to his time as an attorney and scholar, to his spectacular rise to power as a charismatic and savvy politician, to his dramatic presidential campaign. Sugrue looks at Obama’s place in the contested history of the civil rights struggle; his views about the root causes of black poverty in America; and the incredible challenges confronting his historic presidency.

Does Obama’s presidency signal the end of race in American life? In Not Even Past, a leading historian of civil rights, race, and urban America offers a revealing and unflinchingly honest assessment of the culture and politics of race in the age of Obama, and of our prospects for a postracial America.

Thomas J. Sugrue is the David Boies Professor of History and Professor of Sociology at the University of Pennsylvania. His books include Sweet Land of Liberty: The Forgotten Struggle for Civil Rights in the North and The Origins of the Urban Crisis: Race and Inequality in Postwar Detroit (Princeton).

"Distinguished civil rights historian and sociologist Sugrue (Sweet Land of Liberty) follows Barack Obama's intellectual journey and political education from his student years in the late 1970s through his first years as president, offering an insightful and fresh glimpse of Obama through three lenses—as intellectual, politician, and policy maker—and with three essays. While David Remnick's comprehensive The Bridge bears thematic similarities, Sugrue offers a pithy and readable survey of some of the same terrain—the path that 'rooted the rootless Hawaiian in the history of the Southern freedom struggle' and the formation of his politics that favored 'reconciliation over confrontation.' Sugrue addresses Obama's Chicago years and the evolution of his thinking on class. And the final essay assesses Obama as candidate and president. Particularly noteworthy is Sugrue's attention to Obama's post-Jeremiah Wright controversy speech in 2008 ('the most learned disquisition on race from a major political figure ever') and a splendid illumination of the roles played by books (particularly the work of William Julius Wilson), by mentors (political and clerical), and by family (especially Michelle Obama's) in Obama's ascent."—Publishers Weekly

"His work adds missing nuance and complexity to the discussion of the history of race and its present societal scars. Readers looking for simple answers or reasons to believe we are in a postracial America will be severely disappointed, as they should be. Readers willing to engage the complexity of race in contemporary American life and politics will find Sugrue's observations insightful and, at times, appropriately depressing."—Amy Black, Books & Culture

"Sugrue examines Obama's race speech during the presidential campaign that reflected the impulses of 'a more perfect union' and explores major themes of racial divisions, including the moral equivalence of black anger and white backlash."—Vernon Ford, Booklist

"Thomas Sugrue's fine book offers a cogent and powerful explanation for [the] mismatch between expectations and reality. He situates Barack Obama's personal racial and political odyssey in a richly textured history of race, class, and politics in the late twentieth century, and in Sugrue's deft and elegant prose, Obama's political biography becomes a lens through which American politics and race relations come into clearer view. . . . [T]he persistence of racial inequality in an apparently "post-racial" world—that is perhaps the most profound challenge facing American politics and society, and Sugrue's book is an essential guide to those who seek to answer that challenge."—Robert C. Lieberman, Political Science Quarterly

"In Not Even Past, one of America's most prominent historians of race and rights turns a shrewd and honest eye to the contemporary scene. It should be essential reading for anyone trying to understand the changes in racial experience and argument in America since the 1960s, and Barack Obama's place in them."—Daniel T. Rodgers, author of Atlantic Crossings: Social Politics in a Progressive Age

"In this brilliant work of contemporary history, Thomas Sugrue vividly reconstructs the America in which Barack Obama came of age, and expertly probes the varied political and intellectual influences that have shaped our president's thinking about race and civil rights. No one has written about the complexities of racial politics or Obama's racial compromises with more skill, insight, or erudition. A powerful and sobering book."—Gary Gerstle, author of American Crucible: Race and Nation in the Twentieth Century

"Thomas Sugrue's elegant book offers a compelling look at the state of American race relations at the moment of Obama's ascendancy. Embedding this political moment in the context of the complex portrait of civil rights developed in his previous work, Sugrue enables us to see both the power and also the limits of charismatic leadership in driving social change."—Mary L. Dudziak, author of Cold War Civil Rights: Race and the Image of American Democracy

"Not Even Past is a thoughtful reflection on Barack Obama's rise to the presidency and what it tells us—and doesn't tell us—about the meaning and significance of race in the twenty-first-century United States. Admirably concise and elegantly written, this book lays bare the mystique of the 'postracial' presidency without resorting to the kinds of unanchored generalizations and truisms that too often attend conversations about race."—Alice O'Connor, University of California, Santa Barbara