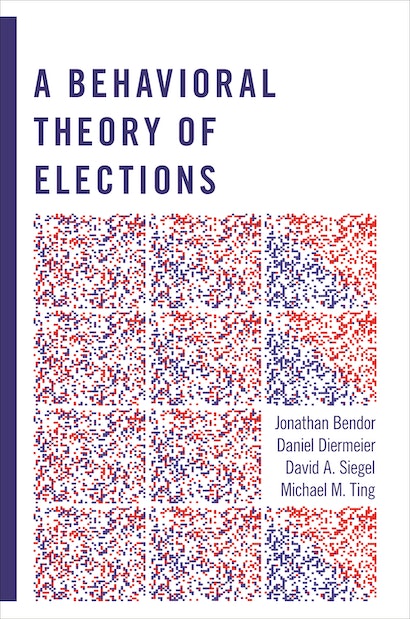 Most theories of elections assume that voters and political actors are fully rational. While these formulations produce many insights, they also generate anomalies — most famously, about turnout. The rise of behavioral economics has posed new challenges to the premise of rationality. This groundbreaking book provides a behavioral theory of elections based on the notion that all actors — politicians as well as voters — are only boundedly rational. The theory posits learning via trial and error: actions that surpass an actor’s aspiration level are more likely to be used in the future, while those that fall short are less likely to be tried later.


Based on this idea of adaptation, the authors construct formal models of party competition, turnout, and voters’ choices of candidates. These models predict substantial turnout levels, voters sorting into parties, and winning parties adopting centrist platforms. In multiparty elections, voters are able to coordinate vote choices on majority-preferred candidates, while all candidates garner significant vote shares. Overall, the behavioral theory and its models produce macroimplications consistent with the data on elections, and they use plausible microassumptions about the cognitive capacities of politicians and voters. A computational model accompanies the book and can be used as a tool for further research.

"[T]his book offers plenty food for thought for both theoretical and empirical minded scholars and is a must read for anyone interested in understanding the dynamics of electoral competition."—Jasper Muis, Journal of Artificial Societies and Social Simulation

"It . . . need[s] to be confronted and digested by every graduate student who hopes to make his or her scholarly name in this field, because it provides a way to unify the higgledy-piggledy world of political behavior. It isn't the final word, but it is an important early step."—Kenneth A. Shepsle, Perspectives on Politics

"Traditional approaches in political science and economics have failed to explain why people vote or take other actions that apparently have no basis in self-interest. In this pathbreaking book, the authors provide the analytical foundations for a new behavioral theory of political participation."—Stephen Ansolabehere, Harvard University

"The authors apply the insights of psychology and bounded rationality to construct a new foundation for our understanding of how voters and politicians behave in complex strategic environments. Bold and highly original, this fascinating book is essential reading for anyone with a serious interest in elections and will fundamentally reshape how we think about political behavior."—Alan Gerber, Yale University

"Given the complexity of social processes, many social scientists question the assumption of rationality underlying game theoretic models of elections. The natural solution, to assume bounded rationality, has been stifled by the abundance of possible alternative models. This wonderful book examines a class of models grounded in aspiration-based learning and shows how they produce deep, explanatory insights into voter choice, turnout, party competition, and electoral outcomes. A tour de force!"—Scott E. Page, author of The Difference and Diversity and Complexity

"Distinctive in its use of aspiration-based adjustment models as a replacement for the traditional rational choice approaches, this book is clearly the first to develop a coherent model of elections based on reinforcement learning. Clearly written and effectively presented, it will advance the debate on the use of both behavioral and rational choice models in political science."—Mark Fey, University of Rochester