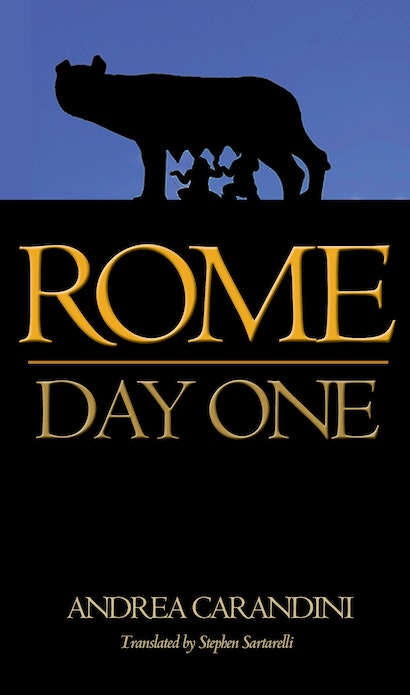 Andrea Carandini’s archaeological discoveries and controversial theories about ancient Rome have made international headlines over the past few decades. In this book, he presents his most important findings and ideas, including the argument that there really was a Romulus — a first king of Rome — who founded the city in the mid-eighth century BC, making it the world’s first city-state, as well as its most influential. Rome: Day One makes a powerful and provocative case that Rome was established in a one-day ceremony, and that Rome’s first day was also Western civilization’s.

Historians tell us that there is no more reason to believe that Rome was actually established by Romulus than there is to believe that he was suckled by a she-wolf. But Carandini, drawing on his own excavations as well as historical and literary sources, argues that the core of Rome’s founding myth is not purely mythical. In this illustrated account, he makes the case that a king whose name might have been Romulus founded Rome one April 21st in the mid-eighth century BC, most likely in a ceremony in which a white bull and cow pulled a plow to trace the position of a wall marking the blessed soil of the new city. This ceremony establishing the Palatine Wall, which Carandini discovered, inaugurated the political life of a city that, through its later empire, would influence much of the world.

Uncovering the birth of a city that gave birth to a world, Rome: Day One reveals as never before a truly epochal event.

Andrea Carandini is professor of archaeology at the University of Rome, La Sapienza, and the author of many books. For more than two decades, he has supervised some of the most important archaeological excavations in Rome, and he was instrumental in the discovery of the ancient Palatine Wall and the earliest phase of the Sanctuary of Vesta.

"Tradition assigns [the founding of Rome] to the year 753 B.C., when Romulus—who, according to legend, was rescued from infanticide with his twin brother Remus and suckled by a she-wolf—erected the first walls of the so-called Roma Quadrata, or 'square Rome.' It has been a very long time since anyone took this account as an accurate historical description, but Carandini provocatively suggests that it might be more or less true."—Adam Kirsch, New Yorker

"It has been assumed generally that the traditional founding of Rome by twin brothers Romulus and Remus 28 centuries ago should be classified as myth. This provocative examination by a highly regarded but controversial archaeologist suggests, however, that the story contains more than a grain of truth . . . he marshals considerable evidence, written and archaeological, to bolster his claims, and his conclusions certainly are startling and exciting."—Jay Freeman, Booklist

"Carandini's gifts as an archaeologist are admired even by those who don't accept his interpretations and Rome: Day One is full of fascinating detail."—The Age

"'It's a bold book, but will not persuade all readers,' said ancient Rome Professor Christopher Smith of the British School at Rome. '[Still] no one in recent years has done more than Carandini to challenge our perceptions.'"—New York Post

"Researchers will be intrigued with Carandini's precise picture of early Rome and the fine illustrations."—Choice

"What makes Rome: Day One such an extraordinary book is not the erudite descriptions but the energetic style of prose. For a volume so packed with detail, it remains an astonishingly easy read. . . . This is a book written to bring those early days to the attention of anyone and everyone."—Caldrail, UNRV History

"[T]he book is interesting because it discusses a topic that is much eschewed by the modern historians as it treads on controversial religious aspects."—Vaidehi Nathan, Organiser

"Uncovering the birth of a city that gave birth to a world, Rome reveals as never before a truly epochal event."—World Book Industry

"Dateline Rome, April 21, 753 BC. Andrea Carandini, archaeologist extraordinary, burrows down through thirteen meters of fill to hit pay dirt—Day 1 of Urbs Roma. What could be more exciting! History and archaeology rub shoulders with Freudian psychology as Carandini, a native of Rome, takes us on an enthralling guided tour through the material and written sources for the primal moment of the City that would create a World, our world. Urbi et Orbi, indeed."—Paul Cartledge, University of Cambridge

"A fascinating examination of how Rome began some twenty-eight centuries ago, written by an archaeologist whose many years of excavation have profoundly altered our understanding of the city and its history. Challenging, and often controversial, this book is a rewarding read both for the long-standing enthusiast and the newcomer to the subject, helping us to understand the development of the Roman state which went on to dominate so much of the known world."—Adrian Goldsworthy, author of Caesar: The Life of a Colossus

"Andrea Carandini's archaeological work in key areas of Rome will be fundamental to our understanding of the formative period of the city, and is part of the developing fascination with the beginnings of Rome. This translation brings the evidence, and Carandini's challenging interpretation, to a new audience."—Christopher Smith, director of the British School in Rome