A fascinating look at the evolutionary origins of cooperation 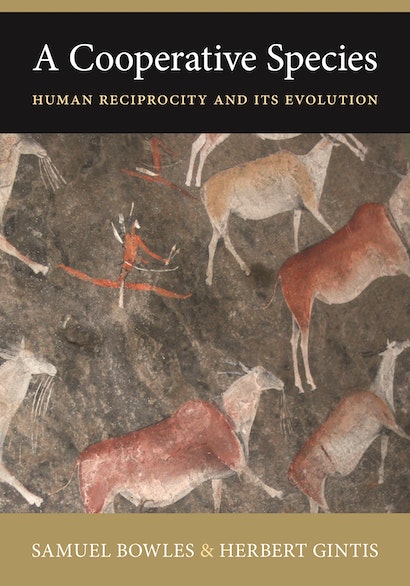 Why do humans, uniquely among animals, cooperate in large numbers to advance projects for the common good? Contrary to the conventional wisdom in biology and economics, this generous and civic-minded behavior is widespread and cannot be explained simply by far-sighted self-interest or a desire to help close genealogical kin.

In A Cooperative Species, Samuel Bowles and Herbert Gintis—pioneers in the new experimental and evolutionary science of human behavior—show that the central issue is not why selfish people act generously, but instead how genetic and cultural evolution has produced a species in which substantial numbers make sacrifices to uphold ethical norms and to help even total strangers.

The authors describe how, for thousands of generations, cooperation with fellow group members has been essential to survival. Groups that created institutions to protect the civic-minded from exploitation by the selfish flourished and prevailed in conflicts with less cooperative groups. Key to this process was the evolution of social emotions such as shame and guilt, and our capacity to internalize social norms so that acting ethically became a personal goal rather than simply a prudent way to avoid punishment.

Using experimental, archaeological, genetic, and ethnographic data to calibrate models of the coevolution of genes and culture as well as prehistoric warfare and other forms of group competition, A Cooperative Species provides a compelling and novel account of how humans came to be moral and cooperative.

"The achievement of Bowles and Gintis is to have put together from the many disparate sources of evidence a story as plausible as any we're likely to get in the present state of behavioural sciences of how human beings came to be as co-operative as they are."—W.G. Runciman, London Review of Books

"In A Cooperative Species, economists Samuel Bowles and Herbert Gintis update their ideas on the evolutionary origins of altruism. Containing new data and analysis, their book is a sustained and detailed argument for how genes and culture have together shaped our ability to cooperate. . . . By presenting clear models that are tied tightly to empirically derived parameters, Bowles and Gintis encourage much-needed debate on the origins of human cooperation."—Peter Richerson, Nature

"An outstanding book that presents an important contribution and quite simply raises the scientific standard associated with the difficult and contentious problem of how human altruism evolved."—Charles Efferson, Economic Journal

"A Cooperative Species: Human Reciprocity and Its Evolution states a clearly articulated gene-culture coevolution explanation for why we are a cooperative species. It is a read that will stretch readers' minds a bit, and I think it is an eminently valuable read. . . . I await with eagerness the next time Bowles and Gintis are out cooperating again."—Jonathan D. Springer, PsycCRITIQUES

"The authors' systematic and mathematical approach will appeal to any reader seriously interested in learning about alternative theories of adaptive altruism, and their treatment of cultural inheritance using population-genetic models is first-rate. Although this book will by no means settle the debate surrounding the evolutionary origin of altruism, it is a worthy addition and is well worth reading."—P. William Hughes, Journal of Economic Issues

"Bowles and Gintis are clearly not short of ideas. The attention they draw to the role of conflict and coordinated punishment in the evolution of our cooperative and reciprocal species makes the book very much worth reading. Their focus on the evolution of human nature also paints a much richer picture of our behavior than traditional economics tends to do."—Journal of Economic Literature

"Bowles and Gintis are not the first to claim that competition, conflict, and war between human groups is the foundation of cooperation and of society. However, their integration of this insight into evolutionary game theory stands to increase the accessibility of this powerful idea to a large number of scholars working in a dominant theoretical perspective that spans the social and biological sciences. This is one reason why I recommend their new book A Cooperative Species: Human Reciprocity and Its Evolution."—Noah Mark, Journal of Artificial Societies and Social Simulation

"This book makes a strong case for returning as a discipline to this vexed theme. I can only hope we do so with the analytical ingenuity and empirical humility that Bowles and Gintis display."—Jacob G. Foster, American Journal of Sociology

"Cooperative Species: Human Reciprocity and Its Evolution should be of interest to individuals across multiple disciplines. The book provides a compelling argument supported by multiple kinds of theoretical and empirical evidence. Although the book does use some technical language and examples in places, the explanation is sufficiently clear to make the main ideas and arguments of the book accessible to individuals who were not previously familiar with these technicalities."—Christopher M. Caldwell, Metapsychology Online

"[This book] makes important contributions to our understanding of the nature and function of emotions in politics, including the evolution of emotion and cognition and their linkages to democratic governance. . . . [It] should become [an] important resource for students of politics who have the requisite background in the behavioral sciences and wish to develop an integrated, life science perspective in their own work."—Michael S. Latner, Politics and the Life Sciences

"The book is a great success, offering a compelling theory of cooperation and conflict and how these two modes of interaction are inextricably linked. . . . For anyone interested in making sense of the evolution of human cooperation, I would highly recommend Bowles and Gintis's A Cooperative Species, for its theoretical insights and especially for the unmatched collection of data that bears on this question."—Karthik Panchanathan, Journal of Bioeconomics

"A Cooperative Species is a fresh and pioneering entry into the pivotal field of human social evolution."—Edward O. Wilson, Harvard University

"In A Cooperative Species, Bowles and Gintis draw on their own research and teaching about understanding the complex human being in the context of diverse ways of organizing life. They show that humans can evolve cooperative strategies when they participate in groups that share long-term similar norms and are willing to sanction those that do not follow group agreements. An important book for all social scientists."—Elinor Ostrom, Nobel Laureate in Economics

"Why we form cooperative societies is not hard to understand given all of the advantages we derive, but how we do it is far less understood. Humans have powerful selfish tendencies, but Bowles and Gintis are not of the school of thought that everything can be reduced to selfishness. They muster all of their expert knowledge to make clear that evolution has produced a species with a truly cooperative spirit and the means to encourage cooperation in others."—Frans de Waal, author of The Age of Empathy

"Bowles and Gintis stress that cooperation among individuals who are only distantly related is a critical distinguishing feature of the human species. They argue forcefully that the best explanation for such cooperation is altruism. Many will dispute this claim, but it deserves serious consideration."—Eric Maskin, Nobel Laureate in Economics