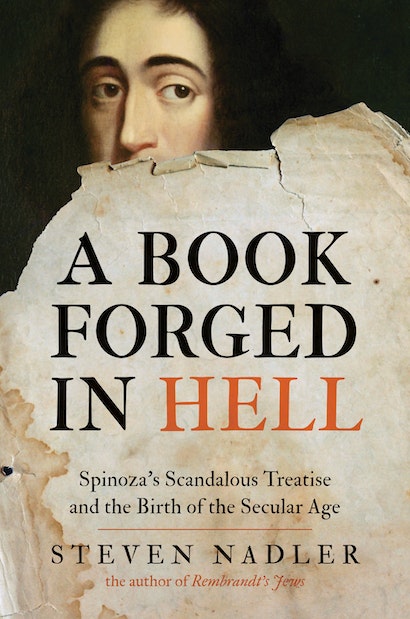 When it appeared in 1670, Baruch Spinoza’s Theological-Political Treatise was denounced as the most dangerous book ever published—”godless,” “full of abominations,” “a book forged in hell … by the devil himself.” Religious and secular authorities saw it as a threat to faith, social and political harmony, and everyday morality, and its author was almost universally regarded as a religious subversive and political radical who sought to spread atheism throughout Europe. Yet Spinoza’s book has contributed as much as the Declaration of Independence or Thomas Paine’s Common Sense to modern liberal, secular, and democratic thinking. In A Book Forged in Hell, Steven Nadler tells the fascinating story of this extraordinary book: its radical claims and their background in the philosophical, religious, and political tensions of the Dutch Golden Age, as well as the vitriolic reaction these ideas inspired.

It is not hard to see why Spinoza’s Treatise was so important or so controversial, or why the uproar it caused is one of the most significant events in European intellectual history. In the book, Spinoza became the first to argue that the Bible is not literally the word of God but rather a work of human literature; that true religion has nothing to do with theology, liturgical ceremonies, or sectarian dogma; and that religious authorities should have no role in governing a modern state. He also denied the reality of miracles and divine providence, reinterpreted the nature of prophecy, and made an eloquent plea for toleration and democracy.

A vivid story of incendiary ideas and vicious backlash, A Book Forged in Hell will interest anyone who is curious about the origin of some of our most cherished modern beliefs.

Steven Nadler is the William H. Hay II Professor of Philosophy at the University of Wisconsin-Madison. His books include Rembrandt's Jews, which was a finalist for the Pulitzer Prize; Spinoza: A Life, which won the Koret Jewish Book Award; and The Best of All Possible Worlds: A Story of Philosophers, God, and Evil in the Age of Reason (Princeton).

"In this clearly written and accessible book, Nadler offers up a historical and philosophical analysis of Spinoza's Theological-Political Treatise. . . . Each chapter not only focuses on sections of the Treatise but also explains the historical context of the Treatise and why many saw it as such a dangerous and corrupting book. . . . [Nadler] has definitely succeeded in writing an extremely rewarding and engaging book."—Library Journal

"[T]his is a groundbreaking analysis of an incendiary text."—Booklist

"Steven Nadler's new study of the Treatise, A Book Forged in Hell, succeeds. . . . While his tasks are primarily expository and contextual, Nadler, who is the author of the standard biography of Spinoza, puts forward a substantive thesis as well. . . . Guided by this set of claims, Nadler takes us through the Treatise in a detailed but seamless account of Spinoza's arguments and aims. One measure of his integrity, indeed, is that while endorsing the common portrayal of Spinoza as a founder of modern secularism, Nadler is sensitive to some of the ways in which Spinoza is not to be taken as the harbinger of the secular mindset. In fact, A Book Forged in Hell raises the important question of how appropriate it is to view Spinoza as a philosophical founder of contemporary secularism and especially of contemporary liberalism. It also raises the question of whether Spinoza should be understood as a Jewish thinker, if so, to what extent."—Zachary Micah Gartenberg, Jewish Review of Books

"Steven Nadler has written a delightfully lucid and philosophically thorough account of the Treatise that helps to explain how and why this singular text became the object of such opprobrium and why we should see its appearance as the 'the birth of the secular age.'. . . What makes Nadler's so welcome a contribution is the care and the clarity of his philosophical exposition, and his restraint when tracing the wider implications of Spinoza's work."—Peter Gordon, TNR.com's, The Book

"Without comparison the best among the available books on Spinoza in this category."—British Journal for the History of Philosophy

"Nadler shows, for a general audience, why Spinoza's Tractatus Theologico-Politicus evoked such opposition from contemporary religious and political readers. Nadler places Spinoza and his book in their historical context, explains the issues that were at stake, and discusses the book's subsequent influence. Persons interested in the history of political liberalism, modern Judaism, biblical interpretation, and early modern philosophy will welcome this excellent book."—Choice

"A Book Forged in Hell is . . . without comparison the best among the available books on Spinoza in this category."—British Journal for the History of Philosophy

"Steven Nadler, professor of philosophy at the University of Wisconsin-Madison has written a thoroughly engaging study of a book which, not only controversial in its day, may be said to have moved Biblical studies into a modern terminology and thrust. It will be a welcome addition to seminary and university libraries."—Morton J. Merowitz, Association of Jewish Library Reviews

"[A]ccomplished. . . . Few have accepted Spinoza's equation of God with Nature or his determinism. Yet his deconstruction of the Bible remains a towering achievement, a triumph of reason over ecclesiastical obfuscation. Nadler is to be applauded for making this achievement so accessible. God knows, the world still needs such enlightenment."—Jewish Chronicle

"Philosophy professor Steven Nadler tells the story of the book that scandalized early modern Europe—and laid the groundwork for modern republican, anticlerical, and anti-sectarian movements—in his readable A Book Forged in Hell."—Reason

"Nadler's book is a biography of the treatise and very much a page turner, a philosophical and political thriller, which demands to be bought, read and shared."—Derek Wall, Morning Star Online

"In this highly readable study, Steven Nadler persuasively shows that this scandalous work of modern philosophy deserves far more attention than it has actually received from scholars."—Grant Havers, European Legacy

"Steven Nadler's knowledge of the many influences acting on Spinoza is profound. He is as sensitive to Spinoza's reactions to Descartes and Maimonides as to the philosopher's fears of the conservative religious forces that were threatening the Dutch Republic of his day. The wide context that Nadler provides makes for a reading of Spinoza's treatise which is unfailingly rich, nuanced, and illuminating."—Rebecca Newberger Goldstein, author of Betraying Spinoza: The Renegade Jew Who Gave Us Modernity

"If there is a single theme that runs throughout Spinoza's writings, Steven Nadler says, 'it is the liberation from bondage, whether psychological, political, or religious.' Spinoza's importance as a philosopher—maybe as the philosopher of modernity—hinges on that. This Amsterdam Jew was one of the grandest and boldest mold-breakers of all time. Nadler gives us a clean, crisp, indispensable account of what made Spinoza's Treatise so revolutionary."—Russell Shorto, author of Descartes' Bones

"A Book Forged in Hell is more than just an excellent and highly readable introduction to one of the most important texts of philosophy and political thought. Steven Nadler provides an eloquent portrait of Spinoza's Treatise, placing it firmly in its historical, religious, political, and philosophical setting."—Jonathan Israel, author of A Revolution of the Mind: Radical Enlightenment and the Intellectual Origins of Modern Democracy

"This is an excellent book. Steven Nadler's wonderfully elegant and fluid writing style makes difficult ideas accessible and exciting without watering them down. A prime virtue of the book is that it provides just enough biographical and historical background to make the philosophy come alive and to reveal what a dramatic work Spinoza's Treatise is."—Michael Della Rocca, Yale University