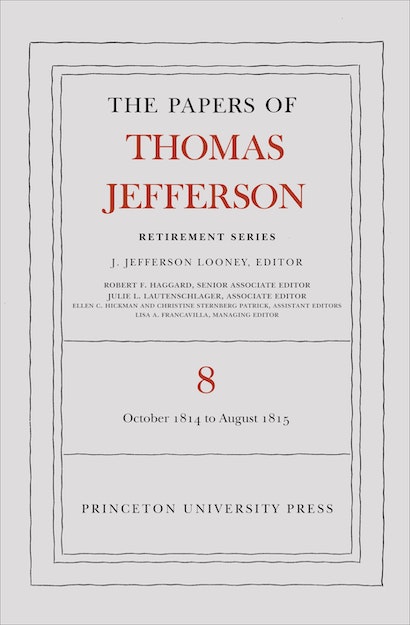 Volume Eight of the project documenting Thomas Jefferson’s last years presents 591 documents dated from 1 October 1814 to 31 August 1815. Jefferson is overjoyed by American victories late in the War of 1812 and highly interested in the treaty negotiations that ultimately end the conflict. Following Congress’s decision to purchase his library, he oversees the counting, packing, and transportation of his books to Washington. Jefferson uses most of the funds from the sale to pay old debts but spends some of the proceeds on new titles. He resigns from the presidency of the American Philosophical Society, revises draft chapters of Louis H. Girardin’s history of Virginia, and advises William Wirt on revolutionary-era Stamp Act resolutions. Jefferson criticizes those who discuss politics from the pulpit, and he drafts a bill to transform the Albemarle Academy into Central College. Monticello visitors Francis W. Gilmer, Francis C. Gray, and George Ticknor describe the mountaintop and its inhabitants, and Gray’s visit leads to an exchange with Jefferson about how many generations of white interbreeding it takes to clear Negro blood. Finally, although death takes his nephew Peter Carr and brother Randolph Jefferson, the marriage of his grandson Thomas Jefferson Randolph is a continuing source of great happiness.