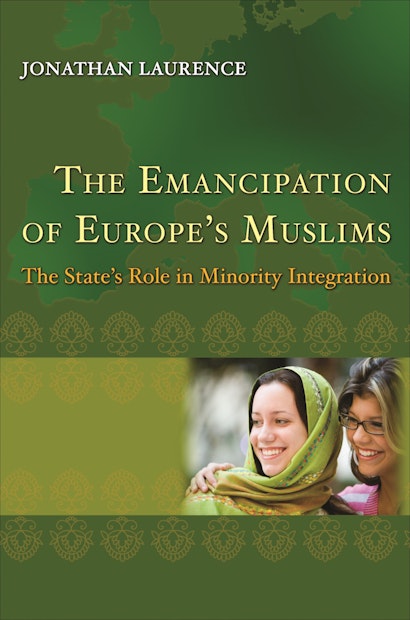 The Emancipation of Europe’s Muslims traces how governments across Western Europe have responded to the growing presence of Muslim immigrants in their countries over the past fifty years. Drawing on hundreds of in-depth interviews with government officials and religious leaders in France, Germany, Italy, the Netherlands, the United Kingdom, Morocco, and Turkey, Jonathan Laurence challenges the widespread notion that Europe’s Muslim minorities represent a threat to liberal democracy. He documents how European governments in the 1970s and 1980s excluded Islam from domestic institutions, instead inviting foreign powers like Saudi Arabia, Algeria, and Turkey to oversee the practice of Islam among immigrants in European host societies. But since the 1990s, amid rising integration problems and fears about terrorism, governments have aggressively stepped up efforts to reach out to their Muslim communities and incorporate them into the institutional, political, and cultural fabrics of European democracy.


The Emancipation of Europe’s Muslims places these efforts — particularly the government-led creation of Islamic councils — within a broader theoretical context and gleans insights from government interactions with groups such as trade unions and Jewish communities at previous critical junctures in European state-building. By examining how state-mosque relations in Europe are linked to the ongoing struggle for religious and political authority in the Muslim-majority world, Laurence sheds light on the geopolitical implications of a religious minority’s transition from outsiders to citizens. This book offers a much-needed reassessment that foresees the continuing integration of Muslims into European civil society and politics in the coming decades.

"The Emancipation of Europe's Muslims . . . looks at the largely unnoticed ways in which European governments have begun to integrate Muslims and Muslim organisations into public life. . . . Relying on extensive research and a wide range of interviews, Mr. Laurence has written an original and thought-provoking study."—Economist

"Laurence examines the transformation of the relations between Western European states and their Muslim populations. This ethnographically rich, well-documented book successfully reveals that European states (France, Germany, Italy, the Netherlands, and the UK) have more similarities than differences in terms of their interactions with Muslims. . . . [The Emancipation of Europe's Muslims] is very informative; it includes several figures and tables about Muslim demography, organizations, and representation in Western Europe. By emphasizing the complexity of state-Islam relations in Europe, it goes beyond simplistic dichotomies and clichés, and provides a much-needed, broad perspective on this important subject."—Choice

"Laurence's book is filled with thoughtful reflections and deep insights about one of the most fundamental political issues of our time and presents the result of a meticulous study of a long and complex political process, masterfully documented and made vivid with the help of a substantial body of evidence collected from a number of countries across Europe."—Reza Azarian, European Societies

"Laurence's study is rigorously researched and a noteworthy contribution to the field."—Sanam Vakil, International-Spectator

"The Emancipation of Europe's Muslims is a very impressive book. It is historically informed, theoretically rich, and comprehensive in its scope."—J. Christopher Soper, Journal of Church and State

"Jonathan Laurence has written a remarkably accurate and comprehensive study of European Islam that transcends clichés and polemics. He brilliantly elucidates the long-term trends that are transforming the children of migrants into European Muslims, acknowledging the tensions as well as the achievements of the process."—Olivier Roy, European University Institute, Florence

"Laurence's book is a splendid comparison of the management of religious—and especially Islamic—conflict in France, Italy, and Germany. Laurence arrays a range of convincing material to show that these countries followed similar pathways in managing their relations with Islam. The book holds out hope that Muslims may eventually be integrated within the political communities of these major European nations."—Sidney G. Tarrow, Cornell University

"Laurence has written a brilliantly mature book about a topic that frequently provokes sophomoric exaggeration. The book is remarkable for its practical acumen and comparative-historical depth. The Emancipation of Europe's Muslims is a unique accomplishment. It presents a strong alternative to current so-called common wisdom."—Jytte Klausen, author of The Cartoons That Shook the World

"The Emancipation of Europe's Muslims is an intelligent and thoughtful assessment of the changing relations of several European states to Islamic organizations and populations. Drawing on years of interviews with public Islamic leaders and state officials in a number of countries, this book will be a valuable guide at a broad level to the development of state-Islam relations in Western Europe."—John R. Bowen, author of Can Islam Be French?: Pluralism and Pragmatism in a Secularist State