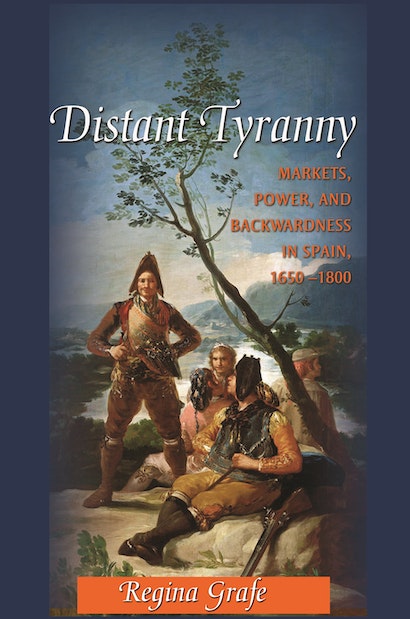 Spain’s development from a premodern society into a modern unified nation-state with an integrated economy was painfully slow and varied widely by region. Economic historians have long argued that high internal transportation costs limited domestic market integration, while at the same time the Castilian capital city of Madrid drew resources from surrounding Spanish regions as it pursued its quest for centralization. According to this view, powerful Madrid thwarted trade over large geographic distances by destroying an integrated network of manufacturing towns in the Spanish interior.


Challenging this long-held view, Regina Grafe argues that decentralization, not a strong and powerful Madrid, is to blame for Spain’s slow march to modernity. Through a groundbreaking analysis of the market for bacalao — dried and salted codfish that was a transatlantic commodity and staple food during this period — Grafe shows how peripheral historic territories and powerful interior towns obstructed Spain’s economic development through jurisdictional obstacles to trade, which exacerbated already high transport costs. She reveals how the early phases of globalization made these regions much more externally focused, and how coastal elites that were engaged in trade outside Spain sought to sustain their positions of power in relation to Madrid.

Regina Grafe is associate professor of history at Northwestern University.

"An economic historian of early modern Spain and its empire, Grafe examines Spain from 1650 to 1800 through a multidisciplinary lens to explore the limited extent to which it was emerging as a nation-state with integrated domestic markets. . . . Distant Tyranny is a revisionist work that will become mandatory reading for historians of early modern Spain. . . . [A] stimulating, thoughtful book."—Choice

"There is little to quibble with in Grafe's work. The early chapters build a solid foundation, based on detailed archival research and a meticulous tracing of market behavior. . . . [O]ne cannot help but admire the combination of a detailed, erudite analysis with a coherent macro-historical logic. . . . In a rare feat for an economic history book, Distant Tyranny may yet shed as much light on current events as it does on the past."—Mauricio Drelichman, EH.net

"Grafe's book, with its comparative approach and thorough documentation on Spain's economic and political fluctuations between the seventeenth and nineteenth centuries constitutes a major contribution to this reinterpretation of early modern Europe and Spain's role in its economic history."—Jesus Cruz, Human Figurations

"Grafe's excellent book joins the growing stack of studies that aim to strike down, once and for all, the tyranny of the shoddy teleology of Spanish historical development that miraculously has survived centuries of contrary evidence."—Ruth Mackay, American Historical Review

"Grafe's Distant Tyranny constitutes a provocative and fruitful historical exercise that provides a convincing narrative regarding the sources and historical consequences of market integration in Spain. The author offers a study that will appeal to a myriad of scholars, ranging from ones interested in general debates about how economics and politics interact to ones more specifically focused on Spanish history. In either case, the book puts forward new and exciting ideas to be further explored and debated. If historiography is supposed to be a reflective and anti-conformist practice, these pages serve as an excellent example."—Alejandro García Montón, European Review of History

Distant Tyranny provides an illuminating discussion of the territorial division of political authority in Spain and market integration there, with an innovative focus on the market in cod. This book is a wonderful contribution to European political and economic history and to the emerging field of global history."—Avner Greif, Stanford University

"Regina Grafe has written a challenging, courageous, and provocative book, one that reflects an extraordinary capacity to deal with an extremely wide literature not only on Spain but also the history of Europe. The dialogue between historical facts and economic theory is just outstanding."—Bartolomé Yun Casalilla, coeditor of The Castilian Crisis of the Seventeenth Century