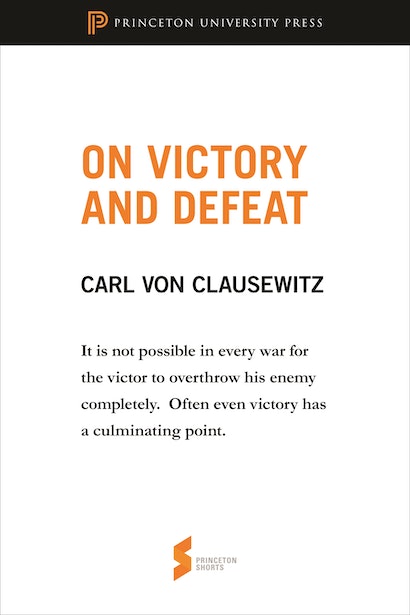 The seemingly endless wars in Iraq and Afghanistan have renewed the age-old debate over what constitutes military victory. Will the withdrawal of troops from Iraq and Afghanistan be seen as a sign of victory or defeat? Although the nature of warfare has changed dramatically since Clausewitz’s On War was first written, this selection from his classic work remains an invaluable source of insight for understanding what it means to achieve victory in war and how to recognize defeat.


Princeton Shorts are brief selections excerpted from influential Princeton University Press publications produced exclusively in eBook format. They are selected with the firm belief that while the original work remains an important and enduring product, sometimes we can all benefit from a quick take on a topic worthy of a longer book.


In a world where every second counts, how better to stay up-to speed on current events and digest the kernels of wisdom found in the great works of the past? Princeton Shorts enables you to be an instant expert in a world where information is everywhere but quality is at a premium. On Victory and Defeat does just that.

On War is the most significant attempt in Western history to understand war, both in its internal dynamics and as an instrument of policy. Since the work's first appearance in 1832, it has been read throughout the world, and has stimulated generations of soldiers, statesmen, and intellectuals.