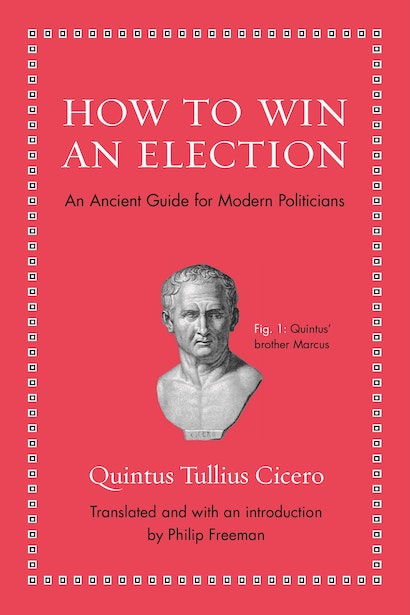 How to Win an Election is an ancient Roman guide for campaigning that is as up-to-date as tomorrow’s headlines. In 64 BC when idealist Marcus Cicero, Rome’s greatest orator, ran for consul (the highest office in the Republic), his practical brother Quintus decided he needed some no-nonsense advice on running a successful campaign. What follows in his short letter are timeless bits of political wisdom, from the importance of promising everything to everybody and reminding voters about the sexual scandals of your opponents to being a chameleon, putting on a good show for the masses, and constantly surrounding yourself with rabid supporters. Presented here in a lively and colorful new translation, with the Latin text on facing pages, this unashamedly pragmatic primer on the humble art of personal politicking is dead-on (Cicero won)—and as relevant today as when it was written.

A little-known classic in the spirit of Machiavelli’s Prince, How to Win an Election is required reading for politicians and everyone who enjoys watching them try to manipulate their way into office.

Philip Freeman is the author of many books, including Oh My Gods: A Modern Retelling of Greek and Roman Myths, Alexander the Great, and Julius Caesar (all Simon & Schuster). He received his PhD from Harvard University and holds the Qualley Chair of Classical Languages at Luther College in Decorah, Iowa.

"Were he alive today, no doubt, Quintus would be making big bucks as a political consultant. . . . Speaking to us from a distance of more than two millenniums, Quintus Cicero's words are incisive and revelatory: They remind us that, when it comes to that strange beast known as politics, human nature hasn't changed very much since then. The past, that's right, isn't even past."—Nick Owchar, Los Angeles Times

"Two thousand years ago, Quintus Tullius Cicero gave his elder brother, Marcus, an unusually frank guide to winning votes—and, on the principle that democracy's brutal essentials have changed little over the centuries, Princeton University Press has now brought out How to Win an Election. . . . [The book] shows that a campaigner's concerns have remained just as constant as the debate about whether any democracy is ever democratic enough."—Peter Stothard, Wall Street Journal

"Just in time for the primaries and the big showdown in November comes the wisdom of the ancients, in this case from Quintus Tullius Cicero, younger brother of Marcus, the greatest ancient Roman orator—perhaps the greatest of all time—who, more than two thousand years ago, ran for the highest office in the Roman Republic."—Steve Levingston, WashingtonPost.com's Political Bookworm blog

"[Quintus Cicero's] How to Win an Election is a quick, punchy, and thoroughly entertaining read, cleanly translated by Philip Freeman, chairman of the classics department at Luther College."—John Kass, Chicago Tribune

"The advice holds up. These candidates must have classics scholars on staff, because a close read of Cicero reveals they're following his counsel."—David Weigel, Slate

"Besides the fact that this small book contains such time-worn advice as 'promise everything to everybody' to the value of being a social chameleon, I learned that sexual scandals were fodder for upending an opponent's political campaign even as far back as 64 B.C. Well, as they say, mutatione rerum magis, tanto magis stetisse ('the more things change, the more they stay the same'), or something like that."—Guardian.co.uk's, GrrlScientist

"I just hope my opponent in the next campaign doesn't get a copy."—James Carville, Foreign Affairs

"There is solace at hand in this little book, which takes only a few minutes to read. . . . Translated (the Latin text appears on facing pages) and put in context by Philip Freeman, whose biography of Julius Caesar was widely praised, the letter is cynical, worldly wise, and oddly reassuring."—John Wilson, Christianity Today

"One of the more entertaining books of this campaign season comes to us from 2,000 years ago. . . . [C]icero's memo accurately describes today's politics."—Joshua Rothman, Boston Globe

"The release of [How to Win an Election] was no doubt timed to coincide with this year's U.S. presidential election and as campaigning unfolds it's hard not to see some of Quintus' advice in practice. . . . This text has an almost whimsical quality and bluntly lays out what has been all but established practice in politics for—as the book proves—millennia."—Prague Post

"A quick and fairly broad sketch of Roman politics in Cicero's era."—Scott McLemee, Inside Higher Ed

"Candidates, voters and dedicated observers of this vaunted political ritual would do well to take a deep breath and pick up a copy of How to Win an Election. . . . At once a validation of how we humans choose our leaders and cunning in the way of Machiavelli's The Prince, Quintus Cicero's words of wisdom, filtered through the fluid new translation by Philip Freeman, are sobering and more than a little deliciously self-serving."—Carol Herman, Washington Times

"The primer, subtitled An Ancient Guide for Modern Politicians, written more than 2,000 years ago by Quintus Tullius Cicero for his brother Marcus Cicero, the famed orator, who was a candidate for consul of Rome in 64 B.C., but you would have to be a resident of Mars or maybe Pluto not to see its modern relevance. . . . Quintus Cicero shows himself to be a master political strategist of oppositional research, organization, and turnout. The little book, translated from Latin to vernacular English by Philip Freeman, should remain on the desks of office-seekers for the next four years, its principles underlined."—Suzanne Fields, Washington Times

"In 64 B.C., Cicero wrote his older brother a letter of advice guiding him on how to win his race for consul. Nearly 3,000 years later, it remains stunningly relevant, and it emerges as key evidence that some things never change, like political trickery, tactics of manipulation, the art of making a sale. . . . It is a book that reads as if it were written by David Axelrod or Karl Rove, who incidentally provides a glowing blurb on the back cover of one of the editions."—David Masciotra, Daily Beast

"Suffice it to say that today's political advisors could learn a lot from reading advice, now almost 2,100 years old, to an aspiring politician."—Bruce Whiteman, Wapsipinicon Alamanac

"In his election advice to his brother Marcus, Quintus Cicero shows himself to be a master political strategist with a clear understanding of opposition research, organization, and turnout (though a little weak on message). Fresh, lively, and sharp, this primer provides timeless counsel and a great read for the modern political practitioner."—Karl Rove, former deputy chief of staff and senior advisor to President George W. Bush

"Given the lowly state of politics these days, this ancient Roman handbook on electioneering shows how little has changed. Freeman has done a masterful job of bringing this delightful text into the modern day—so masterful that one might think it was actually a spoof."—Gary Hart, former U.S. senator

"Loaded with down-and-dirty advice on how to sway voters and win office in ancient Rome, this practical campaign handbook offers shameless hints for political hopefuls of any era: making and breaking promises, networking and calling in favors, spreading rumors, appealing to special interests, speechifying, pressing the flesh, and more. Wickedly funny, astute, and timeless!"—Adrienne Mayor, author of The Poison King: The Life and Legend of Mithradates, Rome's Deadliest Enemy

How to Run a Country 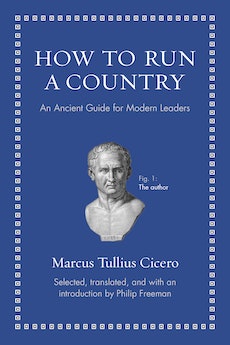 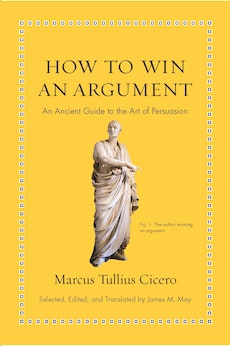