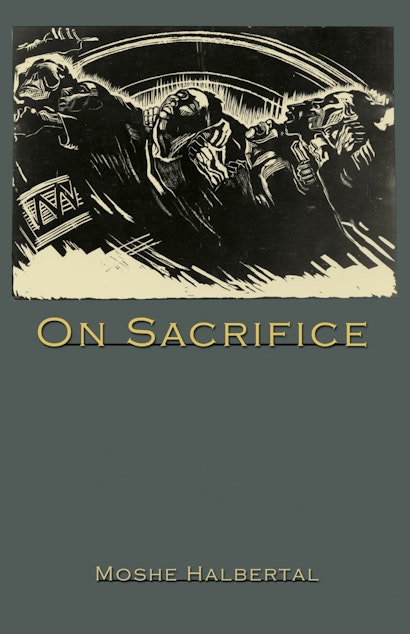 The idea and practice of sacrifice play a profound role in religion, ethics, and politics. In this brief book, philosopher Moshe Halbertal explores the meaning and implications of sacrifice, developing a theory of sacrifice as an offering and examining the relationship between sacrifice, ritual, violence, and love. On Sacrifice also looks at the place of self-sacrifice within ethical life and at the complex role of sacrifice as both a noble and destructive political ideal.


In the religious domain, Halbertal argues, sacrifice is an offering, a gift given in the context of a hierarchical relationship. As such it is vulnerable to rejection, a trauma at the root of both ritual and violence. An offering is also an ambiguous gesture torn between a genuine expression of gratitude and love and an instrument of exchange, a tension that haunts the practice of sacrifice.


In the moral and political domains, sacrifice is tied to the idea of self-transcendence, in which an individual sacrifices his or her self-interest for the sake of higher values and commitments. While self-sacrifice has great potential moral value, it can also be used to justify the most brutal acts. Halbertal attempts to unravel the relationship between self-sacrifice and violence, arguing that misguided self-sacrifice is far more problematic than exaggerated self-love. In his exploration of the positive and negative dimensions of self-sacrifice, Halbertal also addresses the role of past sacrifice in obligating future generations and in creating a bond for political associations, and considers the function of the modern state as a sacrificial community.

Moshe Halbertal is the Gruss Professor of Law at New York University School of Law and professor of Jewish thought and philosophy at the Hebrew University of Jerusalem. His books include Concealment and Revelation: Esotericism in Jewish Thought and its Philosophical Implications (Princeton) and People of the Book: Canon, Meaning, and Authority.

"This is a brilliant book."—Robert A. Segal, Times Higher Education

"If one of the lessons of the Biblical and Midrashic accounts of the giving of the Torah at Sinai is that revelations abound in small venues, then this is an apt metaphor for this small, fascinating, and brilliant work by noted scholar and philosopher Moshe Halbertal. Covering issues of sacrifice to and sacrifice for, Halbertal takes the reader on a thought-provoking journey from the biblical story of Cain and Abel through the binding of Isaac and into modern times, with reflections on the meaning of individual and national sacrifice as it manifests itself in military actions and wars conducted by both Israel and the United States."—William Liss-Levinson, Jewish Book World

"An exacting and lucidly written narrative."—Choice

"The book presents a good basis for further discussion of the use of sacrifice-related terminology in political and economic discourse. Anyone interested in the continued significance of ancient concepts, ideas, and rituals in modern life and thinking would benefit from reading this book."—Catherine Hezser, LSE Politics and Policy blog

"This is a fascinating book on a critical religious concept, but one that is best suited to the academic or philosophically trained reader."—Association of Jewish Library Reviews

"On Sacrifice is an intensely satisfying analysis of a subject whose complexity and the implications thereof likely eludes most of us who think they know what 'sacrifice' is really all about. It is a worthy addition to Professor Halbertal's already impressive bibliography."—Charles H Middleburgh, Middleburgh Blog

"I can only hope that this highly schematic overview conveys something of the richness of ideas which Moshe Halbertal has elegantly packed into his short book."—Berel Dov Lerner, Philosophy in Review

"[T]here is no doubt that Halbertal is a master guide through both foreign and familiar terrains. He has the rare ability to revivify arcane topics and texts without sacrificing their complexity on the altar of relevance. The result is a rich and genuinely exciting discussion, one that leaves the philosophically inclined reader with a deep sense that the seemingly narrow and dated topic of sacrifice may be central to contemporary attempts to understand what it is to live a meaningful life."—Jeremy Wanderer, Jewish Review of Books

"This brief book is a compact, in-depth analysis of the meanings of sacrifice in Jewish-Christian culture; it points out both the benign and malignant aspects that have tethered the philosophical- theological conversation swirling around this issue down the centuries. Halbertal is a scholar's scholar."—Donald J. Dietrich, European Legacy

"Moshe Halbertal . . . has written a masterpiece. Sacrifice is the most primary and basic form of ritual, and in On Sacrifice, Professor Moshe Halbertal has made that eminently clear. Like his other writings, this is profound and deep work, and one definitely worth reading."—Ben Rothke, Times Of Israel

"Halberthal presents an exacting and lucidly written narrative about the sense and essence of sacrifice from religious biblical injunction of animal sacrifices to patriotic ideas such as self-sacrifice in war."—Zev Garber, Studies in Judaism, Humanities, and the Social Sciences

"Moshe Halbertal has a tremendous knack for turning arcane topics and esoteric texts into the most exciting and topical ideas to think about. On Sacrifice moves from biblical practices of animal sacrifice to modern ideas about self-sacrifice in war. The book is at its most profound in sorting out the relation between violence and sacrifice. Altogether, this is a very moving and deep book—philosophically, anthropologically, and religiously."—Avishai Margalit, author of On Compromise and Rotten Compromises

"A rich, fresh, and gently intense meditation, and one that will engage anyone interested in what the author calls 'the most primary and basic form of ritual' known to humankind. Halbertal is especially compelling in his treatment of the slippery dynamics between the violent and transcendent aspects of sacrifice, and their echoes across moral and political registers of the real."—Peter Cole, translator and editor of The Dream of the Poem: Hebrew Poetry from Muslim and Christian Spain, 950—1492

"This is an important book, full of wonderful ideas about biblical sacrifice, which demonstrates Halbertal's unique ability to conceptualize biblical and rabbinic texts, drawing philosophically interesting implications from their language and narratives. His account of sacrifice as a gift in a hierarchically asymmetric structure provides a corrective to those who would simply appropriate Mauss' theory, and Halbertal's take on the relation between sacrifice and violence reverses in many ways Girard's approach."—Josef Stern, University of Chicago