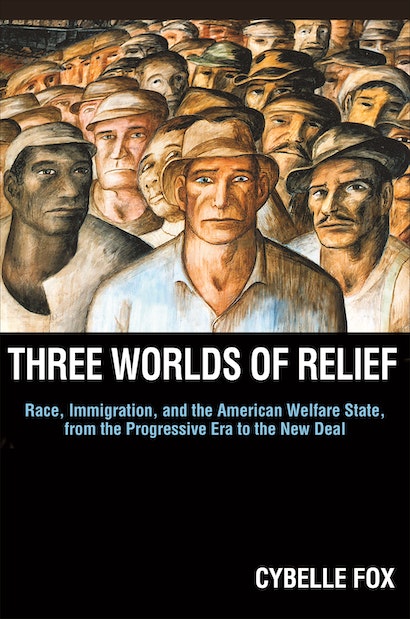 Three Worlds of Relief examines the role of race and immigration in the development of the American social welfare system by comparing how blacks, Mexicans, and European immigrants were treated by welfare policies during the Progressive Era and the New Deal. Taking readers from the turn of the twentieth century to the dark days of the Depression, Cybelle Fox finds that, despite rampant nativism, European immigrants received generous access to social welfare programs. The communities in which they lived invested heavily in relief. Social workers protected them from snooping immigration agents, and ensured that noncitizenship and illegal status did not prevent them from receiving the assistance they needed. But that same helping hand was not extended to Mexicans and blacks. Fox reveals, for example, how blacks were relegated to racist and degrading public assistance programs, while Mexicans who asked for assistance were deported with the help of the very social workers they turned to for aid.


Drawing on a wealth of archival evidence, Fox paints a riveting portrait of how race, labor, and politics combined to create three starkly different worlds of relief. She debunks the myth that white America’s immigrant ancestors pulled themselves up by their bootstraps, unlike immigrants and minorities today. Three Worlds of Relief challenges us to reconsider not only the historical record but also the implications of our past on contemporary debates about race, immigration, and the American welfare state.

Cybelle Fox is assistant professor of sociology at the University of California, Berkeley. She is the coauthor of Rampage: The Social Roots of School Shootings.

"Thoroughly researched and well written, the book enhances the literature on immigration and ethnicity."—Choice

"Three Worlds of Relief covers new territory in social welfare history and will interest academics and students in the field. Of particular importance to the social work profession is the author's attention to the role that social workers played in advocating both for progressive legislation and practice, except in the West and Southwest."—Marguerite G. Rosenthal, Journal of Sociology & Social Welfare

"Three Worlds of Relief reminds us that welfare policies must be measured by their implementation and effects as well as their intent. State and local authorities have the power to accentuate or to mute ethnic and racial biases in ways that undermine or enhance the mission of dispensing benefits impartially. Students, scholars, and practitioners concerned with the problem of inequality in the welfare state will find this book illuminating."—Lara Vapnek, Journal of Children and Poverty

"Fox's scholarship provides a detailed and rich portrait of how racism and race-based nativism, in conjunction with political and economic interests, shaped the design and implementation of U.S. welfare policies. . . . [T]his book is necessary reading for advanced scholars of U.S. social policy, welfare, poverty, and race and immigration and is highly recommended for graduate courses on these topics as well as historical and comparative methods."—Ellen Reese and Michael Walker, American Journal of Sociology

"Fox has set a scholarly agenda for a new social history of the American welfare state that will integrate the Southwest into a story largely about the Deep South and Northeast and that will bring Mexican immigrants into narratives told largely in black-and-white. Most importantly, this book and the work that will follow it has the potential to show how essential an active welfare state is to making immigration a driver of individual economic opportunity and national economic growth."—Jeffrey Helgeson, Southwestern Historical Quarterly

"Fox's work is intended to inject new perspective into current debates about relief, citizenship, and state aid. It succeeds in reframing our understanding of the origins of the welfare state, and deserves to be widely read by scholars of immigration history, political history, and social history."—Sarah Elvins, Labour

"[T]his is an excellent book that will intrigue scholars and provoke subsequent scholarship and debate. The book could be used effectively in a wide variety of graduate seminars in several disciplines. Reading this book is well worth the investment as there is so much new here, it is so well written, and it is such a great model for excellent historical scholarship. Scholars in many areas should (and probably will) read this book and debate its richness and complexity."—David Brady, Journal of Social History

"The analysis is both historically rich and analytically sharp."—Elisabeth S. Clemens, Social Forces

"Three Worlds of Relief is theoretically important, empirically rich, and a major contribution to scholarship on race, immigration, and welfare policy. Fox brings together the experiences of Mexicans, white immigrants, and African Americans into a single account, in the process enriching current knowledge of each group's history in the United States and illuminating how these histories fed into government policy. Three Worlds of Relief is an outstanding work of scholarship. Fox traces the distinct paths of blacks, Mexicans, and white immigrants as they were incorporated into the American welfare state in the key decades culminating in the New Deal. Her argument is fresh and original, her research meticulous, and her prose elegant. Three Worlds of Relief is an intellectual tour de force that sets a new scholarly agenda"—Desmond King, author of Separate and Unequal: African Americans and the U.S. Federal Government

"Cybelle Fox's Three Worlds of Relief demonstrates that U.S. social policies in their formative years provided disparate treatment by race and ethnicity. Political, labor-market, and racial contexts advantaged European immigrants and disadvantaged African Americans and Mexican immigrants. This book is a must-read for anyone seeking to understand the origins of the uneven U.S. welfare state, its race and ethnic politics, and political dilemmas today."—Edwin Amenta, University of California, Irvine

"Three Worlds of Relief is an original study that significantly enhances our understanding of the historical boundaries of social citizenship in the United States. Cybelle Fox reveals how different political systems and race and labor market relations in three separate regions of the country resulted in profoundly dissimilar experiences for blacks, Mexicans, and European immigrants in the American welfare system. This insightful book is a must-read."—William Julius Wilson, Harvard University

"Three Worlds of Relief is a tour de force of historical analysis that presents a bold reinterpretation of U.S. welfare provision during the early decades of the twentieth century. I know of no work that offers a more compelling account of how poor relief in this era was shaped by the interplay of race, immigration, and political economy. Emphasizing regional differences across a decentralized system, Cybelle Fox challenges longstanding assumptions in U.S. welfare scholarship. Her study is a major contribution to the field."—Joe Soss, University of Minnesota

"Rigorously researched, clearly argued, and written with verve and style, Three Worlds of Relief is a pathbreaking study of the interplay of race, labor, and politics in the building of America's welfare state. Fox brings a fresh and important new perspective to the study of American political development that could not be more timely. This is an excellent book."—Robert C. Lieberman, author of Shaping Race Policy