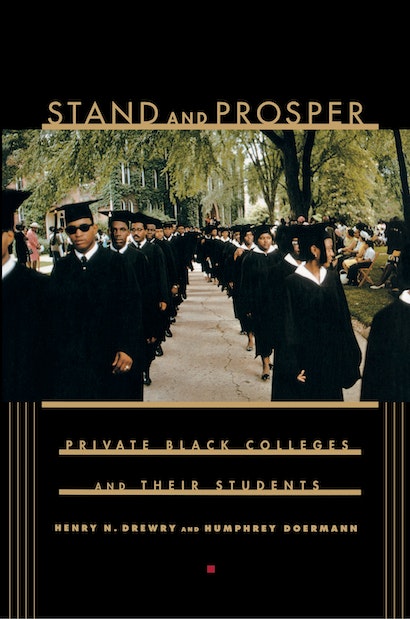 Stand and Prosper is the first authoritative history in decades of black colleges and universities in America. It tells the story of educational institutions that offered, and continue to offer, African Americans a unique opportunity to transcend the legacy of slavery while also bearing its burden. Henry Drewry and Humphrey Doermann present an up-to-date and comprehensive assessment of their past, present, and possible future.


Black colleges fully got off the ground only after the Civil War — more than two centuries after higher education formally began in British North America. Despite horrendous obstacles, they survived and even proliferated until well past the mid-twentieth century. As the authors show, however, the 1954 U.S. Supreme Court ruling in Brown v. Board of Education brought them to a crucial juncture. While validating the rights of blacks to pursue opportunities outside racial and class lines, it drew the future of these institutions into doubt. By the mid-1970s black colleges competed with other colleges for black students — a welcome expansion of choices for African-American youth but a huge recruitment challenge for black colleges.


The book gradually narrows its focus from a general history to a look at the development of forty-five private black colleges in recent decades. It describes their varied responses to the changes of the last half-century and documents their influence in the development of the black middle class. The authors underscore the vital importance of government in supporting these institutions, from the Freedman’s Bureau during Reconstruction to federal aid in our own time.

Stand and Prosper offers a fascinating portrait of the distinctive place black colleges and universities have occupied in American history as crucibles of black culture, and of the formidable obstacles they must surmount if they are to continue fulfilling this important role.

Henry N. Drewry is Senior Advisor to the Mellon Foundation, where he was a program officer from 1988 to 1997. He served on the Board of Trustees of Talladega College, and has taught at both the college and high-school level. He was Director of the Teacher Preparation Program and Lecturer in History at Princeton University. Humphrey Doermann is Assistant to the President and Research Associate in Economics at Macalester College. He was Director of Admissions and chief staff budget officer for the Harvard Faculty of Arts and Sciences. He served as President of the Bush Foundation, and is the author of two books on college admissions and financial aid.

"The book includes much factual data on the colleges but aptly conveys the important contributions of these schools as race relations have evolved and the challenges they face in the future, ranging from chronic underfunding to attacks on affirmative action. A valuable resource."—Booklist

"Stand and Prosper is a very informative read. [It] is a great book for teenagers on their way to college, or for an inquisitive parent searching for the right place to send their child."—Kurt London, Black Diaspora

"[A] landmark study. . . . It is a 'first:' an authoritative, comprehensive study of the forty-five private four-year colleges in the United States, complete with data, historical facts, and institutional case studies. . . . The conclusions reached by Drewry and Doermann . . . are encouraging for the future of black colleges and for any institution truly dedicated to learning."—Elizabeth S. Blake, About Campus

"Historically black colleges and universities are an integral part of the American system of higher education. . . . Stand and Prosper makes a meaningful contribution to the ongoing quest for understanding, recognition, and appreciation of these institutions."—Ronyelle B. Ricard and M. Christopher Brown, Journal of Higher Education

"Stand and Prosper is the most comprehensive account of the evolution of private black colleges ever produced, and therefore will make a significant contribution to the field of higher education. The data and information provided are exceptional and the documentation will make this a very useful book for scholars and researchers as well as a general audience."—Michael Nettles, University of Michigan

"Both an excellent history of private historically black colleges and universities as well as an important assessment of the critical needs and policy areas that impact directly on their futures. Parts of the history are so compelling that one could piece together sections and make an effective case for reparations to the black community for centuries of abuse and deprivation."—William H. Gray III, President and CEO, United Negro College Fund