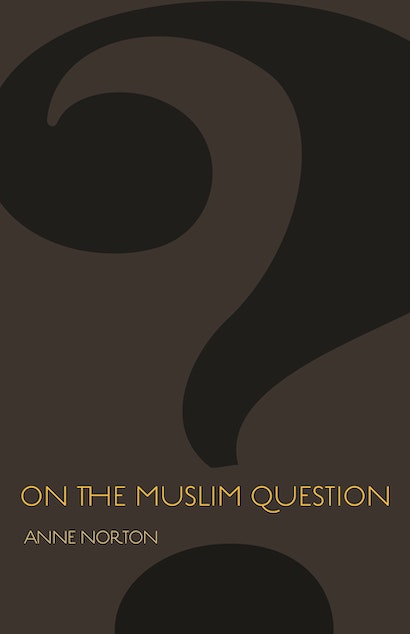 In the post-9/11 West, there is no shortage of strident voices telling us that Islam is a threat to the security, values, way of life, and even existence of the United States and Europe. For better or worse, “the Muslim question” has become the great question of our time. It is a question bound up with others — about freedom of speech, terror, violence, human rights, women’s dress, and sexuality. Above all, it is tied to the possibility of democracy. In this fearless, original, and surprising book, Anne Norton demolishes the notion that there is a “clash of civilizations” between the West and Islam. What is really in question, she argues, is the West’s commitment to its own ideals: to democracy and the Enlightenment trinity of liberty, equality, and fraternity. In the most fundamental sense, the Muslim question is about the values not of Islamic, but of Western, civilization.

Moving between the United States and Europe, Norton provides a fresh perspective on iconic controversies, from the Danish cartoon of Muhammad to the murder of Theo van Gogh. She examines the arguments of a wide range of thinkers — from John Rawls to Slavoj Žižek. And she describes vivid everyday examples of ordinary Muslims and non-Muslims who have accepted each other and built a common life together. Ultimately, Norton provides a new vision of a richer and more diverse democratic life in the West, one that makes room for Muslims rather than scapegoating them for the West’s own anxieties.

Anne Norton is professor of political science at the University of Pennsylvania. Her books include Leo Strauss and the Politics of American Empire; 95 Theses on Politics, Culture, and Method; and Republic of Signs.

"Is there a clash of civilizations, as Samuel Huntington maintained, between the Muslim world and the West? Norton's response will be of interest to students of geopolitics and Islamic studies."—Kirkus Reviews

"She scores many hits, and illuminates the smug racism behind much recent blazoning of Enlightenment values."—Paul Laity, Prospect

"Two strengths make Norton's work stand out in the crowded field of books that address Islam and democracy. First is her insistence on considering Islamic voices of the past and present, from medieval philosopher al-Farabi to Qutb and Ramadan, as conversation partners within the Western tradition. Second is her concise rebuttal of prominent philosophers, in particular Jacques Derrida, John Rawls and Slovaj Zizek, each of whom has perceived a danger in the nature of Islam."—Steve Young, Christian Century

"Professor Anne Norton of the University of Pennsylvania, is a liberal academic who takes on all the anti-Muslim hysterics, right wing paranoiacs and sloppy thinkers in this measured and profoundly thought-provoking book."—Charles H. Middleburgh, Middleburgh Blog

"Anne Norton provides us with a window into the interaction between European versions of modernity and the Islamic experience, drawing attention to how Muslims often face resistance and hatred as they enter into previously constituted elements of European society."—Tikkun

"Anne Norton's On the Muslim Question . . . is distinguished by moral daring and intellectual perspicacity, that is bold and passionate in tone but also rigorous and academic in substance. . . . Anne Norton's scholarly effort, as much an academic tract as a pamphlet and a political statement, redeems all those promises and amply testifies to the intellectual and moral resources of the academy as well as its integrity."—S. Parvez Manzoor, Muslim World Book Review

"Anne Norton . . . has written an incisive volume analyzing a question at the heart of a number of contemporary vexing domestic and foreign policy issues. She brings to the task an impressive command of the subject matter as well as exceptional insight and judgment as a political theorist."—Mujeeb Khan, H-Net Reviews

"[T]he book is an insightful analysis of the way Islam and Muslims figure in contemporary discourses, and it should be read by students and scholars interested in representations of Islam and Muslims. I recommend it."—Lasse Thomassen, Political Studies Review

"This will be excellent and important reading for missiologists, social anthropologists, political scientists, and others."—Bruce Campbell Moyer, Seminary Studies

"On the Muslim Question, is an indispensable reading for scholars as well as those interested in understanding the complex relationship between Islam and the West."—Asif Mohiuddin, Islam and Civilisational Renewal

"On the Muslim Question combines virtues rarely found in one place. It is scrupulously attentive to the everyday facts about the ways in which the Muslim and non-Muslim worlds interact and devastatingly sharp about the way in which the facts undermine a lot of high-flown commentary on the supposed threat the Muslim world poses to the West. . . . [Norton] is a witty and graceful writer. . . . On The Muslim Question is a triumph."—Alan Ryan, Journal of Church and State

"This is an extraordinary book—an impassioned, astute, and erudite critique that strongly refutes the 'clash of civilizations' rhetoric and the stereotypes shaping contemporary discussions of Muslims in the West. It further proposes a concrete alternative vision of democracy in diverse societies. The argument is original and sophisticated and the writing is beautiful—graceful, assertive, and clear. I think this book will achieve instant status as a classic of our time."—Joan W. Scott, Institute for Advanced Study

"This is a crisp and bracing snapshot of the ways in which the so-called Muslim problem serves as a repository for a host of Euro-American anxieties, fears, and doubts rather than as an accurate reflection of Islam or the behavior of actual Muslims. One of the great strengths of the book is how it joins a wonderfully eclectic journey through politics, film, scholarship, clothing, fiction, and language with an attention to the different ways the United States and Europe formulate and respond to 'the Muslim problem."—Roxanne Euben, Wellesley College