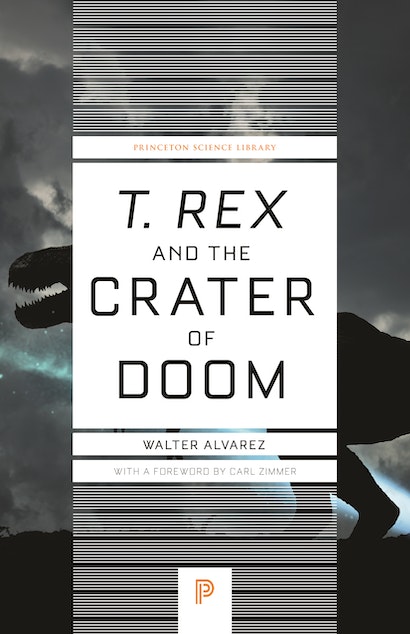 Sixty-five million years ago, a comet or asteroid larger than Mount Everest slammed into the Earth, inducing an explosion equivalent to the detonation of a hundred million hydrogen bombs. Vaporized detritus blasted through the atmosphere upon impact, falling back to Earth around the globe. Disastrous environmental consequences ensued: a giant tsunami, continent-scale wildfires, darkness, and cold, followed by sweltering greenhouse heat. When conditions returned to normal, half the plant and animal genera on Earth had perished.

This horrific chain of events is now widely accepted as the solution to a great scientific mystery: what caused the extinction of the dinosaurs? Walter Alvarez, one of the Berkeley scientists who discovered evidence of the impact, tells the story behind the development of the initially controversial theory. It is a saga of high adventure in remote locations, of arduous data collection and intellectual struggle, of long periods of frustration ended by sudden breakthroughs, of friendships made and lost, and of the exhilaration of discovery that forever altered our understanding of Earth’s geological history.

Walter Alvarez is professor of geology at the University of California, Berkeley.

"[D]eft and readable . . . T. rex and the Crater of Doom gets the facts across in a lighthearted, almost playful manner. But it's also solid science, a clear and efficient exposition that conveys plenty of cogent detail while keeping an eye on the subtle interplay of thought, action, and personality that makes scientific research such arresting human behavior. . . . [An] estimable account from the world's leading authority on death from above."—Timothy Ferris, New York Times Book Review

"A geologist (who happens to be a kind of working philosopher) gives a deft, readable explanation of the extinction of the dinosaurs."—New York Times Book Review

"The book is very well written and so engrossing that a reader with little or no background in the earth's geologic history will enjoy an easy and vastly entertaining summary of how we came to our present understanding of the past. It is a wonderful adventure in science."—Dale Russell, The Los Angeles Times Book Review

"An unfolding story told by its leading protagonist. . . . Very clearly and entertainingly written, and illustrated with fascinating colour plates, it is accessible even to nonspecialists."—Arthur C. Clarke, The Times Higher Education Supplement

"A fascinating proof of a once ridiculed theory. In fitting together the puzzle of dino demise, Alvarez excitingly shapes the story for the widest audience."—Booklist

"Every library with geology holdings will want to have this book. . . . Alvarez offers a great detective story. . . ."—Choice

"A first-rate, swiftly paced tale of how science can propel its participants down avenues of surprising discovery to breathtaking conclusions."—Charles Petit, San Francisco Examiner & Chronicle

"This personal account of the search for a geological Excalibur makes fascinating reading. . . . [It] reads like Arthurian legend, full of temptations which lead the hero astray and distract him and his followers from the true path."—Douglas Palmer, New Scientist

"Alvarez's book recounts this scientific detective story in an authoritative yet consistently engaging manner. Once considered absurd, the idea that extraterrestrial factors were involved in some of the great crises in the history of life has become widely accepted."—Hans-Dieter Sues, Toronto Globe and Mail

"A nicely told and well-written tale of scientific discovery."—Library Journal

"Appealing and accessible, an excellent introduction to the subject."—Kirkus Review

"Reading Alvarez's book is a bit like reading a letter from an old friend you haven't seen for 30 years. . . . Serious passages are offset by cheeky commentary and humble asides that keep the book from becoming overly solemn or preachy."—Rachel Berstein, Berkeley Science Review

"If you love mysteries and enjoy science, this is a wonderful book to read."—Wildlife Activist

"This is the story of one of the greatest adventures of twentieth-century science, told by the central figure. Walter Alvarez relates the still-evolving story with insight, clarity, and warmth. It is a great read for both scientist and layperson."—Richard Muller, author of Nemesis: The Death Star