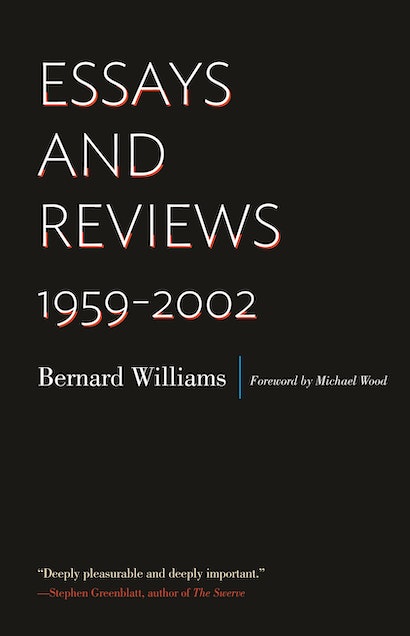 Bernard Williams was one of the most important philosophers of the past fifty years, but he was also a distinguished critic and essayist with an elegant style and a rare ability to communicate complex ideas to a wide public. This is the first collection of Williams’s popular essays and reviews. Williams writes about a broad range of subjects, from philosophy to science, the humanities, economics, feminism, and pornography.

Included are reviews of major books such as John Rawls’s Theory of Justice, Richard Rorty’s Consequences of Pragmatism, and Martha Nussbaum’s Therapy of Desire. But many of these essays extend beyond philosophy, providing an intellectual tour through the past half century, from C. S. Lewis to Noam Chomsky. No matter the subject, readers see a first-class mind grappling with landmark books in “real time,” before critical consensus had formed and ossified.

Bernard Williams held Chairs of Moral Philosophy at Cambridge, Berkeley, and Oxford. He died in 2003.

"[A]ffords a different, and especially advantageous, perspective from which to consider the animating ideas of Williams's humanism."—Joel Isaac, Times Literary Supplement

"[A] dazzling intellectual feast. . . . Williams's quickness, insight and wit are no surprise. More surprising, perhaps, is his rare capacity for intellectual empathy. Even more valuable are the non-review essays, which address the role of philosophy, and the humanities more generally, in human life, making a powerful case for their indispensability."—Martha Nussbaum, Times Literary Supplement

"[Williams'] essays accommodate the world and the reader, and unlike the world, give one confidence and delight in good argument."—Geoffrey Hawthorn, London Review of Books

"[A] stimulating read for anyone who cares about the condition of the world. With characteristic clarity, insight, and humor, the author tackles a wide range of topics as diverse as philosophy, religion, science, the humanities, and pornography."—Wan Lixin, Shanghai Daily

"This rigorous collection of essays and reviews reveals the brilliant and critical mind of Bernard Williams. . . . In these reviews and essays Williams achieves something that philosophy always promises but seldom delivers: a view from the perspective of reason, on a cultural landscape where reason is only one of the landmarks."—Roger Scruton, Telegraph

"Illuminating and instructive essays and reviews. This is a book which should inspire readers to go and read—or perhaps reread—Williams's other works."—Alasdair Palmer, Standpoint

"The titles that Williams reviewed read from a who's who of late 20th century philosophy. His reviews of Rawls' Theory of Justice and Nozick's Anarchy, State and Utopia are relevant today, thirty years after they were written. . . . Reading short reviews of these classic philosophical volumes in such a clear, accessible tone is a great pleasure, and the editors of this volume should be congratulated for making them available in this format."—Robert Robinson, San Francisco Book Review

"[A]n excellent new collection. . . . The essays can be savored piecemeal but are more powerful in number. To flip through them is to flip through the past forty years of our intellectual history by way of its seminal texts."—Walker Mimms, New Criterion

"The work of forty-three busy years, the essays in this volume attest to both what analytic philosophy has to gain from the humanities, and what the humanities have to gain from philosophy. Entirely free of kitsch or easy comfort, they leave us with the cumulative impression of a lifetime of truthfulness prosecuted with wit, subtlety, and stylishness."—Nakul Krishna, Cambridge Humanities Review

"For anybody wishing to undertake philosophy as a humanistic discipline, this collection of essays is an excellent place to start. But it will take many years to get up to speed, and the task will never be finished. Not for the first time, I am left wishing that Williams, who died in 2003, could have had another decade to show what a lifetime of learning can achieve."—Paul Sagar, Oxonian Review

"Posthumously published essays and reviews often feel like stale leftovers, but Bernard Williams was such a good philosopher and writer that his remain fresh and delicious. This collection gives not only a marvelous record of intellectual milestones across 43 years, but also a sense of immediacy."—Jane O'Grady, Times Higher Education

"I cannot recommend this volume highly enough to anyone interested in what the humanities have to offer."—Constantine Sandis, Times Higher Education

"[A] showcase of the philosopher's distinctive acumen and wit."—Adam Ferner, Philosophers' Magazine

"This is a wide-ranging, erudite book, which provides a fascinating insight into the intellectual output of the past six decades: in doing so, it tells us a bit about who we are, and what we think."—Jake Wojtowicz, Ethical Theory and Moral Practice

"The writing is lively and clear, the thought unfailingly charitable and insightful, and the form and substance of the essays are proof that Bernard Williams was one of the most important philosophers of the second half of the twentieth century. . . . Throughout these essays and interventions Williams proves himself the philosopher every philosopher should aspire to be."—Jeff Noonan, European Legacy

"This collection is the work of an exceptional thinker—an insightful philosopher who was also an acute observer of the world. Williams has a virtually unerring eye for the specious, for the concealed premise, and for overblown rhetoric, which he brings to light with a mordant wit, tinged at times with a wry sympathy for his target."—Charles Taylor, McGill University

"Bernard Williams lit up philosophy; teaching us what it is, what it has been, and what it might become. In these essays, he takes a stand on the major intellectual currents of his time. With his characteristic clarity, insight, and humor, Williams is here the philosopher-witness, offering us a penetrating view of an age."—Jonathan Lear, University of Chicago

"'How clean a smell he has managed to leave behind!' George Orwell wrote of Gandhi. The same could be said of Bernard Williams, and with the same touch of wonder. Great minds—and Williams stood at the pinnacle of intellectual distinction—often veer into positions that come to seem, with the passage of time, extravagant, self-indulgent, or cruel. But Williams's acute intelligence—high-spirited, supple, and wide-ranging—was unfailingly in the service of decency, clarity, and an ethical life rooted not in abstract principles but in the tangled circumstances of the everyday. These elegant, witty essays and reviews, still astonishingly alive, are at once deeply pleasurable and deeply important."—Stephen Greenblatt, author of The Swerve

"One of the foremost twentieth-century philosophers, Bernard Williams was also an acute critic of contemporary thought and letters. This well-chosen collection of essays and reviews is packed with arguments and insights, ranging across topics as diverse as the logic of abortion and whether the idea of God has any meaning. Richly enjoyable as well as consistently illuminating, this will be a feast of ideas for all who care about the intellectual condition of the culture."—John Gray, professor emeritus, London School of Economics

"These essays represent philosophical, intellectual, and social commentary at its very best. But what will be most valued by many different kinds of reader is the perfectly clear, agreeable, plain-speaking tone of the writing, and the unpretentious wisdom with which Bernard Williams addresses such a variety of subjects."—Barry Stroud, University of California, Berkeley