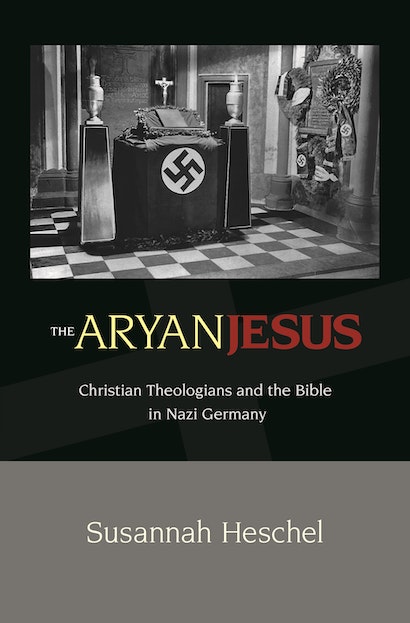 Was Jesus a Nazi? During the Third Reich, German Protestant theologians, motivated by racism and tapping into traditional Christian anti-Semitism, redefined Jesus as an Aryan and Christianity as a religion at war with Judaism. In 1939, these theologians established the Institute for the Study and Eradication of Jewish Influence on German Religious Life. In The Aryan Jesus, Susannah Heschel shows that during the Third Reich, the Institute became the most important propaganda organ of German Protestantism, exerting a widespread influence and producing a nazified Christianity that placed anti-Semitism at its theological center.


Based on years of archival research, The Aryan Jesus examines the membership and activities of this controversial theological organization. With headquarters in Eisenach, the Institute sponsored propaganda conferences throughout the Nazi Reich and published books defaming Judaism, including a dejudaized version of the New Testament and a catechism proclaiming Jesus as the savior of the Aryans. Institute members — professors of theology, bishops, and pastors — viewed their efforts as a vital support for Hitler’s war against the Jews. Heschel looks in particular at Walter Grundmann, the Institute’s director and a professor of the New Testament at the University of Jena. Grundmann and his colleagues formed a community of like-minded Nazi Christians who remained active and continued to support each other in Germany’s postwar years.

The Aryan Jesus raises vital questions about Christianity’s recent past and the ambivalent place of Judaism in Christian thought.

Susannah Heschel is the Eli Black Professor of Jewish Studies at Dartmouth College. She is the author of Abraham Geiger and the Jewish Jesus and the editor of Moral Grandeur and Spiritual Audacity: Essays of Abraham Joshua Heschel.

"Heschel has a remarkable story to tell. Her reliance on primary sources and her objectivity are impressive. One comes away from her account wondering how such apparently intelligent and learned Christian scholars could have been so foolish and craven."—Daniel J. Harrington, America

"The Aryan Jesus . . . is more than a heartbreaking story of principled Christian anti-Judaism. It is also a masterwork of patient archival research. . . . As a history of German anti-Semitism and as an analysis of pronounced themes within Christian theology, Heschel's study is both broad and deep."—Paula Fredriksen, Tablet

"Heschel's book will rank as an important work of intellectual history, one that provides a penetrating analysis of the mind-set of the institute and its supporters in the ranks of the German Christians."—Mark E. Ruff, Catholic Historical Review

"Susannah Heschel traces the evolution of the Institute and its various projects with great skill. . . . As an exercise in archival research it scores very highly. The detail is astonishing, and many intriguing points are made about both the origins of Nazism's Christian manifestations and the consequences of learned theologians spouting nonsense in Forties Thuringia."—Catholic Herald

"Heschel tells the story of the Institute for the Study and Eradication of Jewish Influence on German Church Life, showing how politics, theology, racial ideology, and political ambition shaped Nazi-era theological scholarship at one research institute. . . . This well-researched, theologically sensitive book is an important history of a troubling, shameful chapter in Christian history and will be a very important addition for most collections."—A.W. Klink, Choice

"Susannah Heschel's research is exemplary: she has followed up the careers of many theologians who took part in the attempt to rewrite Christianity. She has command over her subject without overstressing her Jewish sympathies; and this often shocking book is of considerable historical interest."—Margaret Pawley, Church Times

"Heschel's fascinating account begins not with the Third Reich but in the middle of the 19th century, when the intellectual foundation was laid for a German Christianity without roots in Judaism."—Jewish Book World

"Some may resist reading another book on the Holocaust. Reacting to the title, they may even presume that its findings would be obvious and that examining its contents is unnecessary. That would be a mistake—with regard to the general attitude about the Holocaust and how it relates to Christian identity, as well as to any misplaced assumptions linked to the phrase Aryan Jesus."—Henry Knight, Christian Century

"Carefully researched, tightly written, this is an important contribution to the study of Christianity in Nazi Germany. . . . This is a book that deserves our attention—whether we are biblical scholars, contextual theologians or church historians."—Anthony Egan, Studia Historiae Ecclesiasticae

"Heschel's work is beautifully written and densely packed with countless examples of the ways in which the institute's theologians used their own anti-Judaic theology to support the regime's antisemitic policies, to which they lent considerable support. . . . The book will be essential reading for all scholars of the Third Reich and the role of religion in the National Socialist state."—Beth A. Griech-Polelle, H-Net Reviews

"Heschel's Aryan Jesus is a probing and profoundly disturbing work. Its provocative conclusions invite further research into Christian anti-Semitism, Christian responses to the Holocaust, and the influence of ideology on historical Jesus studies. The text is enhanced by an extensive bibliography and illustrations of Nazi Christian art and architecture. Historians, Scripture scholars, clergy, seminarians, and advanced undergraduates will profit greatly from this outstanding study."—Peter A. Huff, Anglican Theological Review

"Every good book should provoke and The Aryan Jesus does not disappoint. Heschel's book should spark debate, which no doubt will center on her depiction of the Confessing Church. . . . Heschel's mixture of meticulous scholarship and intellectual provocation will hopefully be read widely and, thus, stimulate more discussion of complicity and false martyrdom."—Kevin Ostoyich, German Studies Review

"Original, compelling, and deeply disturbing, this book also dispels several ingrained post-1945 West German myths. . . . [T]he account raises pressing questions concerning the difference between Catholic and Protestant theology and church history with regard to race and the history of the study of Judaism after the war."—Amos Morris-Reich, Journal of Religion

"Heschel's long-anticipated contribution to this historiography is a work that is not only of immense importance and insight empirically but also one that attempts analytically and conceptually to break away from prior narratives."—Richard Steigmann-Gall, American Historical Review

"The Aryan Jesus is a worthy, indeed essential addition to [the] body of scholarship. Heschel has written a dense and multifaceted study."—Christopher R. Browning, Studies in Contemporary Jewry

"Aryan Jesus is not only a clear demonstration of the Christian legitimization of the Nazi Holocaust, but also a provocative entrance into the current debates about the relationship of Nazism and Christianity and the identification of Nazism as a political religion."—Kyle T. Jantzen, Journal of Church History

"In addition to her contributions to Jewish-Christian dialogue, Heschel provides important insights into the collaboration of the professions during the Third Reich. Indirectly, her work also has much to add to the emerging discussion on the religious inflection of German nationalism."—Shelley Baranowski, The Historian

"Historian Susannah Heschel was 'the first American, the first Jew, and the first person with a laptop' to enter the Institute's archives at Eisenach. She did not emerge empty-handed."—Leslie Jones, Quarterly Review

"[T]his is a valuable, sobering contribution to historical scholarship regarding the role of the German church during the Holocaust. The story it tells can serve as a warning for all who value the integrity of the church and its message."—Darrell Jodock, Lutheran Quarterly

"The book is impressive both in the richness of the archival work reflected in its pages and in the new light it sheds on the careers of Institute members both during the Third Reich and in the post-war era. . . . Heschel has provided an engrossing and enlightening book that appreciably enhances our understanding of the anti-Judaic and anti-semitic work of the German Christian movement within the Protestant church during the Third Reich."—Christopher Probst, Patterns of Prejudice

"The Aryan Jesus certainly is [Heschel's] chef d'oeuvre to date. . . . The book helps us better to understand the religious dimension of National Socialism and that era in Germany. We should be grateful to Susannah Heschel for bringing this story to us with such comprehensiveness, integrity, and power."—Kevin Madigan, Journal of the American Academy of Religion

"Susannah Heschel's The Aryan Jesus is a brilliant and erudite investigation of the convergence between major trends in German Protestantism and Nazi racial anti-Semitism. By concentrating on the history of the Institute for the Study and Eradication of Jewish Influence on German Religious Life, Heschel describes in forceful detail the Nazification of all aspects of Protestant theology, including the Aryanization of Jesus himself. This is a highly original and important contribution to our understanding of the Third Reich."—Saul Friedlander, University of California, Los Angeles

"Susannah Heschel's fascinating, well-documented study not only reveals how and why German theologians during the Nazi period sought to dejudaize the church; it also exposes a perverted exegesis and theology that is still found, tragically, in pulpit, pew, and classroom."—Amy-Jill Levine, author of The Misunderstood Jew: The Church and the Scandal of the Jewish Jesus

"Based on mostly unknown archival material, this pathbreaking book digs deep into the most sensitive areas of Nazi Germany's treatment of the Jews. There can be no doubt that The Aryan Jesus will raise discussion and controversy, and receive a lot of attention."—Michael Brenner, University of Munich

"Widely relevant, The Aryan Jesus is an erudite and thoughtful book based on a massive amount of work and a staggering amount of research. Heschel's sound scholarship makes a valuable and significant contribution to religion and theology, as well as history. This is an important book with a strong—even urgent—sense of purpose."—Doris L. Bergen, University of Toronto