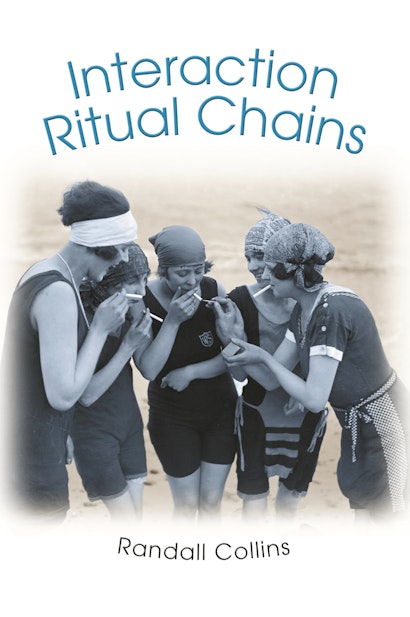 Sex, smoking, and social stratification are three very different social phenomena. And yet, argues sociologist Randall Collins, they and much else in our social lives are driven by a common force: interaction rituals. Interaction Ritual Chains is a major work of sociological theory that attempts to develop a “radical microsociology.” It proposes that successful rituals create symbols of group membership and pump up individuals with emotional energy, while failed rituals drain emotional energy. Each person flows from situation to situation, drawn to those interactions where their cultural capital gives them the best emotional energy payoff. Thinking, too, can be explained by the internalization of conversations within the flow of situations; individual selves are thoroughly and continually social, constructed from the outside in.


The first half of Interaction Ritual Chains is based on the classic analyses of Durkheim, Mead, and Goffman and draws on micro-sociological research on conversation, bodily rhythms, emotions, and intellectual creativity. The second half discusses how such activities as sex, smoking, and social stratification are shaped by interaction ritual chains. For example, the book addresses the emotional and symbolic nature of sexual exchanges of all sorts — from hand-holding to masturbation to sexual relationships with prostitutes — while describing the interaction rituals they involve. This book will appeal not only to psychologists, sociologists, and anthropologists, but to those in fields as diverse as human sexuality, religious studies, and literary theory.

Randall Collins is Professor of Sociology at the University of Pennsylvania. He is the author of eleven books, including The Sociology of Philosophies: A Global Theory of Intellectual Change, Four Sociological Traditions, and The Credential Society.

"Collins again demonstrates why he is considered one of the leading social theorists. This . . . work of Collins, in particular, transcends the boundaries of sociology. . . . This is an outstanding work for theoretically oriented professional and advanced students in sociology, social psychology, and psychology."—Choice

"Collins argues in this pathbreaking book that ritual—whether in face-to-face conversations or at national presidential funerals—is the key sociological factor that ties group structure and collective beliefs together. . . . Collins plows new ground in several ways. First, he argues that ritual is the central category for all sociological analysis because ritual connects and mediates group structure and beliefs. . . . Second, his work breaks new paths because it proposes a comprehensive theory of ritual grounded in everyday solutions. . . . Finally, Collins bushwhacks new paths when he emphasizes the importance of the emotional energy, what he calls 'collective effervescence,' that is generated by ritual."—Donald B. Kraybill, Christian Century

"Collins's book is a major contribution to contemporary sociological theory. His approach—a genuinely sociological microfoundation of sociology—is well chosen and carefully carried out . . . Interaction ritual theory helps to enrich our knowledge about a core process of social life. Interaction Ritual Chains is a book offering rich insights into this core process."—Richard Münch, American Journal of Sociology

"Interaction Ritual Chains is a major statement by a major scholar at the top of his game. Starting with a parsimonious set of insights gleaned from the best current work in microsociology, the author builds a compelling theory of how these insights can inform models of the behavior of families, communities, organizations, and nation-states. The book will measurably shape the way that social scientists approach the business of understanding and explaining human behavior."—Paul DiMaggio, Princeton University

"This book elaborates an original, bold theory about fundamental social processes that is likely to generate considerable debate among social scientists. It is also the most important statement of one of sociology's most distinguished theorists. Collins' contribution will be seminal not only because it brings to the fore the often neglected emotional dimension of social life, but also because it pushes further our understanding of group boundaries in the production of social inequality. It will become a must for all social scientists, including those who will disagree."—Michèle Lamont, Professor of Sociology, Harvard University, and author of The Dignity of Working Men