The politics surrounding exchange rate policies in the global economy 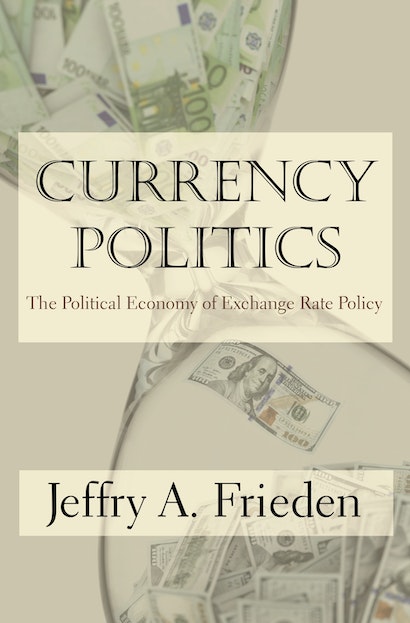 The exchange rate is the most important price in any economy, since it affects all other prices. Exchange rates are set, either directly or indirectly, by government policy. Exchange rates are also central to the global economy, for they profoundly influence all international economic activity. Despite the critical role of exchange rate policy, there are few definitive explanations of why governments choose the currency policies they do. Filled with in-depth cases and examples, Currency Politics presents a comprehensive analysis of the politics surrounding exchange rates.

Identifying the motivations for currency policy preferences on the part of industries seeking to influence politicians, Jeffry Frieden shows how each industry’s characteristics—including its exposure to currency risk and the price effects of exchange rate movements—determine those preferences. Frieden evaluates the accuracy of his theoretical arguments in a variety of historical and geographical settings: he looks at the politics of the gold standard, particularly in the United States, and he examines the political economy of European monetary integration. He also analyzes the politics of Latin American currency policy over the past forty years, and focuses on the daunting currency crises that have frequently debilitated Latin American nations, including Mexico, Argentina, and Brazil.

With an ambitious mix of narrative and statistical investigation, Currency Politics clarifies the political and economic determinants of exchange rate policies.

Jeffry A. Frieden is professor of Government at Harvard University and the author of many books, including Debt, Development, and Democracy (Princeton).

"In Currency Politics, a quarter century of scholarly rumination has been distilled in one definitive treatment. . . . His attention to detail is remarkable, and wherever the data permit, he backs his qualitative discussion with solid quantitative analysis. . . . Readers unfamiliar with any of these episodes will find the treatment enlightening, even fascinating."—Benjamin J. Cohen, Journal of Economic Literature

"A considered and compelling case for the relevance of political economy to explaining currency policy. . . . Explains monetary economics with such clarity that it is unusually accessible. . . . Think of it as occupying the middle ground between pop economics titles, like Freakonomics, and more formidable volumes, such as Thomas Piketty's Capital in the Twenty-First Century."—Jenny McArthur, LSE Review of Books

"Even though written clearly, this book is a challenging read; it surprises readers with sudden enlightenment on profound concepts like the impossible trinity, substitution and income effects of currency, the Mundell-Fleming-Dornush Framework, the Dornush overshooting model, and the optimum currency area theory, among others. As the author relates these concepts to historical events, the reader is compelled to continue reading the book until its conclusion."—Shishir Shakya, Review of Regional Studies

"This is international political economy as it should be. Frieden presents a sturdy framework that shows why various interest groups ought to favor strong or weak currencies, and stable or flexible exchange rates. His book's convincing applications of this framework range from sectional politics in nineteenth-century America, to today's eurozone divisions, to the vicissitudes of emerging markets."—Jeffrey Frankel, Harvard University

"In Currency Politics, Frieden not only draws together beautifully the strands of his previous work, but he advances a new and entirely persuasive explanation of the euro project as an essential bulwark against competitive devaluations. Above all, he argues convincingly for the centrality of exchange rate policy to domestic politics, international relations, and macroeconomics in open economies."—Ronald Rogowski, University of California, Los Angeles

"This excellent book is for anyone who has ever wondered about the origins of the Eurozone, the causes of the currency crises, and the importance of the classical gold standard. Frieden combines lively historical narratives with statistical analyses to show that currency politics are pretty much the same across time and space. No other author could bring out the common threads running through the book's cases so clearly." —J. Lawrence Broz, University of San Diego

"Currency Politics is an ambitious book on an important topic. Frieden is one of the best political economists and one of the best scholars writing on this subject."—Sebastian Edwards, University of California, Los Angeles and author of Toxic Aid

"An authoritative treatment of the political economy of exchange rates by the leading international political economist specializing in this subject."—Barry Eichengreen, University of California, Berkeley