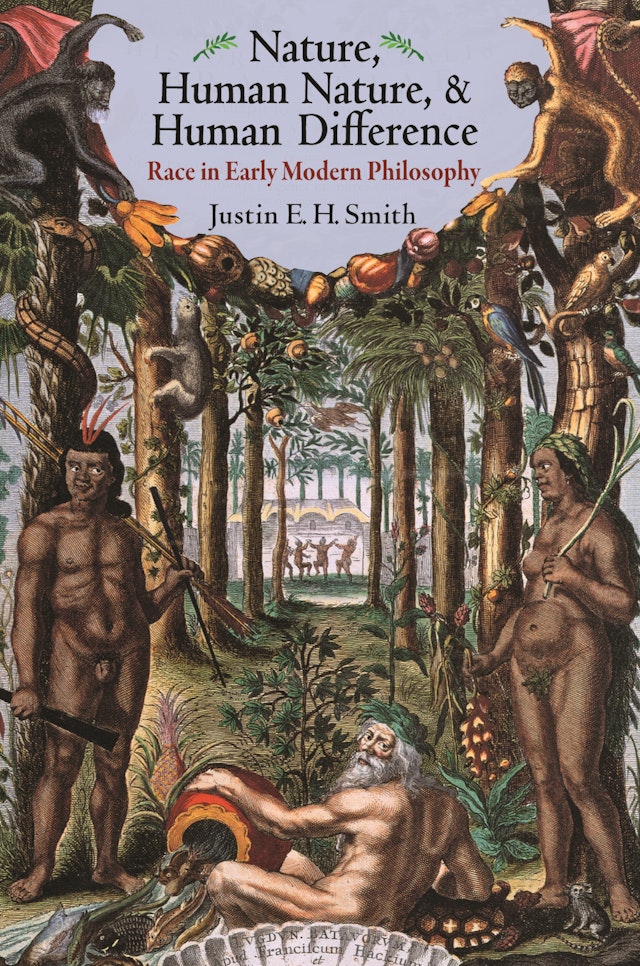 People have always been xenophobic, but an explicit philosophical and scientific view of human racial difference only began to emerge during the modern period. Why and how did this happen? Surveying a range of philosophical and natural-scientific texts, dating from the Spanish Renaissance to the German Enlightenment, Nature, Human Nature, and Human Difference charts the evolution of the modern concept of race and shows that natural philosophy, particularly efforts to taxonomize and to order nature, played a crucial role.

Smith demonstrates how the denial of moral equality between Europeans and non-Europeans resulted from converging philosophical and scientific developments, including a declining belief in human nature’s universality and the rise of biological classification. The racial typing of human beings grew from the need to understand humanity within an all-encompassing system of nature, alongside plants, minerals, primates, and other animals. While racial difference as seen through science did not arise in order to justify the enslavement of people, it became a rationalization and buttress for the practices of trans-Atlantic slavery. From the work of François Bernier to G. W. Leibniz, Immanuel Kant, and others, Smith delves into philosophy’s part in the legacy and damages of modern racism.

With a broad narrative stretching over two centuries, Nature, Human Nature, and Human Difference takes a critical historical look at how the racial categories that we divide ourselves into came into being.

Justin E. H. Smith is university professor of the history and philosophy of science at the Université Paris Diderot—Paris VII. He is the author of Divine Machines: Leibniz and the Sciences of Life (Princeton), coeditor and cotranslator of The Leibniz-Stahl Controversy, and a regular contributor to the New York Times and other publications.

"In this innovative, thought-provoking book, Smith (history and philosophy of science, Université Paris Diderot, Paris 7) looks at the construction and evolution, in natural science and anthropology, of 17th- and 18th-century modern views of racial difference—views that led to racial typing, racial profiling, prejudice, and implicit bias. . . . This is a valuable book for those interested in philosophy, sociology, cultural studies and multiculturalism, the history of race, and the history of natural science and anthropology."—Choice

"It is a study that I would recommend for all those interested in developing a better understanding of the origins of ideas about human diversity and race in modern thought."—John Solomos, Renaissance Quarterly

"A sophisticated history . . . [and] an important contribution to the pressing task of understanding and remedying our seemingly intractable color prejudice. . . . [Smith's] discussion is profound and absorbing throughout."—Bernard Boxill, Journal of the History of Philosophy

"Smith's survey of the race concept in the early modern period is original, provocative, and stimulating all at once, balancing a sharp awareness of the enormous damage that the idea of racial divisions has had and an appreciation of how the concept relates to advances in our understanding of humanity’s place in the natural world. His study is a powerful demonstration of the role history can play in raising ethical awareness of such dangerous and tenacious concepts as race."—Devin Vartija, Isis

"Combining philosophical and historical analysis and a mine of research, this book documents the evolution of the race construct in the seventeenth and eighteenth centuries. At a time when the philosophy of race is vigorously reinventing itself, Justin Smith provides readers with an insightful foray into the modern European mindset constructing non-European otherness."—Koffi N. Maglo, University of Cincinnati

"Charting the discourse on human race in early modern philosophy, this book makes important contributions to the history and philosophy of race—a subject that continues to haunt contemporary debates. Smith covers an exceedingly complex terrain of disparate ideas and arguments, stretching across centuries and a wide range of national contexts. This is a valuable, thought-provoking, and innovative addition to the literature."—Staffan Müller-Wille, University of Exeter