A collection of detective stories using math to solve crimes 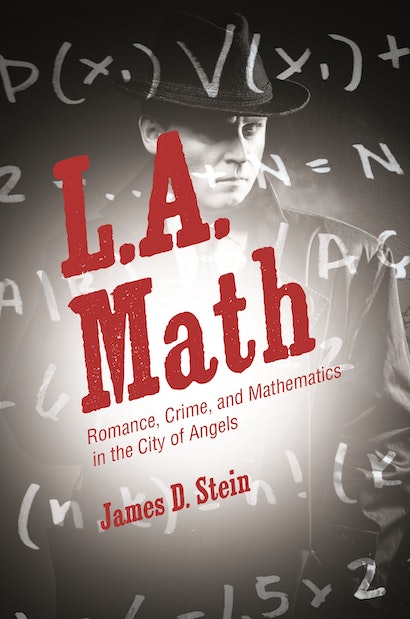 Move over, Sherlock and Watson—the detective duo to be reckoned with. In the entertaining short-story collection L.A. Math, freelance investigator Freddy Carmichael and his sidekick, Pete Lennox, show how math smarts can crack even the most perplexing cases. Freddy meets colorful personalities throughout Los Angeles and encounters mysterious circumstances from embezzlement and robbery to murder. In each story, Freddy’s deductive instincts—and Pete’s trusty math skills—solve the crime.

Featuring such glamorous locales as Beverly Hills, Brentwood, Malibu, and Santa Barbara, the fourteen short stories in L.A. Math take Freddy and Pete through various puzzles and challenges. In “A Change of Scene,” Freddy has to figure out who is selling corporate secrets to a competitor—so he uses mathematical logic to uncover the culprit. In “The Winning Streak,” conditional probability turns the tables on an unscrupulous bookie. And in “Message from a Corpse,” the murderer of a wealthy widow is revealed through the rules of compound interest. It’s everything you expect from the City of Angels—A-listers and wannabes, lovers and lawyers, heroes and villains. Readers will not only be entertained, but also gain practical mathematics knowledge, ranging from percentages and probability to set theory, statistics, and the mathematics of elections. For those who want to delve into mathematical subjects further, the book includes a supplementary section with more material.

Filled with intriguing stories, L.A. Math is a treat for lovers of romance, crime, or mathematics.

James D. Stein is emeritus professor in the Department of Mathematics at California State University, Long Beach. His books include Cosmic Numbers (Basic) and How Math Explains the World (Smithsonian).

"Fun for any crime-fiction lover who fancies a spot of mathematical adventuring, or vice versa."—Brian Clegg, Popular Science

"James D Stein . . . explains in the preface to the book that entertaining stories set in Los Angeles, with mathematics squeezed painlessly in, was his long cherished dream of a way to teach basic math as fun rather than a chore . . . a book to teach math to non-science students at university."—S. Ananthanarayanan, The Statesman

"If you liked the Numb3rs TV show: L.A. Math: Romance, Crime, and Mathematics in the City of Angels by James D. Stein."—John Allen Paulos, author of, A Numerate Life

"With tight and engaging plots, the stories in LA Math are neatly written and just the right length to read in around 15 minutes."—Dominic Lenton, Engineering & Technology

"I've always wanted to find a book that combines genuinely readable short stories with insights into math or science—in L.A. Math, James Stein pulls this off remarkably well. It's as if Ellery Queen, with the help of P. G. Wodehouse, spiced up a collection of detective tales with a generous handful of practical mathematics."—Brian Clegg, author of A Brief History of Infinity and Dice World

"In this fun collection of short stories, Stein's enthusiasm for mysteries that combine sleuthing and mathematics shines through. The math examples used in the stories are excellent and the topics progress naturally. By the end, readers not only have a good understanding of mathematical thinking but also how math can happen around them every day."—Bruce Rothschild, professor emeritus of mathematics, University of California, Los Angeles

"James Stein covers a remarkable range of important mathematical methods and concepts—all by telling stories in Los Angeles. His book makes difficult ideas easy and is an original and highly accessible way of learning more about a vital subject."—Ian Stewart, author of Professor Stewart's Casebook of Mathematical Mysteries

"L.A. Math could be described as the spirit of Encyclopedia Brown merged with the solving of imaginative math problems. James Stein recasts mathematical and logical conundrums in a series of delightful vignettes between Freddy, a freelance detective new to Los Angeles, and his landlord, Pete, who has a surprising ability to use math to solve Freddy's cases. A wonderful book."—Lance Fortnow, author of The Golden Ticket

"With L.A. Math, James Stein has written a fun collection of short stories whose mysteries are resolved through classical mathematical conundrums. A unique book that is suitably entertaining both in and out of the classroom."—Arthur Benjamin, author of The Magic of Math

"I love this book. With attention to scene and character, L.A. Math weaves together the detective genre with mathematics in entertaining and enjoyable ways."—Oscar Fernandez, author of Everyday Calculus