A deeply personal look at death, mourning, and the afterlife in Jewish tradition 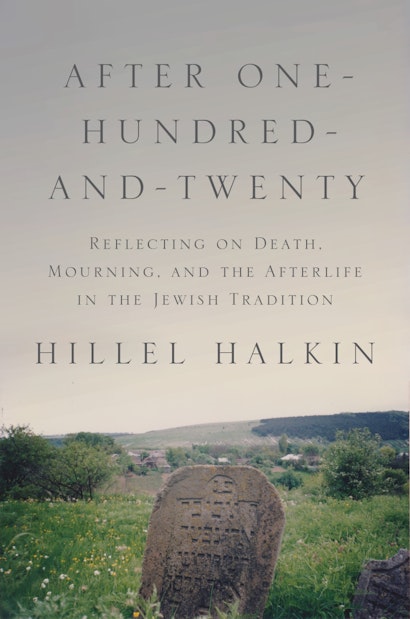 After One-Hundred-and-Twenty provides a richly nuanced and deeply personal look at Jewish attitudes and practices regarding death, mourning, and the afterlife as they have existed and evolved from biblical times to today. Taking its title from the Hebrew and Yiddish blessing to live to a ripe old age—Moses is said to have been 120 years old when he died—the book explores how the Bible’s original reticence about an afterlife gave way to views about personal judgment and reward after death, the resurrection of the body, and even reincarnation. It examines Talmudic perspectives on grief, burial, and the afterlife, shows how Jewish approaches to death changed in the Middle Ages with thinkers like Maimonides and in the mystical writings of the Zohar, and delves into such things as the origins of the custom of reciting Kaddish for the deceased and beliefs about encountering the dead in visions and dreams.

After One-Hundred-and-Twenty is also Hillel Halkin’s eloquent and disarmingly candid reflection on his own mortality, the deaths of those he has known and loved, and the comfort he has and has not derived from Jewish tradition.

Hillel Halkin is an author, translator, critic, and journalist. His books include Jabotinsky: A Life and Yehuda Halevi, which won the National Jewish Book Award.

"It's refreshing to read a Jewish book on death that does not presume to offer guidance, either through that dark portal, or around it. Instead, Hillel Halkin . . . has written a brief, pellucid account of the role death has played in Jewish texts, law, thought and lives—including his own."—Esther Schor, Wall Street Journal

"Halkin combines an accessible and trenchant exploration of Judaism's evolving concepts of death with his own struggle with understanding it. He leavens what could be a depressing read with humor. . . . Halkin's frankness about his own difficulties . . . help make this nuanced quest for meaning personal and affecting."—Publishers Weekly

"A very user-friendly historical account of Jewish ideas about death . . . and how those ideas change. . . . [Halkin] is a master at 'popularisation' in the best sense of that term, bringing to a non-academic audience what are, in essence, some very complicated ideas."—David Hillel-Ruben, Jewish Chronicle

"Hillel Halkin, an American-born Israeli scholar and novelist, poignantly explores his own experiences while providing a history of Jewish thought."—Amy Frykholm, Christian Century

"Instructive and thought-provoking. . . . One would be hard-pressed to find a more knowledgeable or astute guide through the vast literature of Jewish thanatology than Hillel Halkin. . . . The Biggest of Mysteries being tackled by one of our best and brightest."—Matt Nesvisky, Jerusalem Post

"At once scholarly and passionate, secular and religious, detached and autobiographical."—Edward Alexander, Chicago Jewish Star

"In this important new book, Hillel Halkin explores Jewish attitudes towards death and the world to come. . . . A highly readable book which provokes reflection on an often uncomfortable subject. It would prove a valuable resource for all those involved in the field of pastoral care."—Randall C. Belinfante, Association of Jewish Libraries Reviews

"Hillel Halkin is an uncommon and essential figure in Jewish intellectual life—a man at home in the entirety of the tradition and its languages, a secularist fascinated by religion, a scholar in the thick of the world, a critic with an insatiable appetite for exploration. All his writing is informed by a princely pride, wholly justified, in the resources of Jewish literature for the understanding of human existence. After One-Hundred-and-Twenty—this lively, even scintillating book about the passing of life—generously displays all of Halkin's virtues. It will enlighten its mortal readers, and even help them."—Leon Wieseltier

"This is a most remarkable and beautifully written book. Halkin elegantly weaves together illuminating scholarly examinations of various Jewish ideas about death, mourning, and the afterlife with his own wonderfully honest, humane, and deeply moving personal reflections on these subjects and on his own mortality. After One-Hundred-and-Twenty is in a class by itself."—Leon R. Kass, author of The Beginning of Wisdom: Reading Genesis

"Hillel Halkin displays an impressive mastery of source material and writes with his customary flair and grace."—Allan Nadler, Drew University, author of The Faith of the Mithnagdim: Rabbinic Responses to Hasidic Rapture