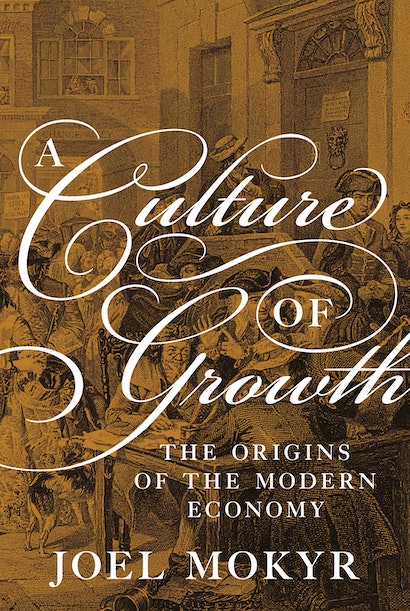 During the late eighteenth century, innovations in Europe triggered the Industrial Revolution and the sustained economic progress that spread across the globe. While much has been made of the details of the Industrial Revolution, what remains a mystery is why it took place at all. Why did this revolution begin in the West and not elsewhere, and why did it continue, leading to today’s unprecedented prosperity? In this groundbreaking book, celebrated economic historian Joel Mokyr argues that a culture of growth specific to early modern Europe and the European Enlightenment laid the foundations for the scientific advances and pioneering inventions that would instigate explosive technological and economic development. Bringing together economics, the history of science and technology, and models of cultural evolution, Mokyr demonstrates that culture—the beliefs, values, and preferences in society that are capable of changing behavior—was a deciding factor in societal transformations.

Mokyr looks at the period 1500–1700 to show that a politically fragmented Europe fostered a competitive “market for ideas” and a willingness to investigate the secrets of nature. At the same time, a transnational community of brilliant thinkers known as the “Republic of Letters” freely circulated and distributed ideas and writings. This political fragmentation and the supportive intellectual environment explain how the Industrial Revolution happened in Europe but not China, despite similar levels of technology and intellectual activity. In Europe, heterodox and creative thinkers could find sanctuary in other countries and spread their thinking across borders. In contrast, China’s version of the Enlightenment remained controlled by the ruling elite.

Combining ideas from economics and cultural evolution, A Culture of Growth provides startling reasons for why the foundations of our modern economy were laid in the mere two centuries between Columbus and Newton.

Joel Mokyr is the Robert H. Strotz Professor of Arts and Sciences and professor of economics and history at Northwestern University and Sackler Professor at the Eitan Berglas School of Economics at the University of Tel Aviv. His many books include The Enlightened Economy and The Gifts of Athena (Princeton). He is the recipient of the Heineken Prize for History and the International Balzan Prize for Economic History.

"Fascinating.... [Mokyr] reminds us that the skirmishing of philosophers and their ideas, the preoccupation of popular historians, is in many ways a sideshow—that the revolution that gave Europe dominance was, above all, scientific, and that the scientific revolution was, above all, an artisanal revolution."—Adam Gopnik, New Yorker

"A fine book. . . . One of our country's great economic historians has helped us better understand the greatest transformation in human welfare our planet has ever seen."—Richard Vedder, Wall Street Journal

"Ultimately, without the impetus of science, economic growth would have fizzled out after 1815. A Culture of Growth is certainly making me rethink."—Brad DeLong, Nature

"A Culture of Growth is a brilliant book. You should buy it and even read it. It’s long, but consistently interesting, even witty."—Deirdre McCloskey, Prospect

"In pointing to growth-boosting factors that go beyond either the state or the market, Mokyr's book is very welcome."—Victoria Bateman, Times Higher Education

"Mokyr . . . dives into the mystery of how the world went from being poor to being so rich in just a few centuries. . . . Drawing on centuries of philosophy and scientific advancements, Mokyr argues that there's a reason the Industrial Revolution occurred in Europe and not, for example, in China, which had in previous centuries shown signs of more scientific advancement: Europe developed a unique culture of competitive scientific and intellectual advancement that was unprecedented and not at all predestined."—Ana Swanson, WashingtonPost.com's Wonkblog

"The sheer elegance of Mr. Mokyr's theory . . . has much to commend it. And it is refreshing that an economist is taking seriously the idea that ideas and culture make a difference to economic growth."—The Economist

"Mokyr has written a book to read slowly and chew over thoroughly. . . . He is a wonderfully well-read lucid and continuously interesting guide to a vast literature and invariably thought provoking."—Alan Ryan, Literary Review

"Someone needed to write a book like this, and there could have been no better author to do so than Mokyr."—Peer Vries, Foreign Affairs

"Economic historian Joel Mokyr has written a capstone work on the dynamics of the industrial revolution."—Arnold Kling, Econlib

"It is not often that a book leaves me gasping in admiration for the breadth and depth of an author's reading and knowledge, but this one did."—Ted Nield, Geoscientist Online

"This book is the latest example of Mokyr's ability to explicate complex issues, illustrating his big-picture thesis with a myriad of fascinating details. He writes with clarity—enjoyable for the general reader as well as for the specialist in economic history. A Culture of Growth is a must-read for anyone interested in how Western society got where it is today and what this implies for the spread of technology in the global economy of the future."—Finance & Development

"A Culture of Growth is a book of immense importance for us Indians especially when we are getting comfortable, forever playing victim to the depredations of British imperialism instead of wholeheartedly focusing on beating the West at its game as the Chinese are doing. . . . Well worth tackling."—Uday Balakrishnan, Hindu Business Line

"A Culture of Growth is an insightful quest into the economic history of the last five centuries. Mokyr’s historical laboratory is early modern Europe, when a small mass of highly skilled artisans, entrepreneurs, financiers and merchants laid the roots of what was to become the Industrial Revolution."—Progressive Post

"One has to admire the depth of knowledge and the subtlety of Mokyr’s argument. . . . For serious students of the Enlightenment itself, Mokyr’s magnum opus will be required reading for a long time to come."—Nicholas Crafts, History Today

"This is a tour d'horizon of an exciting new area of inquiry, which offers important insights into the future of our civilization and the evolution of an increasingly technical world. Mokyr's book is so rich and stimulating that no brief review can do it justice. So, dear reader, read the book!"—Wolfgang Kasper, Policy

"The book represents recognition that culture has finally arrived as an important and legitimate concept in discussions of economic growth. In this endeavor, the book is an important landmark. . . . Students and scholars working in the field will benefit from the intelligent and rich discussion provided in A Culture of Growth."—Mark Koyama, Independent Review

"What stands out from Mokyr’s approach is the highly contingent character of the Enlightenment and Industrial Revolution. They happened because a lot ofdifferent things happened to fall into place; small deviations in the course of events could have given us an entirely different world of technological and economic power."—Diane Coyle, Financial Times

"After reading this book, chances are that you won’t look at the economic, social, and political world in quite the same way as before."—Pierre Lemieux, Regulation

"An important body of work. It contains ideas, propositions, historical facts, biographies of influential scholars, writers and scientists, and it is a confirmation of the author's expertise of a broad range of topics in the economics of culture and comparative economic history of an emerging Europe and China."—Dr Meltem Ince-Yenilmez, Rest Journal

"Many great minds have written many great books about why Europe spearheaded technological progress and economic growth in the past three centuries. Joel Mokyr has joined their ranks with admirable verve, erudition, and originality. In his account, a change in the beliefs, values, and preferences of Europeans drove them to accumulate, share, and apply knowledge as it had never been done before. Agree or disagree with Mokyr's thesis, you definitely need to take it seriously."—Daron Acemoglu, coauthor of Why Nations Fail

"Mokyr's new masterpiece is a virtuoso display of how new thinking in economics can bring a deeper understanding of one of the most important events in human history. A Culture of Growth documents the cultural shifts that permitted the interrogation of nature that then flowered into scientific advances. This book offers us an optimistic vision: a great expansion of communication preceded our modern prosperity, and we can expect this to happen again."—Angus Deaton, 2015 Nobel Laureate in Economics

“In A Culture of Growth, Joel Mokyr explores in detail the interactions among groups of educated people that led to the creation of specific innovative ideas important in the Industrial Revolution. Mokyr’s historical laboratory is early modern Europe but his methods and findings seem to me equally useful in thinking about the prospects for a variety of contemporary economies the world over.”—Robert E. Lucas Jr., 1995 Nobel Laureate in Economics

"In this immensely learned book, Mokyr argues that a specific culture of growth anchored in the Republic of Letters, spread through the enlightened circuits beginning with Britain, and made the Industrial Revolution happen. Written by America's leading economic historian, A Culture of Growth is magisterial and long overdue."—Margaret Jacob, University of California, Los Angeles

"A giant among the masters of economic history, Mokyr has written a brilliant, persuasive, humane, penetrating, and sensationally good book. Mokyr looks at the immensely powerful idea of a progressive Baconian science, which stepped down from theory to enrich the modern world. The range of scholarship is astonishing and this major work will become a standard in the literature on economic growth."—Deirdre McCloskey, author of Bourgeois Equality