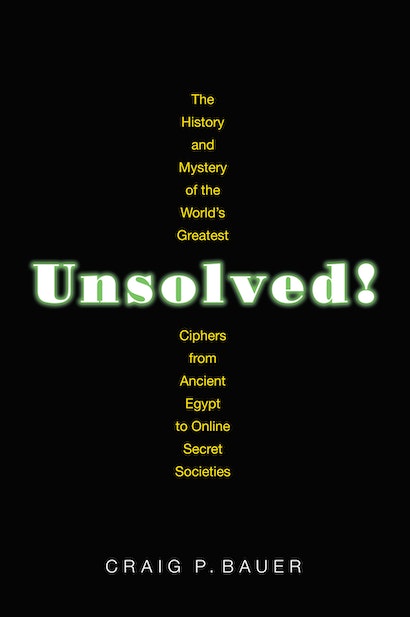 In 1953, a man was found dead from cyanide poisoning near the Philadelphia airport with a picture of a Nazi aircraft in his wallet. Taped to his abdomen was an enciphered message. In 1912, a book dealer named Wilfrid Voynich came into possession of an illuminated cipher manuscript once belonging to Emperor Rudolf II, who was obsessed with alchemy and the occult. Wartime codebreakers tried—and failed—to unlock the book’s secrets, and it remains an enigma to this day. In this lively and entertaining book, Craig Bauer examines these and other vexing ciphers yet to be cracked. Some may reveal the identity of a spy or serial killer, provide the location of buried treasure, or expose a secret society—while others may be elaborate hoaxes.

Unsolved! begins by explaining the basics of cryptology, and then explores the history behind an array of unsolved ciphers. It looks at ancient ciphers, ciphers created by artists and composers, ciphers left by killers and victims, Cold War ciphers, and many others. Some are infamous, like the ciphers in the Zodiac letters, while others were created purely as intellectual challenges by figures such as Nobel Prize–winning physicist Richard P. Feynman. Bauer lays out the evidence surrounding each cipher, describes the efforts of geniuses and eccentrics—in some cases both—to decipher it, and invites readers to try their hand at puzzles that have stymied so many others.

Unsolved! takes readers from the ancient world to the digital age, providing an amazing tour of many of history’s greatest unsolved ciphers.

Craig P. Bauer is professor of mathematics at York College of Pennsylvania. He is editor in chief of the journal Cryptologia, has served as a scholar in residence at the NSA's Center for Cryptologic History, and is the author of Secret History: The Story of Cryptology. He lives in York, Pennsylvania. 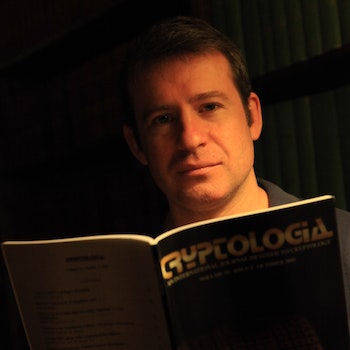 "Unsolved! spans a huge arc of time and space, from Julius Caesar's simple substitution cipher to composer Edward Elgar's 1897 Dorabella Cipher. . . . The book's combination of convincing logic and . . . speculation is a familiar mix to those of us interested in undeciphered writing."—Andrew Robinson, Nature

"Bauer proves an able and entertaining guide to the world of real-life ciphers, codes, and encryption in his fascinating book Unsolved! . . . Bauer caters to newcomers while keeping things interesting for experienced code breakers as well. . . . Unsolved! is suited to all who enjoy the thrill of the chase."—Peter Dabbene, Foreword Reviews

"The Da Vinci Code has nothing on this exhaustive collection of cryptographs and codes—because they are real. From a still-indecipherable 14th-century manuscript to spy communications to the infamous coded taunts of the Zodiac Killer, Bauer shows how experts try to crack the case."—Discover Magazine

"This chunky book proved to be an unexpected pleasure. . . . A thoroughly engaging read."—Brian Clegg, Popular Science

"Can you imagine: a book on cryptography that gets you hooked and keeps you reading like you would read a Dan Brown page turner. This is what Craig Bauer achieved with this book. . . . I am blown away by this book. I have never read a non-fiction book before that is so thrillingly entertaining."—Adhemar Bultheel, European Mathematical Society

"[Unsolved!] is filled with fascinating stories. . . . The book discusses, in a story-telling, informative style, a variety of ciphers spanning several millennia. . . . The author does not just summarize the history of these ciphers but also talks about possible solution methods and his own contributions to their investigations."—MAA Reviews

"With amazing thoroughness, wit and easy communication the author immerses the reader in the world of Cryptanalysis. Remember these are unsolved problems, and so each chapter is highly tantalizing as a series of brilliant minds each take a turn at tackling ciphers which in the end remain as enigmatic as their creators originally intended. . . .There is an almost conversational tone to the book in the way Bauer playfully interacts with the reader, in a way it's almost like he’s offering all the codebreakers out there the chance to collaborate, or at least take part in the debate."—Adventures in Historyland

"In his latest book, Craig P. Bauer . . . introduces the uninitiated reader to the fascinating world of cryptography. To make this even more interesting, his book features some of the most mysterious ciphers and codes in history, some of them which remain unsolved today. . . . Bauer, who has served as a scholar in residence at the NSA's Center for Cryptologic History, is a pretty good code-breaker himself. He shares some of his skills and knowledge by introducing the reader to some of the most common techniques and how to break them."—ZME Science

"This is a book of some impressive magnitude, both in terms of the time span that it covers (being millennia), as well as the ways in which it discusses the context and content of the ciphers, most of which, as the title suggests, are unsolved. . . . The writing of Unsolved! is really effortlessly flowing, and although the book is over 500 pages long, it is an easy one to devour as you get more and more wrapped up in each new mystery. I would highly recommend this book for anyone with an interest in suspense, crime, mathematics, history, law, computing or simply human nature. This is a really fun and very well written book."—Jonathan Shock, Mathemafrica

"To my knowledge, Unsolved! is the first comprehensive treatise of unsolved cipher mysteries written in English. . . . Craig Bauer's Unsolved! is both an entertaining and an informative read. It, like his Secret History, is a major contribution to the crypto history literature and a must-read for everybody interested in codebreaking."—Klaus Schmeh, Cryptologia

"A mind-bending joy of a book. Bauer investigates the mysteries of secret writing with a storyteller's eye and the latest technology, digging into spectacular and macabre tales of murderers, spies, Viking runestones, strange manuscripts, buried gold, and wireless messages from Mars. Unsolved! makes the world seem bigger, weirder, and more wonderful."—Jason Fagone, author of Ingenious: A True Story of Invention, Automotive Daring, and the Race to Revive America

"In this intriguing casebook of hidden clues and secret messages, Craig Bauer is the perfect guide to cracking ciphers."—Adrienne Mayor, author of The Amazons: Lives and Legends of Warrior Women across the Ancient World

"A connection between the cipher language of a fifteenth-century manuscript and the taunting enciphered messages of the twentieth-century Zodiac Killer seems unlikely. Yet in this well-chosen survey of unsolved cryptographic problems, we learn how these and a host of other cipher conundrums are related. Illuminating examples, clear technical explanations, and a brisk writing style combine to make Unsolved! an informative and rewarding read."—Glen Miranker, former Apple chief technology officer (hardware)

"A stunning journey through the mysteries of codes and ciphers! Excellent and outstanding!"—David Naccache, École normale supérieure, France

"A great book and a major contribution."—Klaus Schmeh, author of Cryptography and Public Key Infrastructure on the Internet

"Exceptional. Not only are these ciphers fascinating individually, but together they provide a comprehensive picture of the different methods and types of encryption, which Bauer explains and guides readers through in turn. I thoroughly enjoyed this book."—Todd S. Sauter, former docent at the National Cryptologic Museum

"A welcome addition to the growing popular literature on cryptology. Bauer explains concepts very clearly and illustrates them with examples, so that the book is self-contained and requires little prerequisite mathematical or cryptological background knowledge on the part of the reader."—John W. Dawson, Jr., author of Logical Dilemmas: The Life and Work of Kurt Gödel