Why leadership is key to ending political and corporate corruption globally 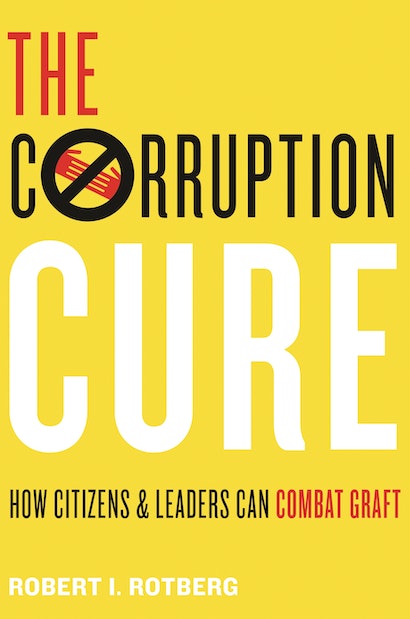 Corruption corrodes all facets of the world’s political and corporate life, yet until now there was no one book that explained how best to battle it. The Corruption Cure provides many of the required solutions and ranges widely across continents and diverse cultures—putting some thirty-five countries under an anticorruption microscope—to show exactly how to beat back the forces of sleaze and graft.

Robert Rotberg defines corruption theoretically and practically in its many forms, describes the available legal remedies, and examines how we know and measure corruption’s presence. He looks at successful and unsuccessful attempts to employ anticorruption investigative commissions to combat political theft and venal behavior. He explores how the globe’s least corrupt nations reached that exceptional goal. Another chapter discusses the role of civil society in limiting corruption. Expressed political will through determined leadership is a key factor in winning all of these battles. Rotberg analyzes the best-performing noncorrupt states to show how consummate leadership made a telling difference. He demonstrates precisely how determined leaders changed their wildly corrupt countries into paragons of virtue, and how leadership is making a significant difference in stimulating political anticorruption movements in places like India, Croatia, Honduras, and Lebanon. Rotberg looks at corporate corruption and how it can be checked, and also offers an innovative fourteen-step plan for nations that are ready to end corruption.

Curing rampant corruption globally requires strengthened political leadership and the willingness to remake national political cultures. Tougher laws and better prosecutions are not enough. This book enables us to rethink the problem completely—and solve it once and for all.

Robert I. Rotberg is founding director of the Program on Intrastate Conflict at the Harvard Kennedy School and president emeritus of the World Peace Foundation. His many books include Africa Emerges, Transformative Political Leadership, and When States Fail (Princeton). He is a fellow of the American Academy of Arts and Sciences and former president of Lafayette College.

"An exhaustive description of the current state of corruption. . . . The strength of [Rotberg's] book is its focus on change."—Paul Collier, Times Literary Supplement

"Corruption is ‘hardwired into the human condition,' begins the author. He brings together concepts supporting this statement from many sources, illustrating the challenge of identifying and controlling it. . . . This is a major contribution to the literature and should draw wide attention in many fields."—Choice

"As we renew the effort towards progress . . . we need a clear sense of where we have been. The Corruption Cure provides that sort of foundation, and will be a key starting-point for debates and actions to come."—Michael Johnston, International Affairs

"The Corruption Cure is a well-written, deeply researched prescription for change that could dramatically reduce corruption worldwide. Rotberg engages us with stories of leaders who rid their countries of corruption, stories that are grounded in specific measures that can be replicated. A must-read for policymakers, philanthropists, international business leaders, and the general public."—Jonathan Fanton, American Academy of Arts and Sciences

"A veritable tour de force, both intellectually and in scope. Rotberg is one of the most knowledgeable researchers in this field, and he also has impressive experience from practical efforts and policies for reducing corruption. I am convinced that The Corruption Cure will become a standard reference for a long time."—Bo Rothstein, author of The Quality of Government: Corruption, Social Trust, and Inequality in International Perspective

"The Corruption Cure reflects Rotberg's long-standing interest in the problems of promoting good governance and limiting corruption, and his wealth of personal experience from his many years of work in the field."—Susan Rose-Ackerman, author of Corruption and Government: Causes, Consequences, and Reform