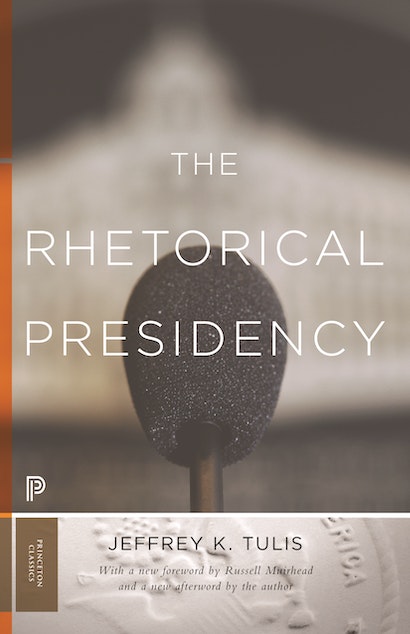 Modern presidents regularly appeal over the heads of Congress to the people at large to generate support for public policies. The Rhetorical Presidency makes the case that this development, born at the outset of the twentieth century, is the product of conscious political choices that fundamentally transformed the presidency and the meaning of American governance. Now with a new foreword by Russell Muirhead and a new afterword by the author, this landmark work probes political pathologies and analyzes the dilemmas of presidential statecraft. Extending a tradition of American political writing that begins with The Federalist and continues with Woodrow Wilson’s Congressional Government, The Rhetorical Presidency remains a pivotal work in its field.

Jeffrey K. Tulis teaches in the Department of Government at the University of Texas at Austin. His books include Legacies of Losing in American Politics. Russell Muirhead is the Robert Clements Professor of Democracy and Politics at Dartmouth College.

"[The] canonical book on the history of presidential rhetoric."—Christopher Baylor, Washington Post

"Over the past few years the conceptual foundations of presidential studies have been recast. Jeffrey Tulis's The Rhetorical Presidency stands . . . as one of the benchmarks of the new formulation. . . . [A] formidable piece of scholarship."—Stephen Skowronek, The Review of Politics

"The Rhetorical Presidency is one of the two or three most important and perceptive works written by a political scientist in the twentieth century, and it is the one that may help the most to explain the pathological aspects of modern politics—not only in the United States but in all social democracies."—Jeffrey Friedman, Critical Review

"In this outstanding work Tulis elegantly portrays the increased use of rhetoric by 20th-century presidents, portraying the negative effects of the 'rhetorical Presidency.' Presidents of the 19th century were seldom seen or heard by the public, a comportment intended by the founders who feared the excitation of the masses by demagogic leaders. Theodore Roosevelt changed the practice, and Woodrow Wilson provided the rationale for speaking 'the common meaning of the common voice.' The drawbacks of this behavior include an increasing lack of 'fit' between the office and its occupant, a greater mutability of policy by rhetorical persuasion, the erosion of careful deliberation, and the decay of political discourse. This is an exemplary work of mutually supportive normative argument and empirical investigation. Tulis's quantitative analysis is motivated by concern for the health of the American republic, not by a banal attempt to be 'scientific.' The work is a must for all undergraduate libraries."—S.E. Schier, Choice

"Writing in 1988, I argued that The Rhetorical Presidency was right in all its essentials, and beseeched political scientists to center future presidential studies on its perceptive interpretations and practical insights. Now, some two decades and one White House experience later, I must revise that assessment. Upward, that is . . . The Rhetorical Presidency has proven to be even better as political development crystal ball than it was as a rear view mirror."—John J. DiIulio, Critical Review

"The best book on this subject."—Walter Berns, Wall Street Journal

"Jeffrey Tulis's book The Rhetorical Presidency has experienced a scholarly reception enjoyed by few other works in presidency studies. Ten years after its 1987 publication, it was the subject of at least two retrospective edited volumes (Ellis 1998; Medhurst 1996). Ten years later, Critical Review published a 20-year retrospective on the work, with another edited volume plumbing the nuances of the book's thesis following (Friedman 2007; Medhurst 2008)."—David Crockett, Presidential Studies Quarterly

"This is a brilliant book. The author does not overlap with the existing literature as much as offer an entirely new way of thinking about the phenomenon he describes. The book should draw respectful attention in a variety of disciplines—history, philosophy, and communications, as well as political science. . . . I could go on and on; there is no end to my appreciation for this work."—Michael Nelson, Vanderbilt University

"This book is full of good writing, sound judgment, and the exactly appropriate rhetoric for an analysis of the rhetorical presidency. Everyone is aware of references to the presidency as a bully pulpit and to presidents as great (or poor) communicators. But it takes a book like Tulis's to put all this together as an essential, perhaps the essential, political dimension of the presidency."—Theodore J. Lowi, Cornell University

Praise for the previous edition: "Making an image for presidents today is a sham rhetoric that must be judged within the history of presidential rhetoric since the Founding. In this brilliant and original work, Jeffrey Tulis finds a new aspect of the presidency and rediscovers a forgotten topic in political science."—Harvey C. Mansfield, Harvard University