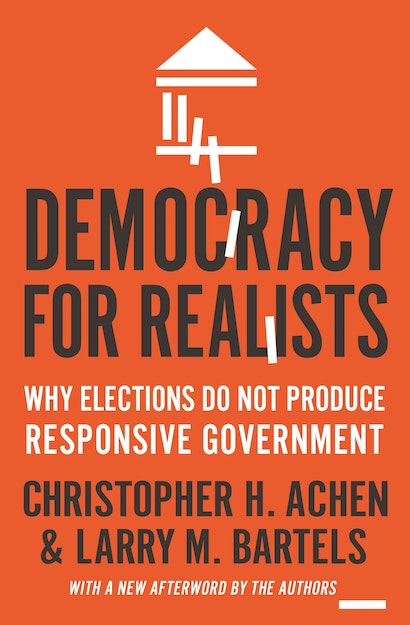 Achen and Bartels argue that democratic theory needs to be founded on identity groups and political parties, not on the preferences of individual voters. Now with new analysis of the 2016 elections, Democracy for Realists provides a powerful challenge to conventional thinking, pointing the way toward a fundamentally different understanding of the realities and potential of democratic government.

"It flies in the face of decades of political science conventional wisdom about ‘the rational voter' and other such dicta, but it seems to me obviously true, particularly in our age."—Michael Tomasky, New York Review of Books

"The most influential recent book on voting."—John Prideaux, The Economist

"Democracy for Realists, which [I've] become a bit obsessed with . . . Is the political science equivalent of being told Santa doesn’t exist."—Ezra Klein, Vox

"In Democracy for Realists, Achen and Bartels explain that deep-seated social identities and group affiliations motivate political action far more than individual rationality does. They convincingly debunk what they term the ‘folk theory' of electoral democracy, an idealized view in which informed voters assess candidates on the basis of their own policy preferences or ideology and the leaders they elect then respond to the wishes of the majority, producing public policies that meet voters’ demands. Drawing on a vast literature, Achen and Bartels argue that, in fact, most people are uninterested in politics and poorly informed about issues."—Suzanne Mettler, Foreign Affairs

"[Achen and Bartels] do an especially fine job with their analyses of retrospective voting and identity politics, making a noteworthy contribution to the theory of voting behavior, and their book would be a good choice for undergraduate or graduate courses as an introduction to the political science literature on voting behavior."—Tim Cox, Independent Review