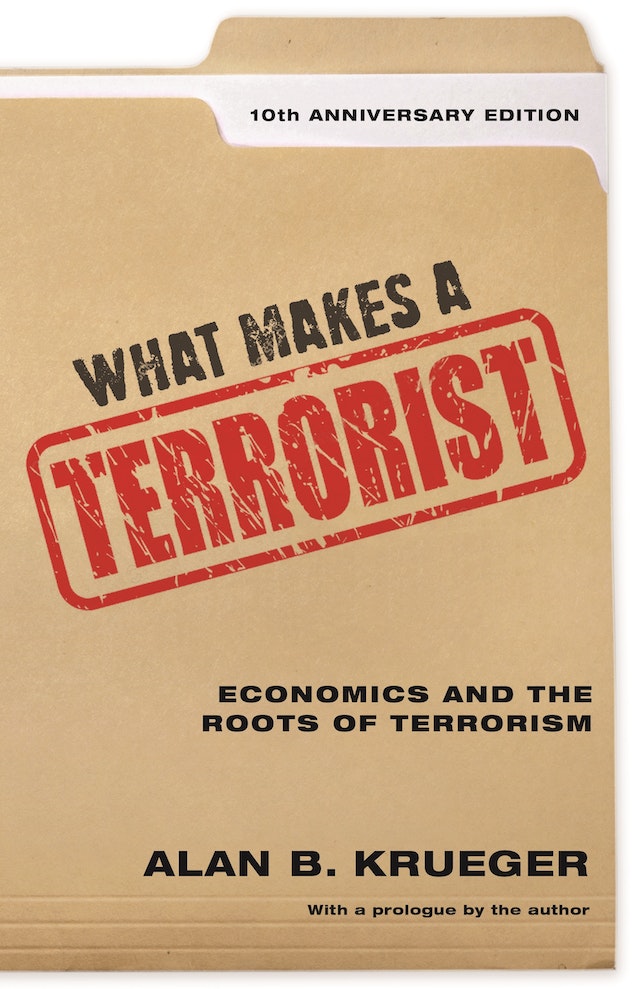 If we are to correctly assess the root causes of terrorism and successfully address the threat, we must think more like economists do. Alan Krueger’s What Makes a Terrorist, explains why our tactics in the fight against terrorism must be based on more than anecdote, intuition, and speculation.

Many popular ideas about terrorists are fueled by falsehoods, misinformation, and fearmongering. Many believe that poverty and lack of education breed terrorism, despite a wealth of evidence showing that most terrorists come from middle-class and often college-educated backgrounds. Krueger closely examines the factors that motivate individuals to participate in terrorism, drawing inferences from terrorists’ own backgrounds and the economic, social, religious, and political environments in the societies from which they come. He describes which countries are the most likely breeding grounds for terrorists, and which ones are most likely to be their targets. Krueger addresses the economic and psychological consequences of terrorism and puts the threat squarely into perspective, revealing how our nation’s sizable economy is diverse and resilient enough to withstand the comparatively limited effects of most terrorist strikes. He also calls on the media to be more responsible in reporting on terrorism.

Bringing needed clarity to one of the greatest challenges of our generation, this 10th anniversary edition of What Makes a Terrorist features a new introduction by the author that discusses the lessons learned in the past decade from the rise of ISIS and events like the 2016 Pulse nightclub attack in Orlando, Florida.

Alan B. Krueger is the Bendheim Professor of Economics and Public Affairs at Princeton University, former chairman of President Barack Obama’s Council of Economic Advisers, and an adviser to the National Counterterrorism Center. He is the coauthor of Myth and Measurement: The New Economics of the Minimum Wage (Princeton) and Inequality in America. He lives in Princeton, New Jersey.

"What are the individual and societal causes of terrorism? The book's great strength is its focus on new sources of data examined in new ways. The most compelling analysis in the book is of biographical information on operatives from Hezbollah and Hamas. This is a substantial contribution, offering insight into who becomes a terrorist and, as important, pushing terrorism studies in a productive new direction, toward microlevel data. The book provides a valuable service in dispelling the stereotype of the poor, ignorant terrorist."—Ethan Bueno de Mesquita, Science

"It seems universally obvious that poverty and poor education breed terrorism. But it's wrong. . . . [Alan Krueger] went in search of evidence for the terrorism part of the proposition and found next to none. He has set out his findings in What Makes A Terrorist."—Peter Martin, Canberra Times

"[Krueger] seeks to put the risks Americans face from terrorism into 'proper perspective' with his unique book."—John McCaslin, Washington Times

"What Makes a Terrorist brings together disparate data, such as academic studies and government reports, arraying them into a concise, accessible argument against the notion that we can defeat terrorism through aid and education. While Krueger is careful to affirm that these are useful in combating many social ills, he is adamant that terrorism is not one of them. He offers skilled analysis to show that an aggressive foreign policy based on this fallacious assumption has cost several nations dearly and also warns that continuing along this course may provoke further terrorist acts."—Tony Azios, Christian Science Monitor

"Using raw data from government, academic, and think-tank sources and citing the work of other economists on poverty, race, terrorism, and hate crimes, Krueger explains in clear and accessible prose that the average terrorist suspect is highly educated, professionally employed, from a middle- or higher-class background, and, most important, from a country that suppresses civil liberties.. . . Avoiding jargon whenever possible and defining it when unavoidable, Krueger excels in making his difficult subject easy to grasp without reducing its inherent complexity. The occasional pop culture reference (e.g., to the Daily Show) adds to the appeal. Highly recommended for both academic and public collections."—April Younglove, Library Journal

"What makes a terrorist? Are the drivers primarily political or economic? Princeton economist Alan Krueger has made a great study of this question...What Makes a Terrorist lacks a question mark. That's because Krueger, marshaling persuasive statistics and analysis, comes down firmly on the side of politics, noting most terrorists are middle-class and well-educated."—Thomas P.M. Barnett, Knoxville News Sentinel

"An invaluable little book. . . . What Makes a Terrorist uses standard tools of economics and statistical analysis to get at the truth about terrorism. . . . Krueger finds one familiar fact in all his numbers. Countries with fewer civil liberties tend to produce more terrorists."—Daniel Finkelstein, Times

"Krueger's book is a necessary read for anyone who wishes to understand terrorism, especially because many of the popular notions of what causes it are not rooted in reality. One wishes that politicians, especially, would pay attention."—Amit Varma, Live Mint

"[Krueger] in his groundbreaking new book, What Makes a Terrorist, enlists the 'dismal science' to tackle the despicable one. Provocative, dispassionate and accessible, Krueger's book is a breath of fresh air in the stifling climate of empty speculation that dominates the terror dialogue in post-9/11 America."—Ryan Hagen, Brooklyn Rail

"To challenge the widespread view that terrorism is caused by economic deprivation and lack of education, Krueger redirects thinking about terrorism by raising three provocative questions that can be answered by scrutiny of evidence from an economic perspective. . . . Krueger shows how complex the data and issues are, the dangers of moving from correlation to cause—and how to think clearly and courageously about politically motivated violence."—L.J. Alderink, Choice

"I am quite sure that this book will be very widely read; it builds on recent literature by both Krueger and a young breed of scholars who have used technical sophistication to disprove the expected positive effect of poverty and ignorance on terrorism."—Siddhartha Mitra, Eastern Economic Journal

"Praise for What Makes a Terrorist: "In this beautifully written book, one of the world's most respected economists tackles the question of terrorism. Krueger's work represents the most careful data-driven research ever done in this area. This is a book that a lay audience will read and enjoy, but with a rigor and depth that will inform the experts in the field. This is timely and important work which should play a critical role in shaping our public policies on terrorism."—Steven D. Levitt, coauthor of, Freakonomics

"Praise for What Makes a Terrorist: "Alan Krueger . . . has done pathbreaking research on why so many terrorists come from middle-class backgrounds."—David Leonhardt, New York Times

"Praise for What Makes a Terrorist: "Economist Alan Krueger . . . explores this phenomenon with a systematic study of the evidence. . . . All in all, the research that Krueger gathers together suggests that if there is a link between poverty, education and terrorism, it is the opposite of the one popularly assumed."—Tim Harford, Financial Times

"Praise for What Makes a Terrorist: "An invaluable little book. . . . [U]ses standard tools of economics and statistical analysis to get at the truth about terrorism."—Daniel Finkelstein, Times

"Praise for What Makes a Terrorist: "This book is a model of how academics can contribute to major public policy debates."—Lawrence D. Freedman, Foreign Affairs

"This is a very important book. Krueger proves—with facts, figures, and interviews—that terrorists are not desperately poor killers but well-educated politicians using violence to draw attention to their 'market'—violent change. The way you beat them—as we did in Peru—is not with bigger guns but with better ideas and legal reforms that win over their largest constituency, the poor."—Hernando de Soto, author of The Mystery of Capital: Why Capitalism Triumphs in the West and Fails Everywhere Else

"Professor Krueger's well-researched analysis is exactly the kind of resource the country needs in order to make wise decisions in the war on terror. His extensive data and insightful commentary go to the heart of the causes and consequences of terrorism, with often startling conclusions. A fascinating tour de force, this book will assist scholars and policymakers alike."—Raphael Perl, senior terrorism policy analyst, Congressional Research Service

"This is a book that even George Bush could understand. The United States would be more effective in combating terrorism if the president and his advisors embraced Alan Krueger's fine work. When the history of the 'war on terror' is written, Krueger will be one of the few cited for having taken the time to wrestle with facts and data rather than pander to racist prejudice and fear mongering."—Larry Johnson, CEO of BERG Associates and former CIA counterterrorism official

"These three lectures on terrorism are, despite the gruesomeness of the topic, a delight to read. Who else but Krueger could juxtapose negative binomial regressions and cuts from Comedy Central in a natural way? This book provides clear state-of-the-art answers to fundamental questions about terrorism in a manner that is broadly accessible."—David Laitin, Stanford University