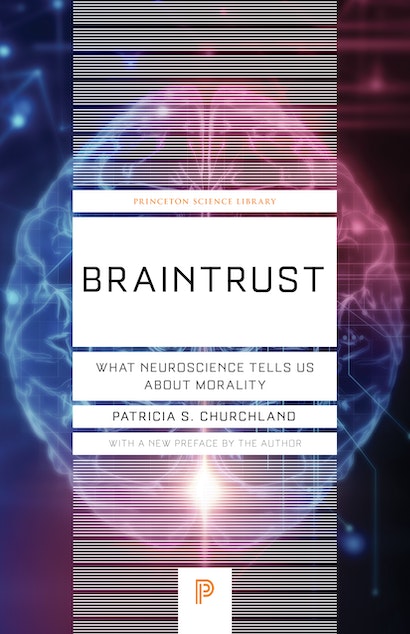 What is morality? Where does it come from? And why do most of us heed its call most of the time? In Braintrust, neurophilosophy pioneer Patricia Churchland argues that morality originates in the biology of the brain. She describes the “neurobiological platform of bonding” that, modified by evolutionary pressures and cultural values, has led to human styles of moral behavior. The result is a provocative genealogy of morals that asks us to reevaluate the priority given to religion, absolute rules, and pure reason in accounting for the basis of morality.

Moral values, Churchland argues, are rooted in a behavior common to all mammals—the caring for offspring. The evolved structure, processes, and chemistry of the brain incline humans to strive not only for self-preservation but for the well-being of allied selves—first offspring, then mates, kin, and so on, in wider and wider “caring” circles. Separation and exclusion cause pain, and the company of loved ones causes pleasure; responding to feelings of social pain and pleasure, brains adjust their circuitry to local customs. In this way, caring is apportioned, conscience molded, and moral intuitions instilled. A key part of the story is oxytocin, an ancient body-and-brain molecule that, by decreasing the stress response, allows humans to develop the trust in one another necessary for the development of close-knit ties, social institutions, and morality.

A major new account of what really makes us moral, Braintrust challenges us to reconsider the origins of some of our most cherished values.

Patricia S. Churchland is professor emerita of philosophy at the University of California, San Diego, and an adjunct professor at the Salk Institute. Her books include Brain-Wise and Neurophilosophy. 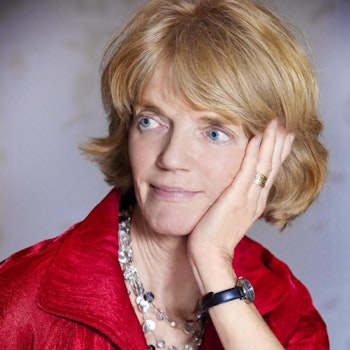 "[Patricia Churchland] finds that morality is all about empathy. . . . Churchland is also 'biological' about morality, seeing it as an adaptation that our brains have evolved in order to cement social ties. With a series of examples, she rejects the idea that morality is a set of rules and codes handed down from on high, without which we would all behave badley."—Matt Ridley, Wall Street Journal

"Churchland's discussion puts . . . areas of research prone to over-interpretation into much-needed perspective. . . . In my view, by illuminating the biological foundations on which caring, cooperation and social understanding are based, and by arguing against simplistic views about innateness and divine ordination, Churchland has delineated the conceptual space still to be navigated concerning which actions are morally right, how we come to those decisions, and how we justify them."—Adina L. Roskies, Nature

"Intriguing. . . . The puzzle that concerns [Churchland] above all is whether morality can be explained or justified by science."—Margaret A. Boden, Times Higher Education

"Churchland's superbly written, dense-with-thinking book is fiercely alert to what can and cannot justifiably be inferred from modern science. She is a brilliantly precise (and often slyly funny) demolisher of exaggerated claims."—Steven Poole, Guardian

"Churchland, by insisting that morality is neither an innate instinct nor an abstract system, but rather a tough, practical problem posed by our instincts, is bringing together the best in both neuroscientific and philosophical thinking."—Josh Rothman, Boston Globe's Brainiac blog

"What is morality? Where does it come from? According to neurophilosopher Patricia S. Churchland in her book Braintrust, morality originates in the brain. She argues that over time the human brain evolved to feel social pain and pleasure. As humans evolved to care about the wellbeing of others, they also developed a sense of morality."—Victoria Stern, Scientific American Mind

"Churchland guides the reader through lucid, well-articulated explanations of subjects like oxytocin's effect on an individual's hormonal makeup, brain changes over time, and relevant gene research, tying these neuroscientific elements together with more social science oriented areas like cooperation, trust, and rule creation. . . . In bringing together aspects of philosophy and neuroscience, Churchland presents a persuasive argument that morality is not shaped solely by religious or social forces but, instead, also draws on hormonal triggers, genes, and brain evolution. This influential work is likely to be a valuable resource for anyone seeking to gain a fresh, exciting perspective on an oft-discussed area of philosophy."—Elizabeth Millard, ForeWord Reviews

"I feel this will be an important book. In many ways it will probably complement The Moral Landscape because it deals clearly with some of the critiques made of Sam's approach. Particularly those made by scientists and non-religious philosophers. . . . [Churchland] is eminently qualified to cover the subject as a philosopher with a special interest in neuroscience. And the time is ripe for this sort of coverage."—Ken Perrott, Open Parachute

"The book is about: morality, fairness and the source of both. But don't expect tight definitions of either term, let alone a didactic treatise on human evolution. Instead, sit back and let Churchland run her ideas past you. She's so chatty you'll never guess the University of California, San Diego, philosopher is associated with a school of thought called eliminative materialism. (Don't ask. Even a philosopher friend was fuzzy on the details.) She's just plain interesting."—Leigh Dayton, Australian

"[Churchland] has been best known for her work on the nature of consciousness. But now, with a new book, Braintrust: What Neuroscience Tells Us about Morality, she is taking her perspective into fresh terrain: ethics. And the story she tells about morality is, as you'd expect, heavily biological, emphasizing the role of the peptide oxytocin, as well as related neurochemicals. . . . Hers is a bottom-up, biological story, but, in her telling, it also has implications for ethical theory. Morality turns out to be not a quest for overarching principles but rather a process and practice not very different from negotiating our way through day-to-day social life."—Christopher Shea, Chronicle Review

"The account of the nature and origins of morality that Churchland sketches here is thoroughly naturalistic and thoroughly grounded in the sciences. But it is also humanistic. . . . For [Churchland], although the capacities that make us moral are the products of evolution and can be explained in detail by neuroscience, the content of morality is very importantly the product of human culture."—Neil Levy, Philosopher's Magazine

"Makes a compelling case…. This smart, lucid and often entertaining book will give any curious mind a good overview of how the brain learns to distinguish right from wrong."—Ferris Jabr, New Scientist

"Churchland's eloquent prose offers a guided tour to recent work at the crossroads of neurology, cognitive psychology, genetics, and evolutionary biology, highlighting their rich, and occasionally surprising, implications for social phenomena. As such, the book will appeal not only to students but also to a wider audience who might be keen to attend to a reliable, constructive, scientifically grounded, and clearly unfolding narration about human life."—Anthony Hatzimoysis, Metascience

"Braintrust is a well written and informative book—its strength, and bulk, consists of the amalgamated empirical research on social behavior and Churchland's empirical speculation on the role of oxytocin in the evolution of morality and social decision-making."—Anton Petrenko, Philosophy in Review

"This empirically based, superbly argued text by Churchland undoubtedly will ruffle many feathers. . . . Churchland eloquently defends the naturalization of morality, inviting readers to reconsider such normatively significant notions as empathy, caring, and trust in light of new understandings of the role of oxytocin and other hormones, possibilities inherent in mirror neurons, and distinctions between various forms of psychopathy and normal behaviors. Additionally, she tackles head-on deeply rooted philosophical challenges that are motivated by the famous is-ought fallacy or embedded in more traditional moral theories such as consequentialism or deontology. Though Churchland's approach is cautious, it is convincing."—Choice

"Patricia Churchland opens a can of contemporary ethical conundrums with deftly explained and richly annotated neuro-physiological evidence. Braintrust is a welcome addition to the interdisciplinary literature bridging the chasm said to exist between 'is and ought,' epitomized by the Natural Fallacy."—Stanley Shostak, European Legacy

"Clearly written and pleasant to read, Braintrust is recommended for all readers who are interested in the relevance that the behavioral sciences might have in shedding light on human morality and in the way in which morality is culturally and historically molded to satisfy our everyday needs."—Daniele Macuglia, Quarterly Review of Biology

"Researchers interested in cooperation, moral psychology, and empirically-informed metaethics could happily and rewardingly immerse themselves in Braintrust."—Benjamin James Fraser, Biology and Philosophy

"This is a terrific, clear, and finely sensitive account of human moral and social behavior and its neurobiological—and decidedly secular—underpinnings. Patricia Churchland once again leads the way."—Michael S. Gazzaniga, author of Human: The Science Behind What Makes Your Brain Unique

"Few areas of science are as relevant for the future of humanity as the science of morality, and few scholars are as prepared to comment on its current status as Patricia Churchland. She has exactly the right background to carve out an original approach to the problem, and the skills needed to lead the reader to solid new facts while being merciless with exaggerated claims and sloppy thinking. Braintrust is vintage Churchland, only better."—Antonio Damasio, author of Descartes's Error

"In its search for the origins of morality, this book deftly balances philosophical questions and an understanding of how the brain actually works. It is a rare combination, and extremely fruitful. Churchland roots morality firmly in the social emotions rather than in some abstract principles, yet shows us how and why these principles nevertheless emerge."—Frans de Waal, author of Our Inner Ape and The Age of Empathy

"Churchland takes us on a thrilling journey from molecules to morals. We learn how brain chemicals implicated in orgasms also underlie ethics. But Churchland resists biological reductionism—along with the rigid rules of religion and philosophy—and compellingly argues that morality is culturally crafted to meet the demands of human life."—Jesse Prinz, author of Beyond Human Nature: How Culture and Experience Shape the Human Mind

"This superb book is the ideal answer to those who doubt that neuroscience, experimental psychology, and behavioral studies of nonhuman animals can ever tell us anything valuable about human morality. Written with elegance, subtlety, and deep learning lightly worn, this is one of those rare books that will enlighten and fascinate novices and experts alike."—Paul Seabright, author of The Company of Strangers: A Natural History of Economic Life

"Braintrust is a tour de force, a take-no-prisoners deconstruction of the fictions of ethics based on pure reason or intuition, and a sustained defense of what, at our best, we are already doing—using our brains to flourish in complex social and natural ecologies."—Owen Flanagan, author of The Really Hard Problem: Meaning in a Material World

"This is a groundbreaking contribution to our understanding of how morality is related to our biology and evolution. It is also a unique and valuable bridge between neuroscience and philosophy."—Ralph J. Greenspan, Kavli Institute for Brain and Mind, University of California, San Diego

"With a series of examples, [Churchland] rejects the idea that morality is a set of rules and codes handed down from on high, without which we would all behave badly."―Matt Ridley,Wall Street Journal