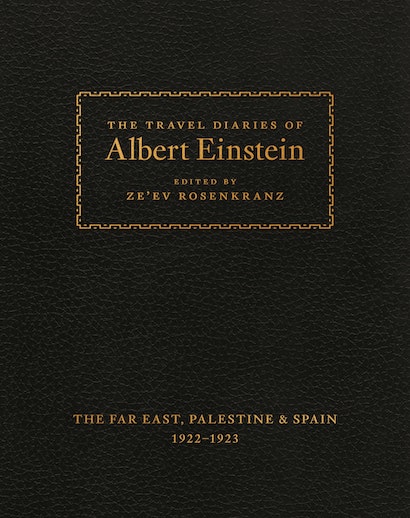 In the fall of 1922, Albert Einstein, along with his then-wife, Elsa Einstein, embarked on a five-and-a-half-month voyage to the Far East and Middle East, regions that the renowned physicist had never visited before. Einstein’s lengthy itinerary consisted of stops in Hong Kong and Singapore, two brief stays in China, a six-week whirlwind lecture tour of Japan, a twelve-day tour of Palestine, and a three-week visit to Spain. This handsome edition makes available, for the first time, the complete journal that Einstein kept on this momentous journey.

The telegraphic-style diary entries — quirky, succinct, and at times irreverent—record Einstein’s musings on science, philosophy, art, and politics, as well as his immediate impressions and broader thoughts on such events as his inaugural lecture at the future site of the Hebrew University in Jerusalem, a garden party hosted by the Japanese Empress, an audience with the King of Spain, and meetings with other prominent colleagues and statesmen. Entries also contain passages that reveal Einstein’s stereotyping of members of various nations and raise questions about his attitudes on race. This beautiful edition features stunning facsimiles of the diary’s pages, accompanied by an English translation, an extensive historical introduction, numerous illustrations, and annotations. Supplementary materials include letters, postcards, speeches, and articles, a map of the voyage, a chronology, a bibliography, and an index.

Einstein would go on to keep a journal for all succeeding trips abroad, and this first volume of his travel diaries offers an initial, intimate glimpse into a brilliant mind encountering the great, wide world.

Ze'ev Rosenkranz is senior editor and assistant director of the Einstein Papers Project at the California Institute of Technology. Previously, he was the Bern Dibner Curator of the Albert Einstein Archives at the Hebrew University in Jerusalem. He is the author of Einstein Before Israel (Princeton) and The Einstein Scrapbook.

"The Travel Diaries is a substantially revised version of the 2012 translation that comes with an illuminating introduction and astonishingly comprehensive end-notes by Ze’ev Rosenkranz. . . . Anyone interested in Einstein’s complex, sometimes self-contradictory, character will be enjoyably provoked by reading his piquant Travel Diaries."—Andrew Robinson, Science

"An eye-opening collection of travel diaries from the legendary scientist and thinker."—Kirkus Reviews

"The handwritten diary shows Einstein in an unfamiliar light, as a tourist—in the real, earthbound sense, not (as in his famous thought experiment) riding a light beam through space-time. Never intended for publication, it records his thoughts and impressions as they occurred, unmediated and unfiltered by considerations of how they would affect his image."—Jerry Adler, Smithsonian

"Few know of Einstein’s writings on travel. . . . That shortcoming may now be remedied with the publication of a fascinating narrative of his first main travels outside of Europe."—Michael Curtis, New English Review

"[Rosenkranz] has prepared a luxuriously enriched edition with a thoughtful introduction and extensive notes for the wider audience."—David Bodanis, Literary Review

"In this travel journal, clearly written for his eyes only, we see [Einstein] at his most human, capable of making boorish, unthinking and even racist remarks. Indeed, it shows that Einstein was first and foremost a brilliant scientist and that though he undoubtedly had an unequalled insight into the laws of physics, his understanding of human nature and of other cultures was far from profound. It seems that even a genius is, in the end, only human."—P. D. Smith, Times Literary Supplement

"By the fall of 1922, Albert Einstein was among the most famous people in the world, a scientific celebrity who was about to win the Nobel Prize. This fascinating diary shows his human side as he travels to Japan, China, Singapore, Palestine, and Spain. The diligent and wise Einstein Papers editor Ze’ev Rosenkranz provides an annotated version that puts each entry into context and creates a treasure for scholars and Einstein fans."—Walter Isaacson, Tulane University and author of Einstein: His Life and Universe

"This is the very first book that offers concentrated and comprehensive discussions about Einstein's 1922–1923 trip to East Asia, Palestine, and Spain. None of Einstein's biographies so far have provided a clear, substantial discussion concerning Einstein's visit to East Asia. Meticulously documented, this invaluable book fills an important gap in our understanding of Einstein's life."—Danian Hu, author of China and Albert Einstein

"This diary is a faithful reflection of Einstein's quirky and pungent style, and should draw a broad readership."—Robert Schulmann, coeditor of Einstein on Politics

"This wonderful, thought-provoking book provides a translation of an original and accessible Einstein work that covers a remarkable period in his life, after he had become world famous, received the Nobel Prize, and found himself uncomfortably at the center of the turbulent politics of his time. This volume wears its impressive scholarship lightly and will be a tremendous resource for anyone interested in Einstein."—Daniel Kennefick, coauthor of An Einstein Encyclopedia