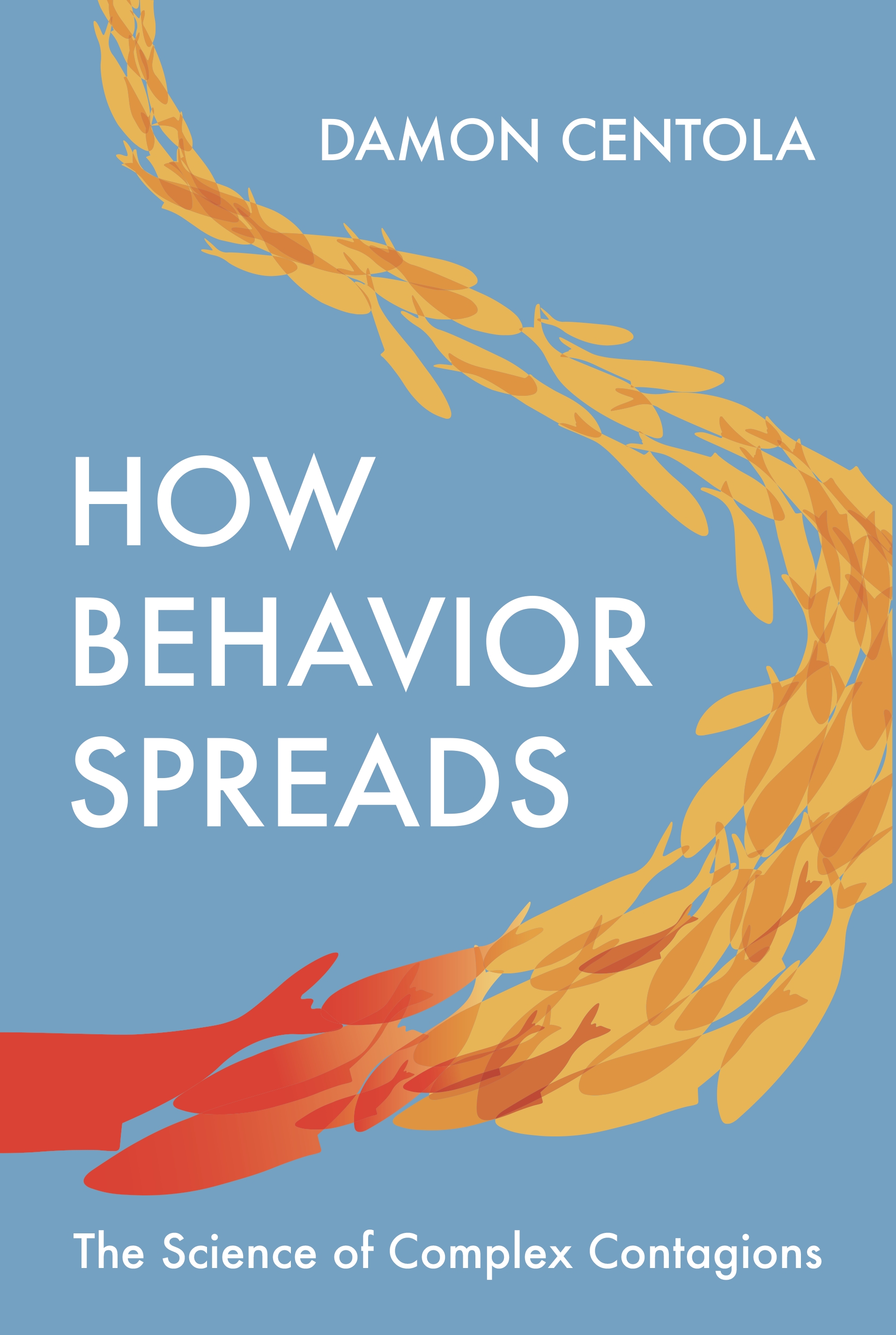 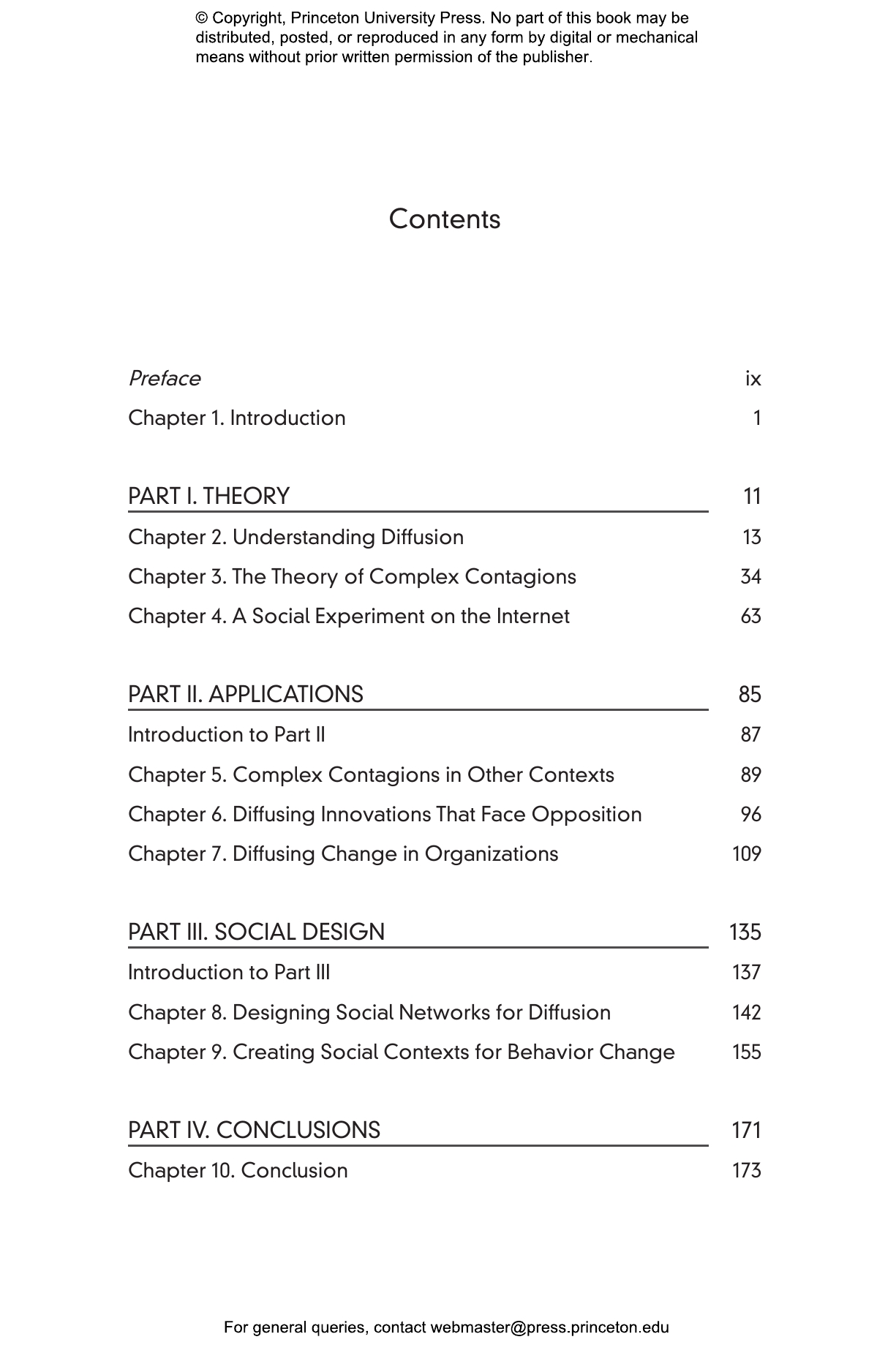 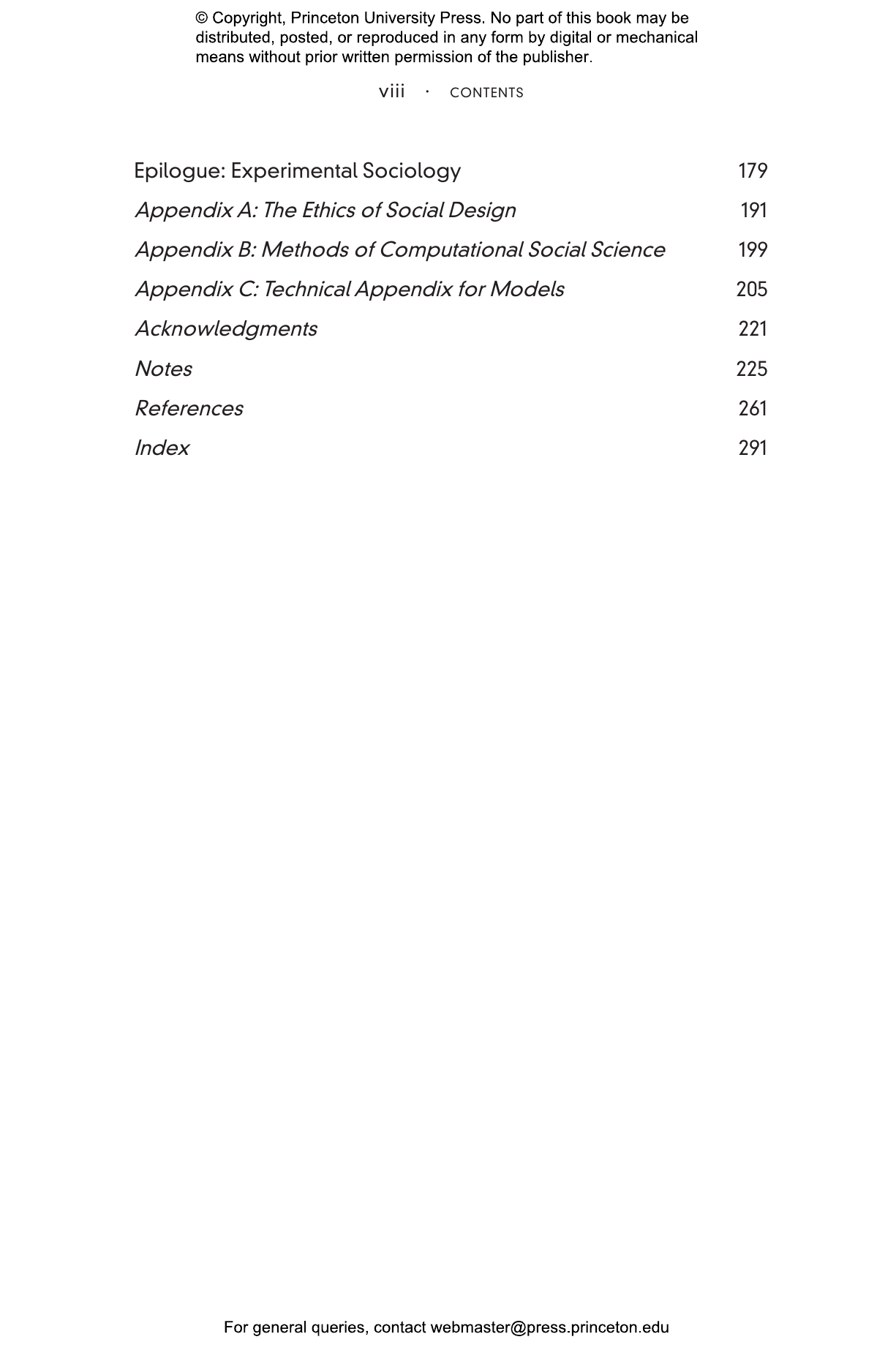 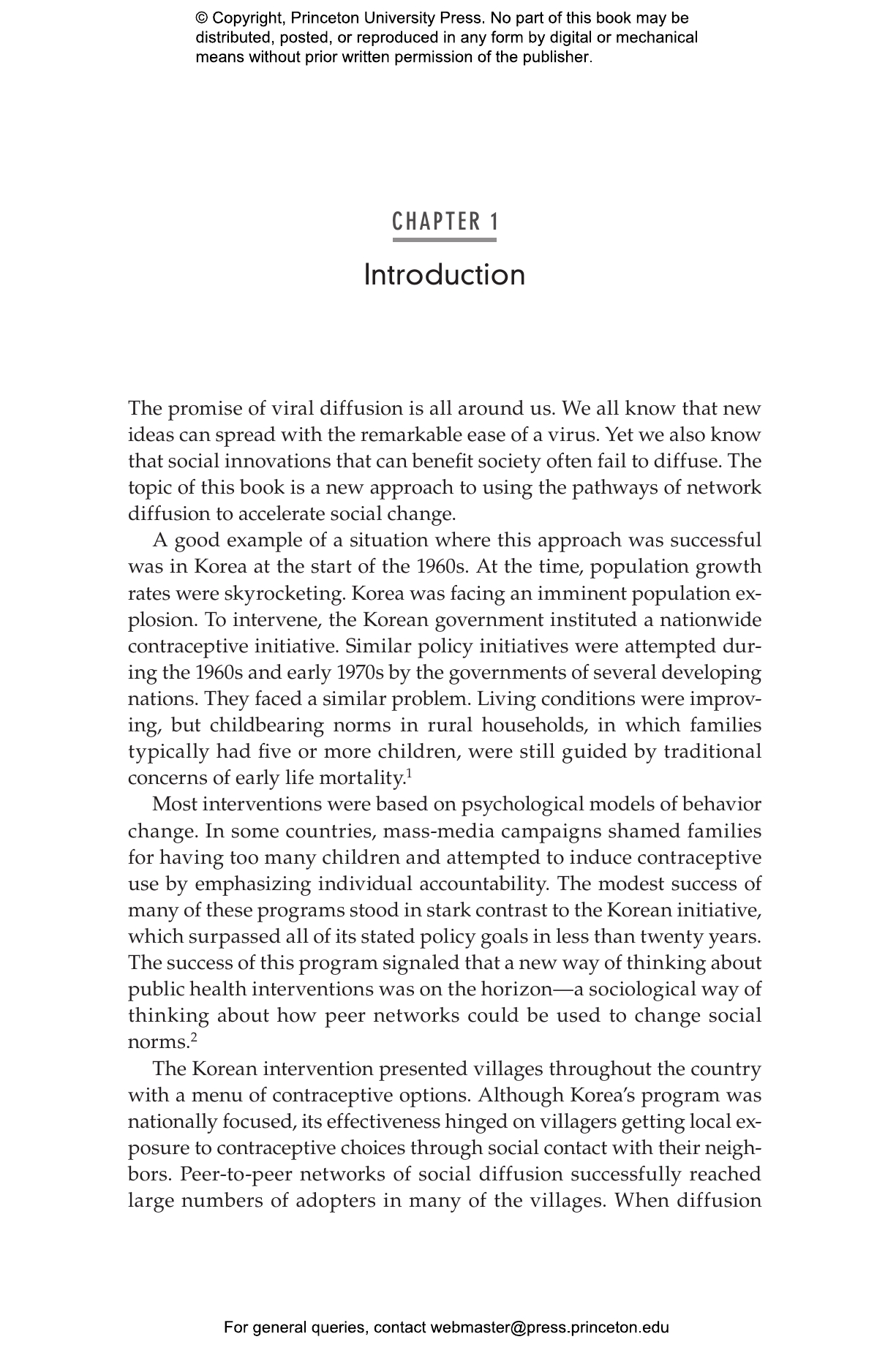 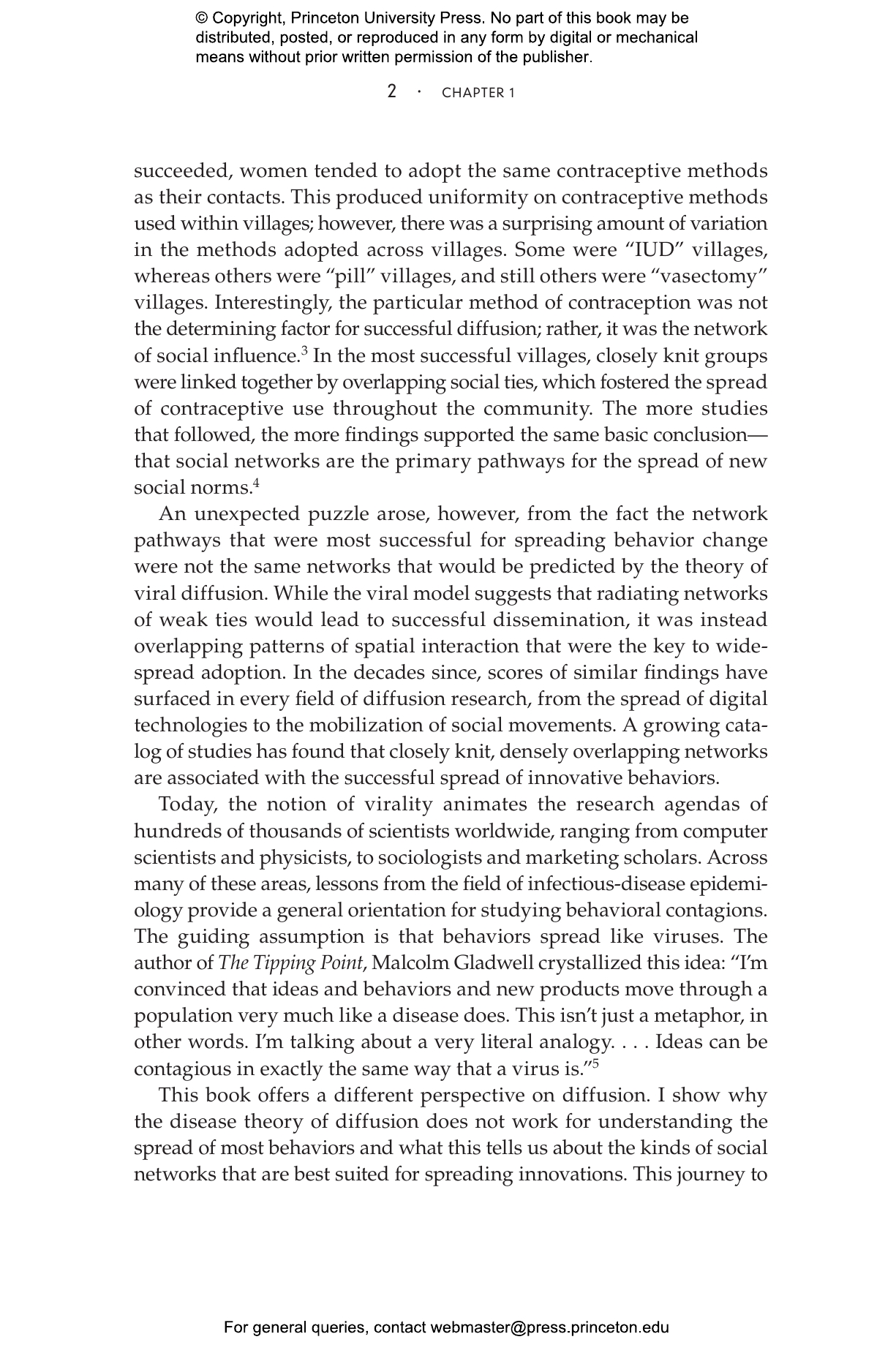 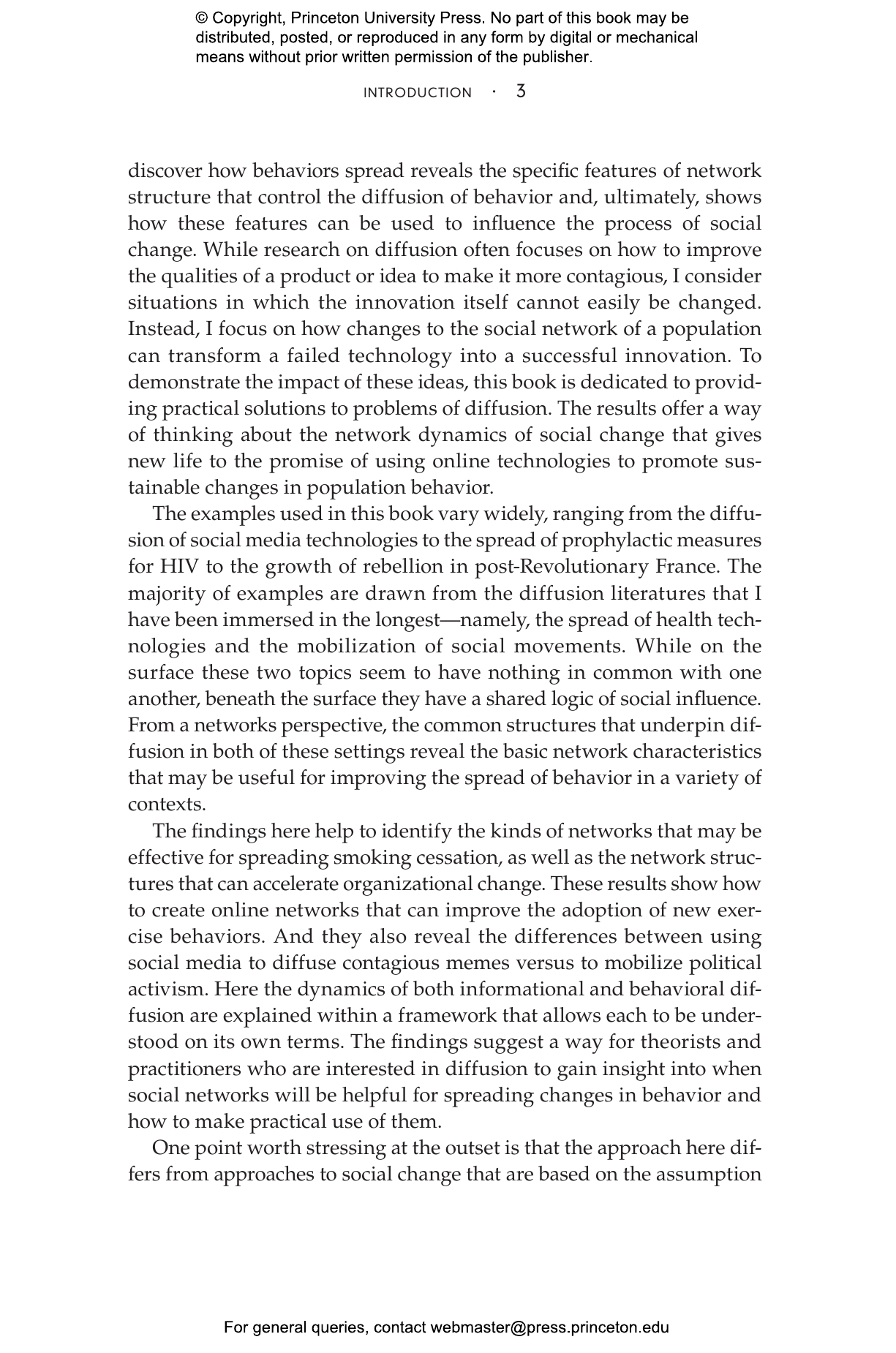 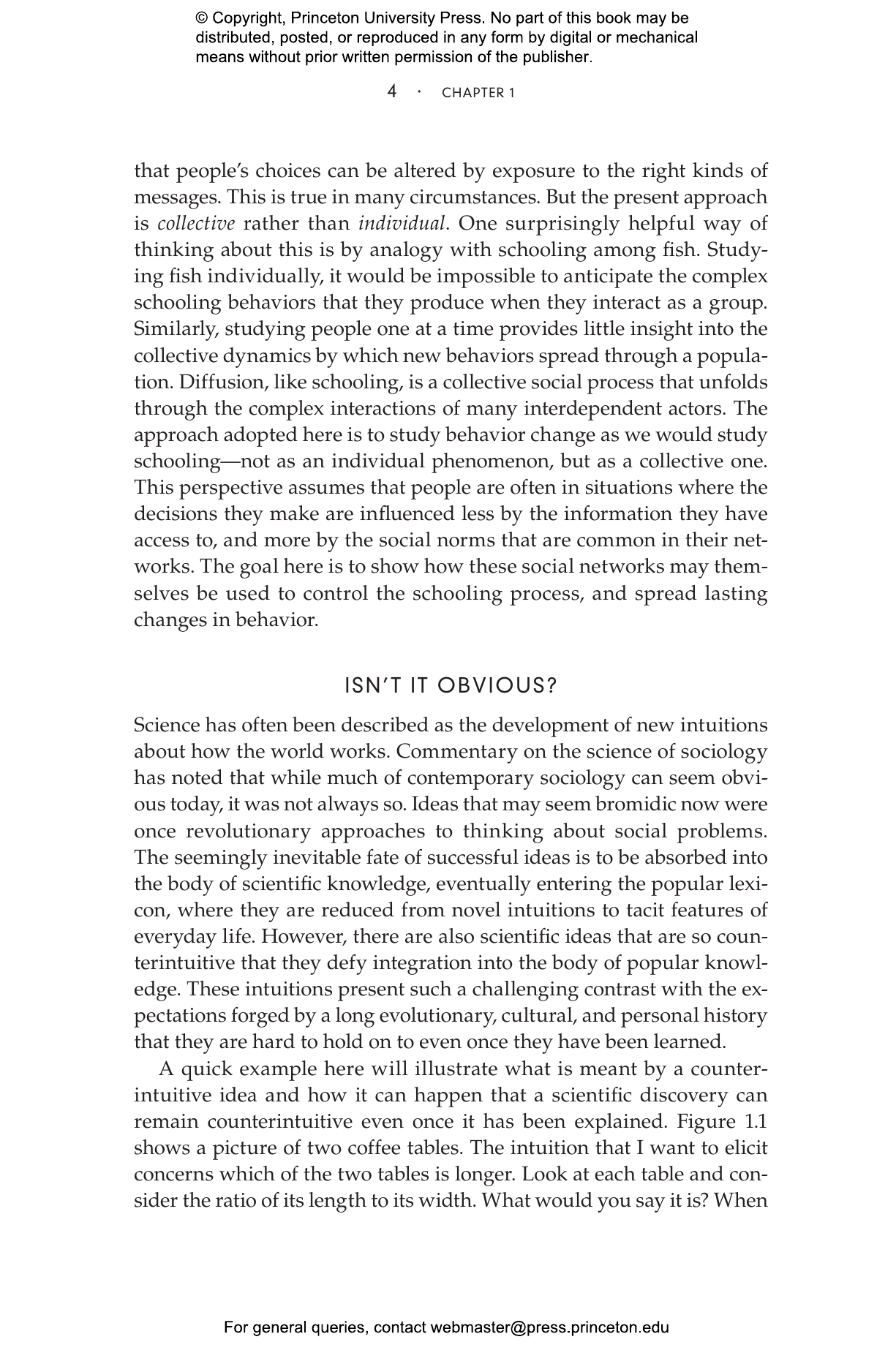 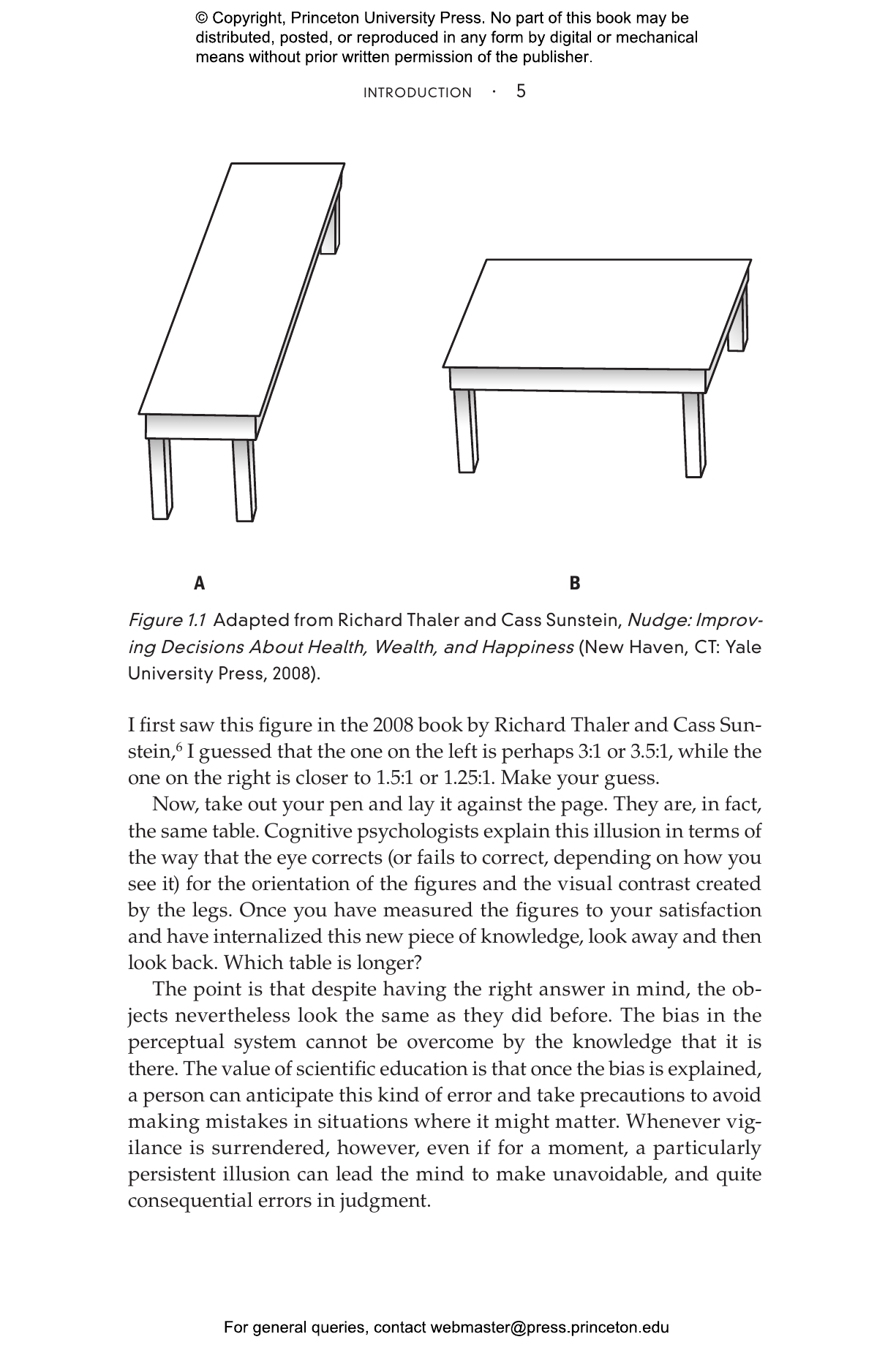 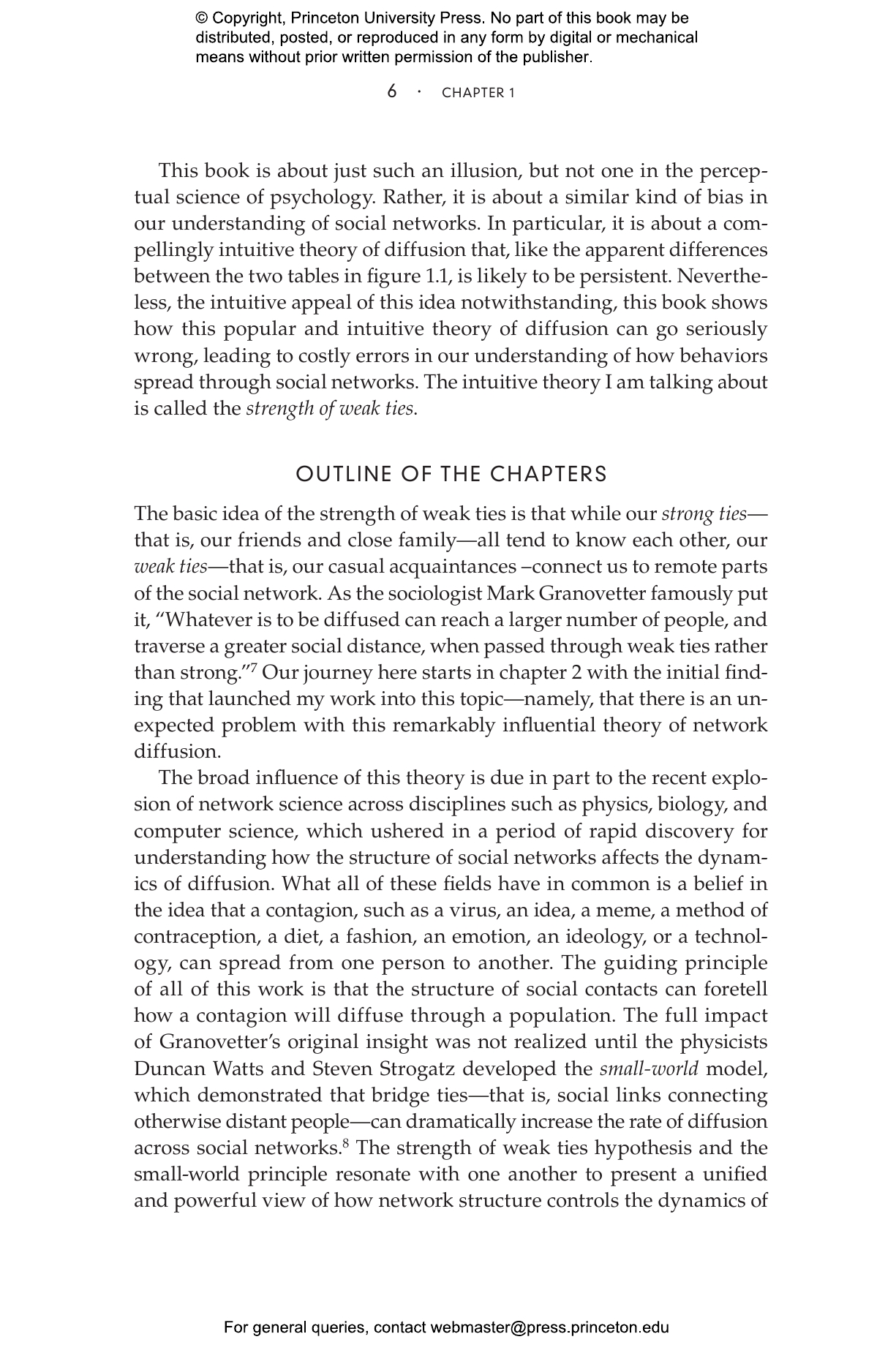 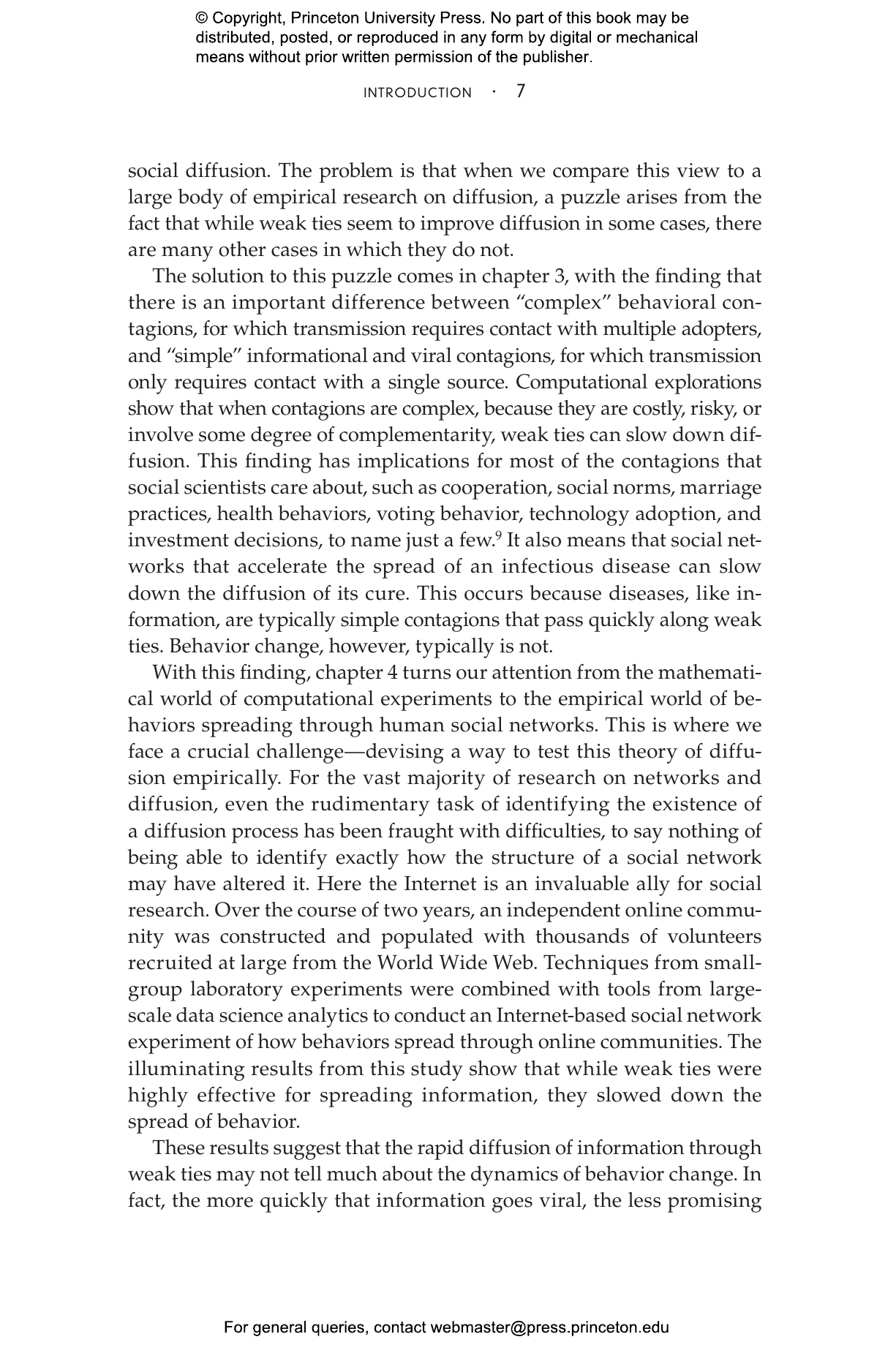 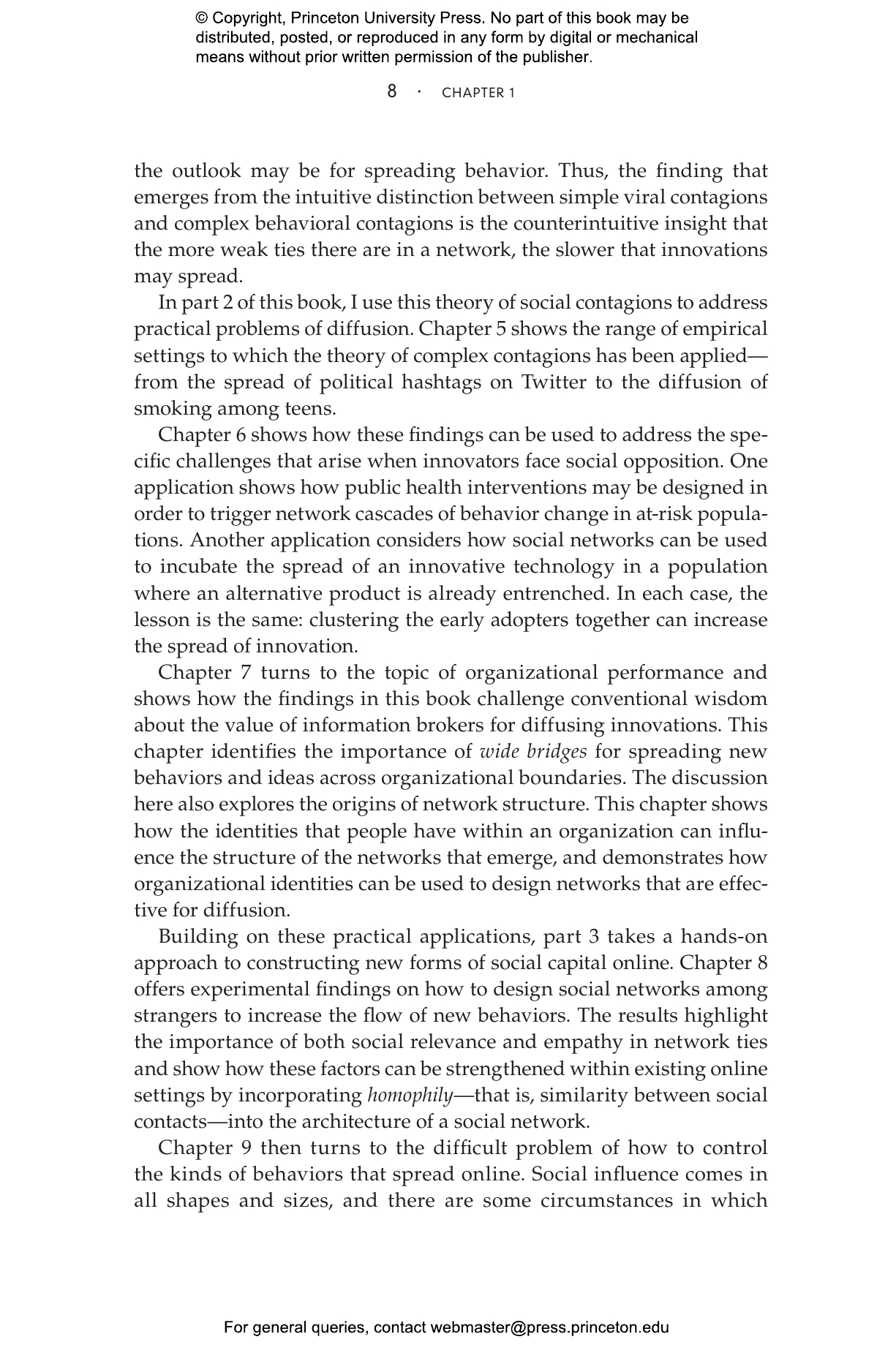 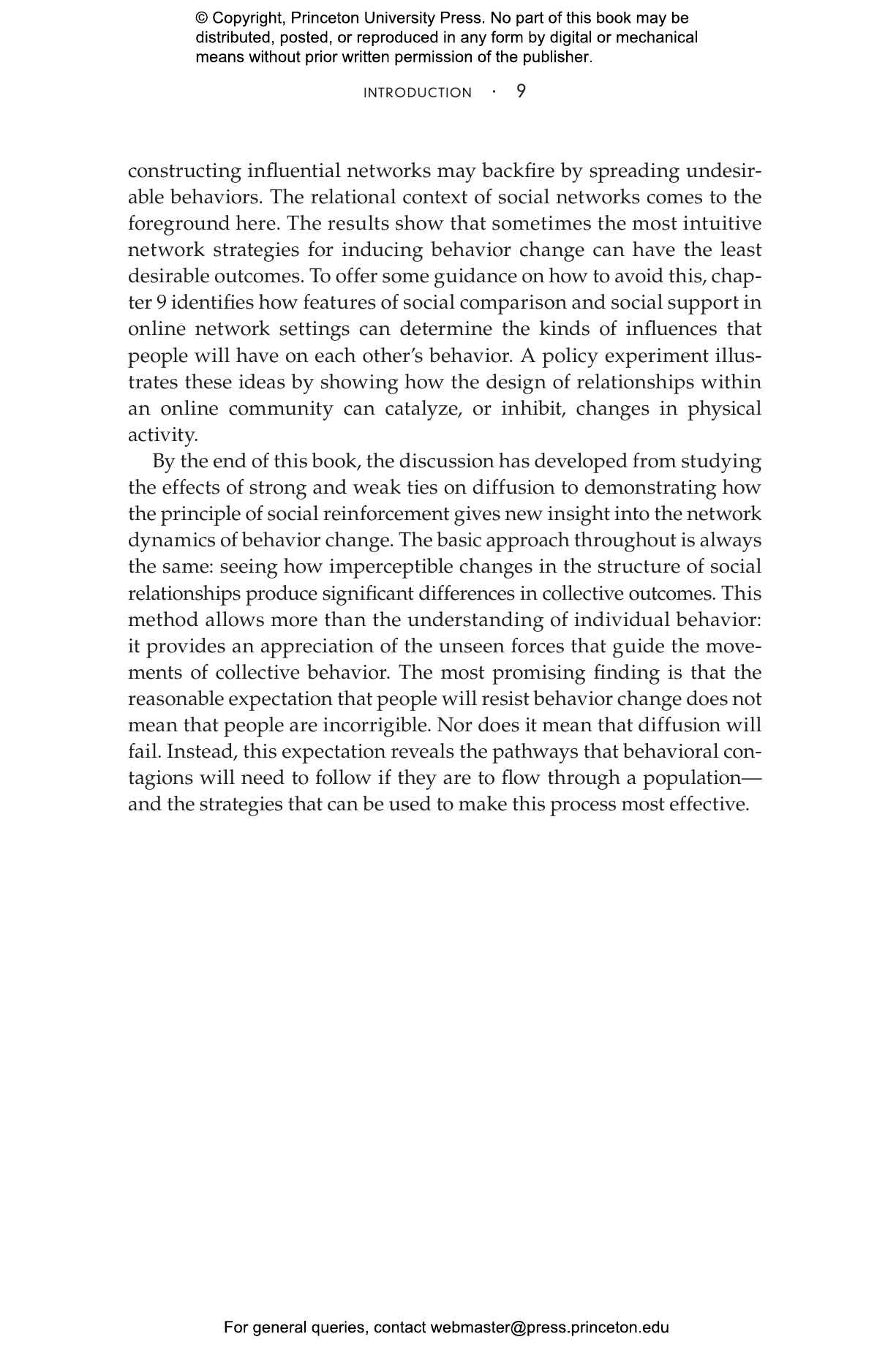 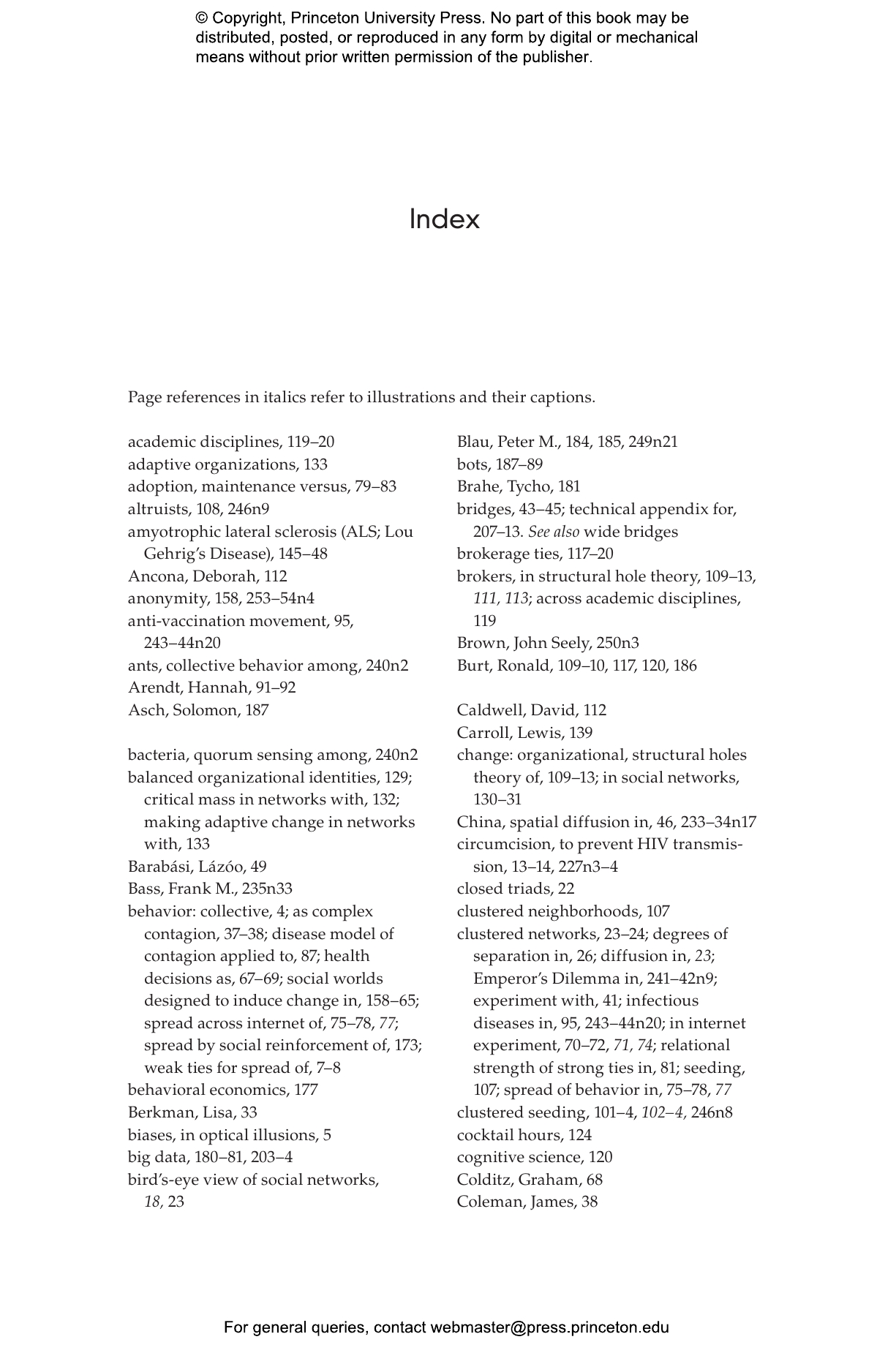 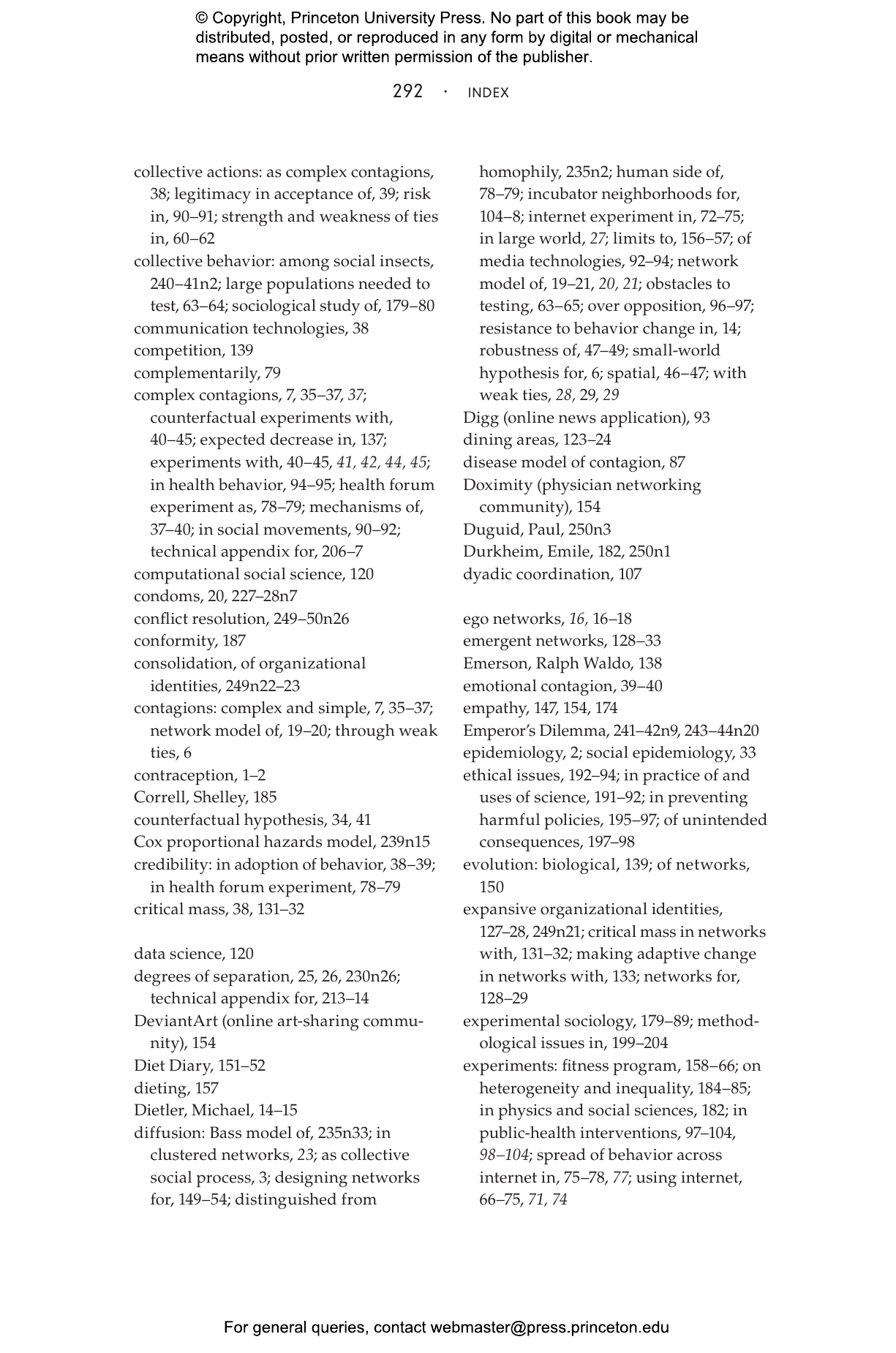 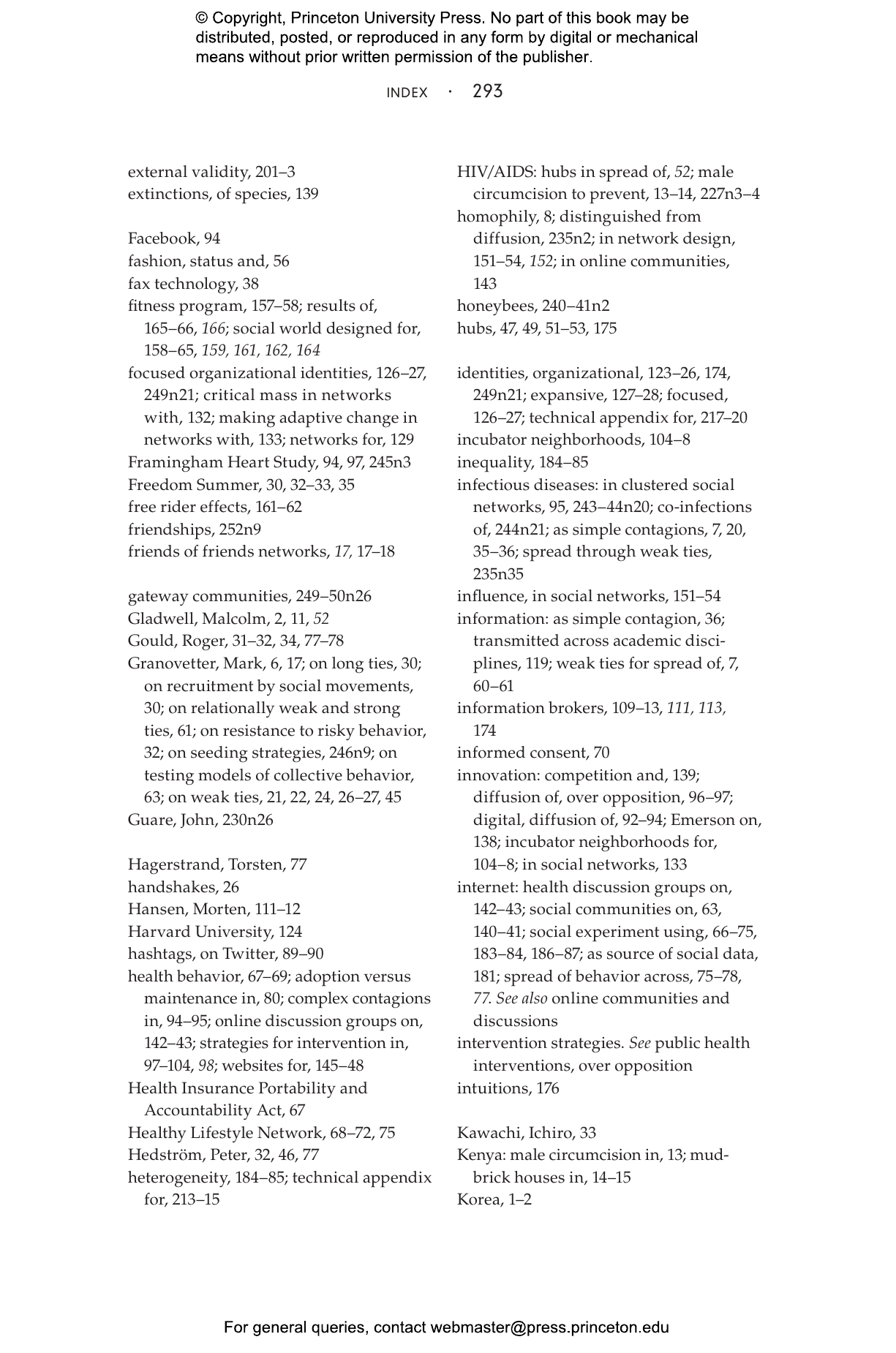 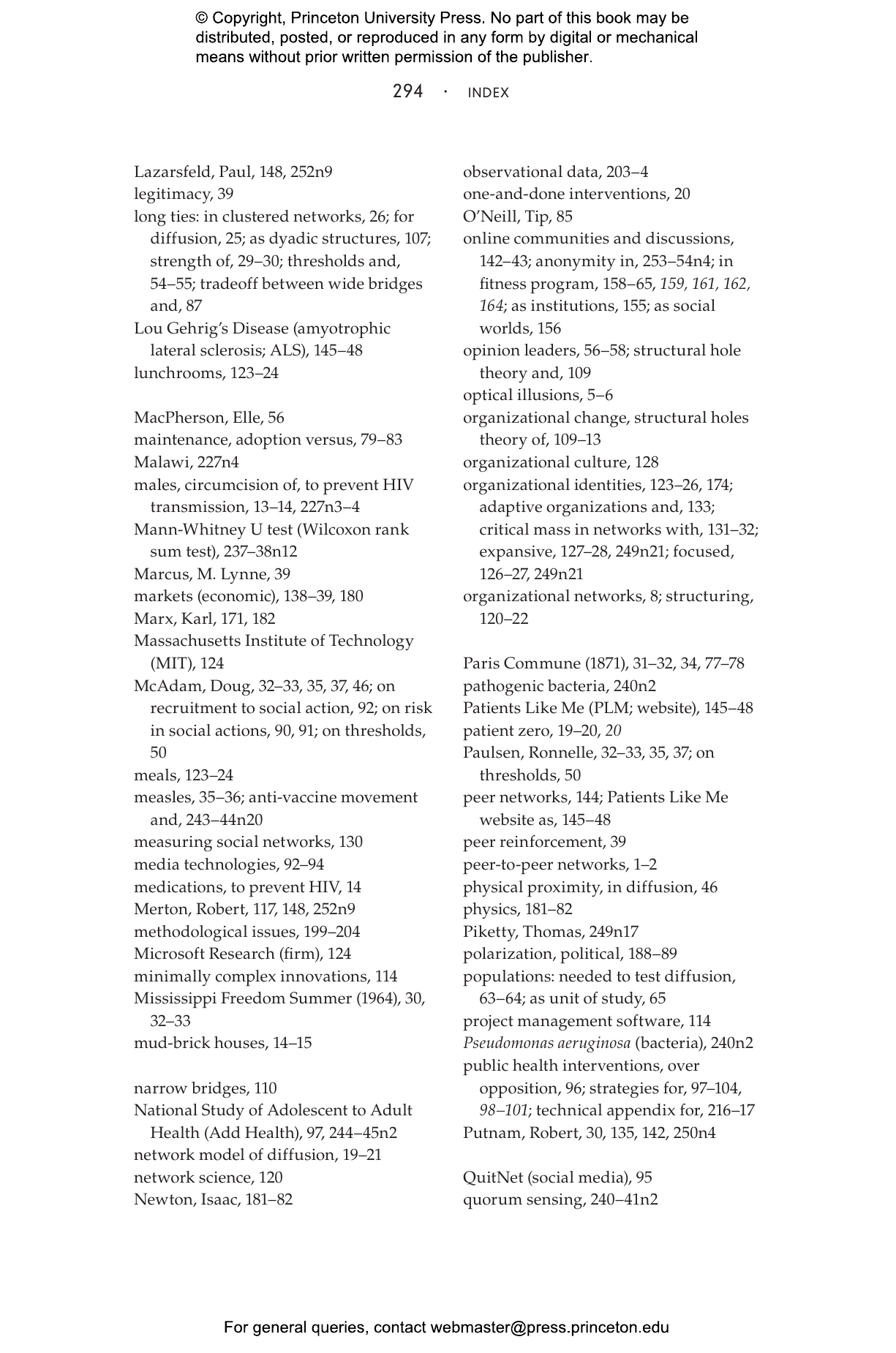 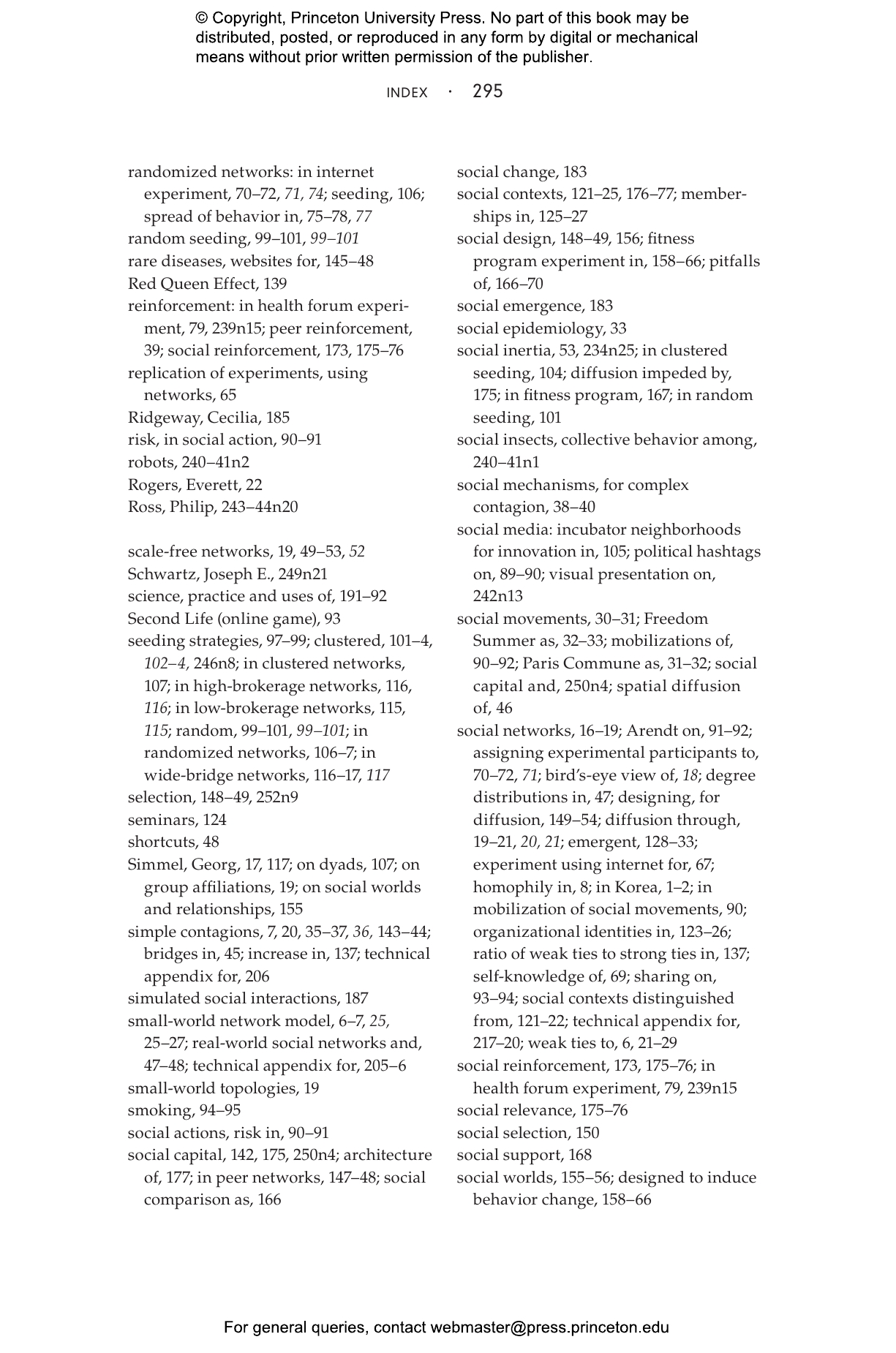 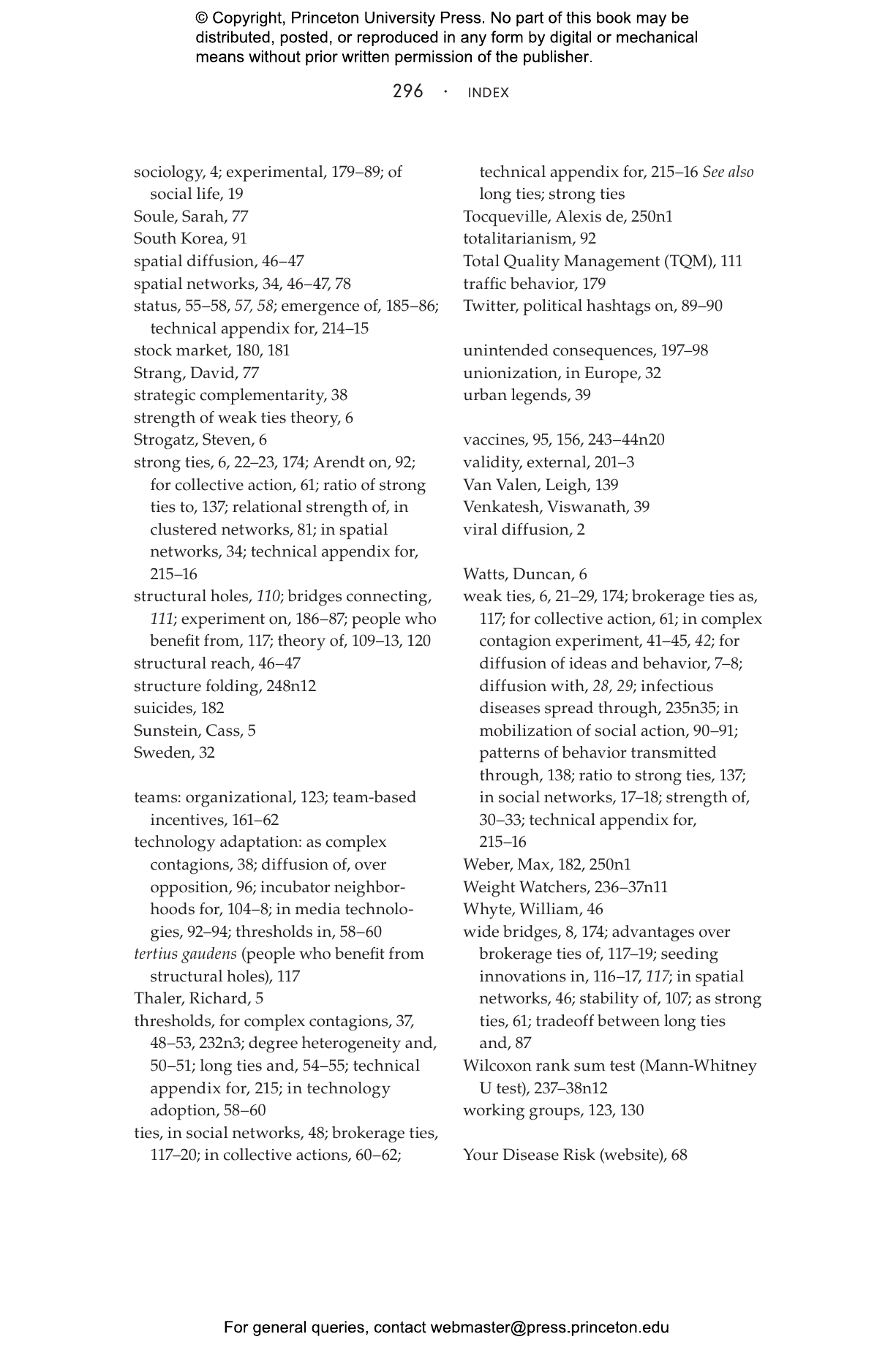 A new, counterintuitive theory for how social networks influence the spread of behavior 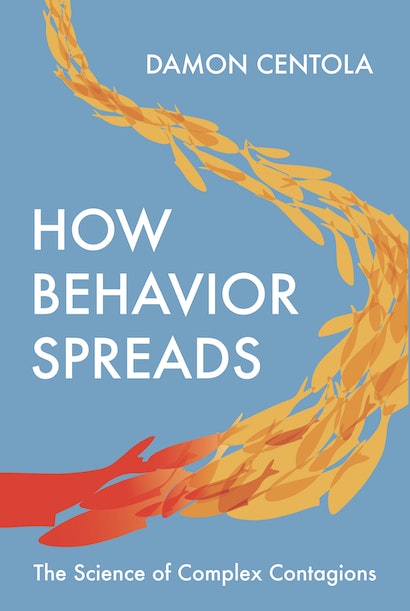 New social movements, technologies, and public-health initiatives often struggle to take off, yet many diseases disperse rapidly without issue. Can the lessons learned from the viral diffusion of diseases be used to improve the spread of beneficial behaviors and innovations? In How Behavior Spreads, Damon Centola presents over a decade of original research examining how changes in societal behavior — in voting, health, technology, and finance—occur and the ways social networks can be used to influence how they propagate. Centola’s startling findings show that the same conditions accelerating the viral expansion of an epidemic unexpectedly inhibit the spread of behaviors.

While it is commonly believed that “weak ties”—long-distance connections linking acquaintances—lead to the quicker spread of behaviors, in fact the exact opposite holds true. Centola demonstrates how the most well-known, intuitive ideas about social networks have caused past diffusion efforts to fail, and how such efforts might succeed in the future. Pioneering the use of Web-based methods to understand how changes in people’s social networks alter their behaviors, Centola illustrates the ways in which these insights can be applied to solve countless problems of organizational change, cultural evolution, and social innovation. His findings offer important lessons for public health workers, entrepreneurs, and activists looking to harness networks for social change.

Practical and informative, How Behavior Spreads is a must-read for anyone interested in how the theory of social networks can transform our world.

Damon Centola is an associate professor in the Annenberg School for Communications and the School of Engineering and Applied Sciences at the University of Pennsylvania, where he is director of the Network Dynamics Group. 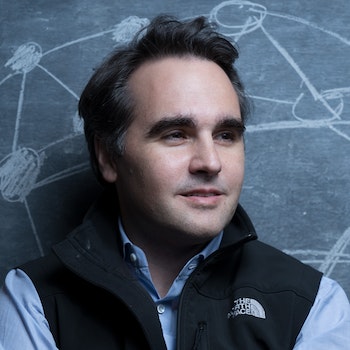 "[Centola’s] ideas have exciting implications for social engineering, whether related to vaccination adoption in the developing world or a reduction of energy use in the West. . . . [They] present an appealing possibility to meet one of the challenges of democracy in the internet age."—Nina Jankowicz, New Scientist

"Overall the book is well written and engaging, with plenty of discussion about the experiments that go into the conclusions, and on reading it, it is clear that there is a lot more to be done so that we can better implement lasting health strategies, and political engagement amongst many, many other complex behaviours."—Jonathan Shock, Mathemafrica

"In social networks, as in media networks, content matters—the types of behaviors that propagate through networks shape the kinds of structures best able to propagate them. Clearly and elegantly written, brimming with fresh ideas, and based on cutting-edge experimental techniques, How Behavior Spreads is an essential addition to the core bookshelves of social scientists who care about networks and social change."—Paul DiMaggio, Princeton University

"Just when we thought there was nothing new to say about diffusion through networks, along comes How Behavior Spreads. Filled with refreshing, novel arguments that distinguish simple from complex contagions, this book concludes with innovative online experiments and provocative proposals for beneficial social engineering. I urge widespread diffusion of its outstanding ideas."—Mark Granovetter, Stanford University

"Well-organized and well-written, How Behavior Spreads shows that complex and simple contagion processes are different, and that these differences are important for understanding a wide class of diffusion outcomes."—Peter Bearman, Columbia University

"Developing an original perspective on diffusion via networks, this book's model and evidentiary approach are distinctive."—Peter Marsden, Harvard University