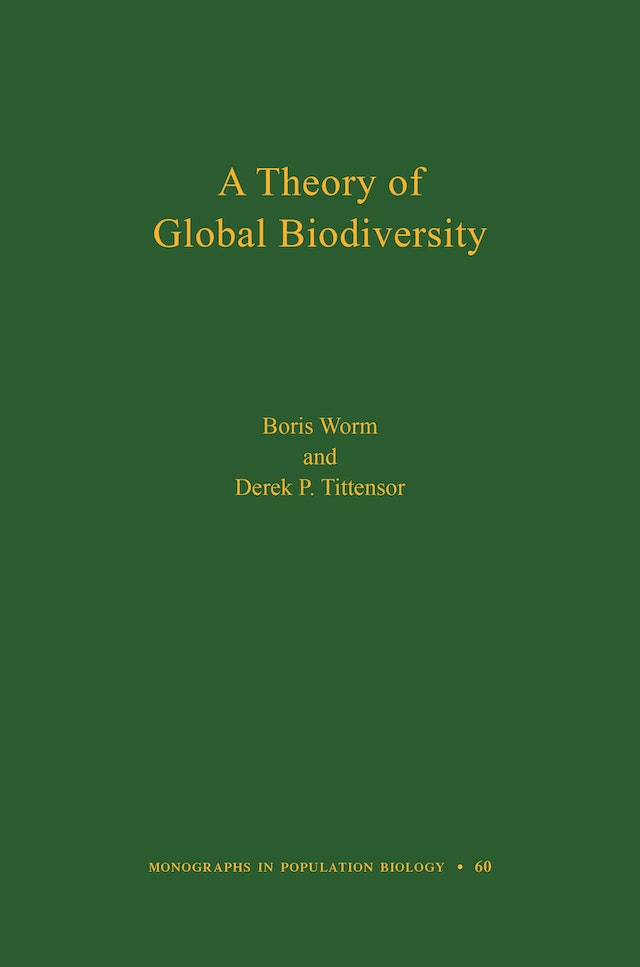 The number of species found at a given point on the planet varies by orders of magnitude, yet large-scale gradients in biodiversity appear to follow some very general patterns. Little mechanistic theory has been formulated to explain the emergence of observed gradients of biodiversity both on land and in the oceans. Based on a comprehensive empirical synthesis of global patterns of species diversity and their drivers, A Theory of Global Biodiversity develops and applies a new theory that can predict such patterns from few underlying processes.

The authors show that global patterns of biodiversity fall into four consistent categories, according to where species live: on land or in coastal, pelagic, and deep ocean habitats. The fact that most species groups, from bacteria to whales, appear to follow similar biogeographic patterns of richness within these habitats points toward some underlying structuring principles. Based on empirical analyses of environmental correlates across these habitats, the authors combine aspects of neutral, metabolic, and niche theory into one unifying framework. Applying it to model terrestrial and marine realms, the authors demonstrate that a relatively simple theory that incorporates temperature and community size as driving variables is able to explain divergent patterns of species richness at a global scale.

Integrating ecological and evolutionary perspectives, A Theory of Global Biodiversity yields surprising insights into the fundamental mechanisms that shape the distribution of life on our planet.

"I have been awaiting such a book for a long time. Worm and Tittensor combine three leading theoretical perspectives in ecology—neutral theory, metabolic theory, and niche theory—into a single, elegantly simple model to explain global patterns of species richness on land and in the sea. Their theory is novel, often surprising, and important in its implications for the future of biodiversity on Earth."—Stephen P. Hubbell, University of California, Los Angeles, and the Smithsonian Tropical Research Institute

"An impressive step forward in our quest to understand the patterns of life on this planet. This book will guide future research and inform the actions that we must prioritize to conserve biodiversity."—Cristiana Paşca Palmer, United Nations Assistant Secretary General and Executive Secretary of the Convention on Biological Diversity

"This eminently readable book probes the very heart of ecology and evolutionary biology by describing and explaining global patterns of species diversity. A landmark work and must-read for every serious student of living nature."—James Estes, author of Serendipity: An Ecologist’s Quest to Understand Nature

"This book is an outstanding contribution to the long-standing effort to account for the diversity of life on Earth. It summarizes the state of the science, presents a wealth of data on biodiversity in the oceans and on land, and develops a compelling new model to explain major patterns and processes. A Theory of Global Biodiversity sets an agenda for the next decade of research."—James H. Brown, coauthor of Biogeography

"The pattern of high diversity at the equator and declining diversity at the poles is one that holds true for many taxa, and a universal explanation for this pattern has long been sought by ecologists, naturalists, and evolutionary biologists, among others. This well-written and organized book brings simple mechanistic ecological and evolutionary theory to bear on the problem. There is no question that this is a significant contribution to the field."—Jay Stachowicz, University of California, Davis