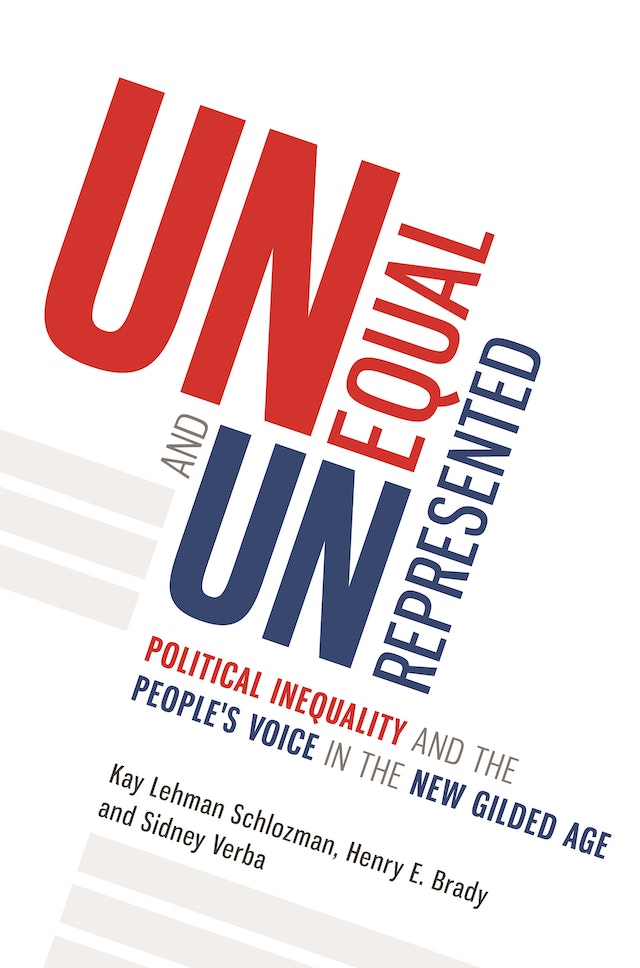 The Declaration of Independence proclaims equality as a foundational American value. However, Unequal and Unrepresented finds that political voice in America is not only unequal but also unrepresentative. Those who are well educated and affluent carry megaphones. The less privileged speak in a whisper. Relying on three decades of research and an enormous wealth of information about politically active individuals and organizations, Kay Schlozman, Henry Brady, and Sidney Verba offer a concise synthesis and update of their groundbreaking work on political participation.

The authors consider the many ways that citizens in American democracy can influence public outcomes through political voice: by voting, getting involved in campaigns, communicating directly with public officials, participating online or offline, acting alone and in organizations, and investing their time and money. Socioeconomic imbalances characterize every form of political voice, but the advantage to the advantaged is especially pronounced when it comes to any form of political expression — for example, lobbying legislators or making campaign donations—that relies on money as an input. With those at the top of the ladder increasingly able to spend lavishly in politics, political action anchored in financial investment weighs ever more heavily in what public officials hear.

"[Unequal and Unrepresented] is a valuable scholarly tool and a carefully constructed compilation of empirical evidence to support an argument whose conclusions are, as the authors write, ‘not especially encouraging.’"—Publishers Weekly

"Widening inequalities of income and wealth are causing widening inequalities of political voice, and the financial investments of the wealthy weigh ever more heavily in what public officials hear. This clear and concise book summarizes decades of research by three of the nation’s leading political scientists, showing beyond question how disparities in political voice are endangering American democracy. Read, and take action."—Robert B. Reich, University of California, Berkeley

"Schlozman, Brady, and Verba have done it again, updating their exemplary work on political participation in its many forms. Deeply informed by extensive social science research, this book’s findings—about the numerous ways economic inequality deforms our politics—should trouble all of us."—Peter H. Schuck, Yale University

"Three cheers for this addition to Schlozman, Brady, and Verba’s canonical research on political participation and inequality in the United States. For the lucky readers who are being introduced to their work for the first time, Unequal and Unrepresented offers an intellectual treat and political awakening. These authors have done more than any others to show how and why political inequality occurs and how Americans can alleviate it."—Jennifer L. Hochschild, Harvard University

"In Unequal and Unrepresented, Schlozman, Brady, and Verba brilliantly continue their pathbreaking work on how unequal wealth and income translate into unequal political influence. While their research shows that the inequalities of money and voice have worsened, the authors do leave us with some reason for hope."—Robert Kuttner, coeditor of The American Prospect and author of Can Democracy Survive Global Capitalism?

"From the distinguished triumvirate of Schlozman, Brady, and Verba—leading experts on how inequality shapes political participation—comes this fresh and powerful book. The dynamics they identify combine to tilt the participatory universe, so that the affluent make their views known loudly to elected officials while the poor can only whisper. Unequal and Unrepresented is a tour de force and must-read for those who care about democracy."—Suzanne Mettler, author of Degrees of Inequality

"With compelling data and striking examples, this worthy book explores findings about the nature of citizen participation and voice. A brilliant crystallization of these eminent authors' many insights."—Andrea L. Campbell, author of Trapped in America's Safety Net

"This carefully researched book contends that political voice is biased in favor of those with more essential resources—money, skills, time, experience, etc.—and that this shapes the output of the political process in a way that extends these inequalities. This argument is important and the book deserves a wide readership."—L. Sandy Maisel, author of American Political Parties and Elections