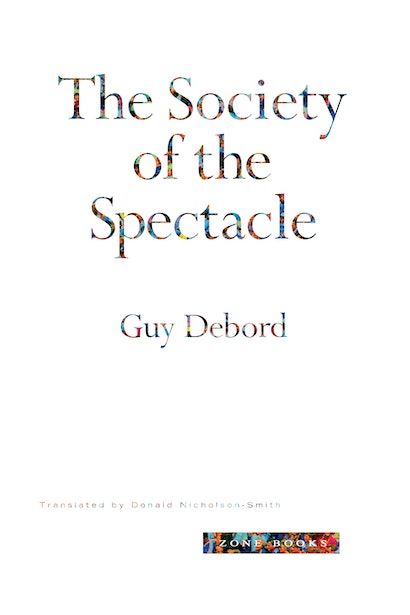 Few works of political and cultural theory have been as enduringly provocative as Guy Debord’s Society of the Spectacle. From its publication amid the social upheavals of the 1960s to the present, the volatile theses of this book have decisively transformed debates on the shape of modernity, capitalism, and everyday life in the late twentieth century. Now finally available in a superb English translation approved by the author, Debord’s text remains as crucial as ever for understanding the contemporary effects of power, which are increasingly inseparable from the new virtual worlds of our rapidly changing image / information culture.

“In all that has happened in the last twenty years, the most important change lies in the very continuity of the spectacle. Quite simply, the spectacle’s domination has succeeded in raising a whole generation moulded to its laws. The extraordinary new conditions in which this entire generation has lived constitute a comprehensive summary of all that, henceforth, the spectacle will forbid; and also all that it will permit.”— Guy Debord (1988)