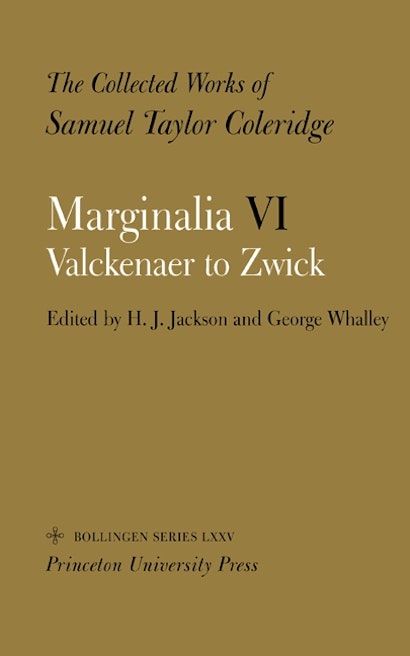 In his introduction to this edition of Coleridge’s Marginalia, the late George Whalley wrote, ”There is no body of marginalia — in English, or perhaps in any other language — comparable with Coleridge’s in range and variety and in the sensitiveness, scope, and depth of his reaction to what he was reading.” The Princeton edition of the Marginalia, of which this is the sixth volume, brings together over eight thousand notes, many never before printed, varying from a single word to substantial essays. In alphabetical order of authors, the notes are presented literatim from the original manuscripts whenever the annotated volumes can be found. Each note is preceded by the passage of the original text that appears to have provoked Coleridge’s comment. Texts in foreign languages are followed by translations.


The present volume comprises annotations on more than fifty books and manuscripts (from Valckenaer to Zwick, plus Addenda), including comments on Wordsworth’s ”Benjamin the Waggoner,” ”The Prelude,” and ”Translation of Virgil’s Aeneid,” as well as on William Godwins’s verse drama ”Abbas.” A key-word index to the six volumes of Marginalia, provided here, will give readers ready access to Coleridge’s ideas on subjects ranging from literature and philosophy through religion, politics, history, biography, and science.

"This remarkable volume concludes one of the magisterial scholarly projects of our time. . . . The patience, knowledge, and sometimes-slavish devotion involved in editing such a work are beyond praise. . . . The cumulative effect produces something akin to awe. The set as a whole rivals his notebooks in bringing the reader into the intimate presence of Coleridge's mind and astonishing breadth of his intellectual interests."—Choice