A literary and cultural history of coral—as an essential element of the marine ecosystem, a personal ornament, a global commodity, and a powerful political metaphor 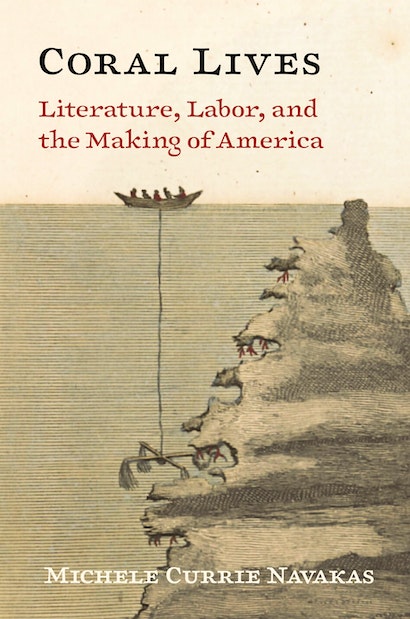 Today, coral and the human-caused threats to coral reef ecosystems symbolize our ongoing planetary crisis. In the nineteenth century, coral represented something else; as a recurring motif in American literature and culture, it shaped popular ideas about human society and politics. In Coral Lives, Michele Currie Navakas tells the story of coral as an essential element of the marine ecosystem, a cherished personal ornament, a global commodity, and a powerful political metaphor. Drawing on a wide range of sources, including works by such writers as Sarah Josepha Hale, Harriet Beecher Stowe, Frances Ellen Watkins Harper, and George Washington Cable, Navakas shows how coral once helped Americans to recognize both the potential and the limits of interdependence—to imagine that their society could grow, like a coral reef, by sustaining rather than displacing others.

Navakas shows how coral became deeply entwined with the histories of slavery, wage labor, and women’s reproductive and domestic work. If coral seemed to some nineteenth-century American writers to be a metaphor for a truly just collective society, it also showed them, by analogy, that society can seem most robust precisely when it is in fact most unfree for the laborers sustaining it. Navakas’s trailblazing cultural history reveals that coral has long been conceptually indispensable to humans, and its loss is more than biological. Without it, we lose some of our most complex political imaginings, recognitions, reckonings, and longings.

Michele Currie Navakas is associate professor of English and an affiliate of the Institute for the Environment and Sustainability at Miami University of Ohio. She is the author of Liquid Landscape: Geography and Settlement at the Edge of Early America.

“Coral—now rare and vanishing, once ubiquitous and proliferating—was embedded in nineteenth-century America. In this original and fascinating book, Michele Currie Navakas shows how diverse Americans used coral to think through changing formations of labor, capitalism, and life—human and otherwise. Navakas’s study stretches across oceans and dives into them, recovering the cultural work of coral from global politics to the smallest red-orange bead on an enslaved child’s neck. An exciting contribution to the environmental humanities, this lustrous book tells us why coral mattered to the nineteenth-century imagination—and why we need coral to think with now.”—Robin Bernstein, author of Racial Innocence: Performing American Culture from Slavery to Civil Rights

“Coral Lives is a thought-provoking ocean-centric history of human relationships with the sea. Navakas imaginatively considers the cultural and material valuations that Atlantic Africans, members of the African diaspora, and Indigenous peoples throughout the Americas and Pacific affixed to coral and how white Americans and Europeans drew upon this knowledge to harvest coral, employing it as models for complex social relationships.”—Kevin Dawson, author of Undercurrents of Power: Aquatic Culture in the African Diaspora

“Navakas’s scholarship is utterly sound; her writing is fluid and clear. She stakes out new ground in this first cultural biography of American coral.”—Susan Scott Parrish, University of Michigan

“This study is an extraordinarily significant contribution to the field. Navakas weaves her argument out of a stunning array of source materials, presenting new data but also new conceptions and interpretations.”—Marion Rust, University of Kentucky