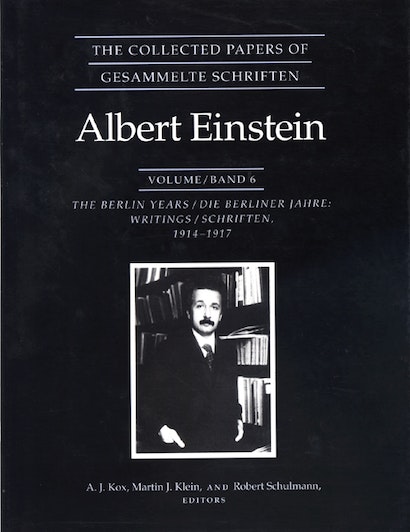 Presented in this volume are Albert Einstein’s writings from his arrival in Berlin in the spring of 1914 to take up his new position at the Prussian Academy of Sciences through the end of 1917. During these years he completed the general theory of relativity — the relativistic theory of gravitation — and this was surely the high point of his scientific life. His writings on relativity in this volume range from general treatments of the theory to detailed calculations of specific consequences and his first attempt at a relativistic account of cosmology. They also include his popular exposition of the special and general theories, first published in 1917 and still a valuable account for the general reader.


As soon as the difficulties on the path to general relativity had been overcome, Einstein returned to the riddles of the quantum theory. His major clarification of the quantum theory of radiation appears here along with his lesser known contribution to the formulation of quantum conditions. This volume also contains the papers describing Einstein’s only experimental investigation, a study of Ampère’s molecular currents, which he carried out with the Dutch physicist W. J. de Haas.


Before the beginning of World War I, Einstein had never expressed his views on nonscientific subjects. Yet one of his first reactions to this previously unthinkable general war was to sign an “Appeal to Europeans” urging an immediate end to hostilities.


Every document in The Collected Papers of Albert Einstein appears in the language in which it was written.

A. J. Kox teaches history of science at the University of Amsterdam. Martin J. Klein is Professor of the History of Science at Yale University and Senior Editor of The Collected Papers of Albert Einstein. Robert Schulmann is Assistant Professor of History at Boston University.