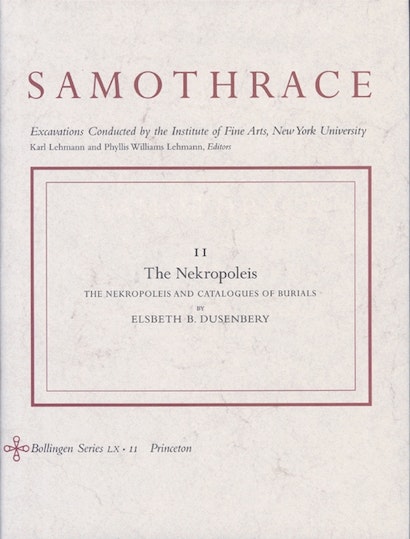 The Sanctuary of the Great Gods on the island of Samothrace was a renowned center of religious life in the northern Aegean from the seventh century b.c. until the fourth century after Christ, and the mysteries practiced there rank in historical importance with those of Eleusis. From the beginning of Macedonian supremacy, Philip II and his successors embellished the Sanctuary with great buildings of innovative design for both pious and political ends. Volume 11 of this series focuses primarily on excavations of the southern (S) Nekropolis.


Originally outside the archaeological zone, the S Nekropolis was rediscovered in 1954, when an alert Samothracian youth spotted pottery and other objects sliding down the steep bank of the torrent bed east of the Sanctuary. Karl Lehmann immediately dispatched members of the staff to rescue what would soon be washed away. The small area then excavated along the slope and the edge of the stream bank proved so interesting that it was decided to undertake further excavation. Digging produced objects ranging from the Archaic Greek period to the Roman era. Discovered were a great numbers of ceramics (ranging from Attic figured wares to previously unknown types); gold, silver, and bronze jewelry; glass vessels; and more. Five campaigns of excavation were carried out between 1957 and 1966. Subsequent years have been devoted to the restoration and study of the recovered objects. The materials are cross- referenced in two volumes by type and by the locations in which they were found.